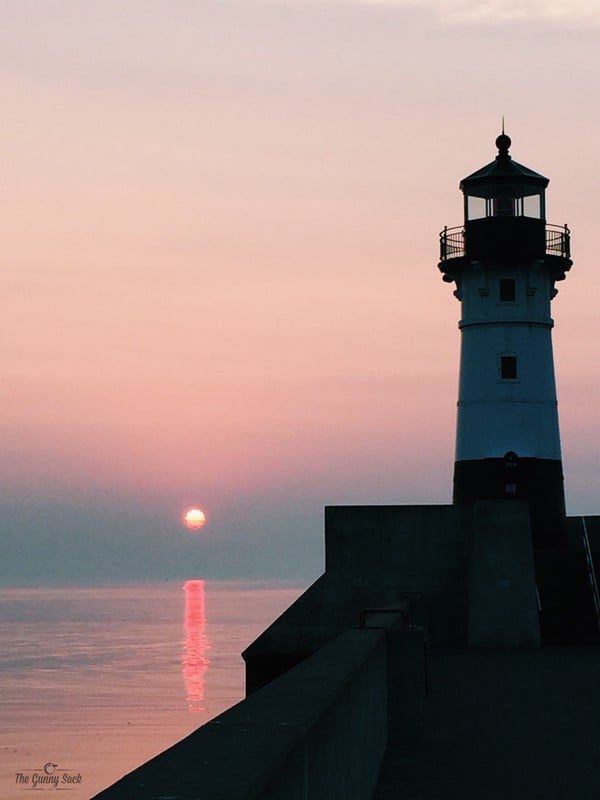 I spent the weekend in Duluth, Minnesota with some of my girlfriends and we had the most wonderful, relaxing weekend. One of my friends is due to have a baby at the end of the month. She wanted to have a girlfriends getaway before the baby arrives and she asked us to join her. I wanted to share some of the pictures I took over the weekend and maybe inspire you to visit the North Shore of Lake Superior! 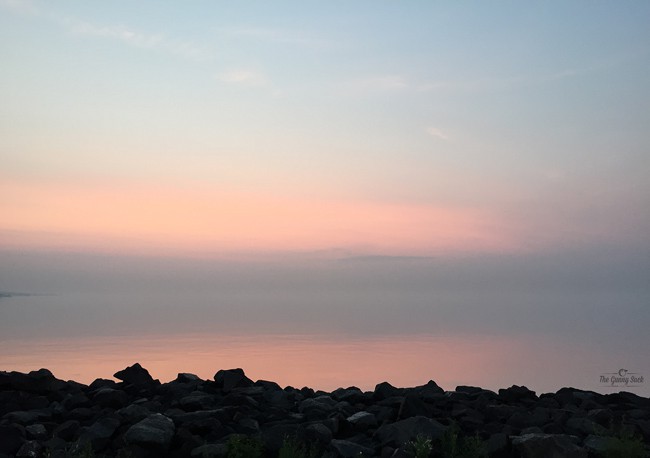 It’s never easy to get up at 5:00 am while on vacation to see the sunrise (and the lack of people we saw proves that) but it’s ALWAYS worth it! We walked out the hotel and this is what we saw.  It was a foggy morning and it was hard to tell where the sky ended and Lake Superior started. 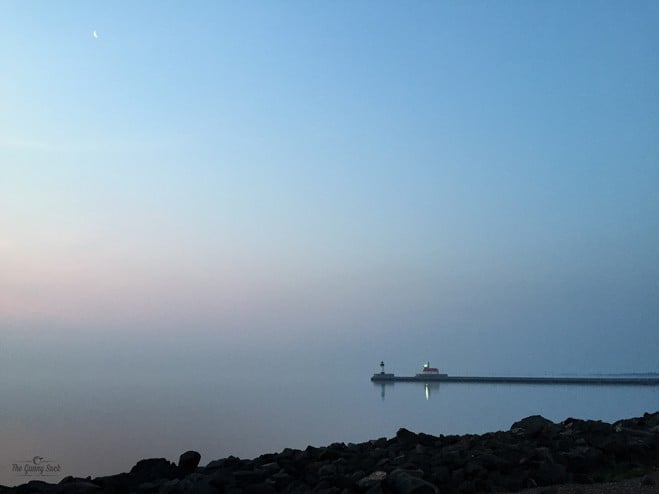 As we walked down to the lighthouse, we were in awe of how still Lake Superior was. It was already warm and humid at 5:15 in the morning, which is unusual for Duluth.

The lighthouses were sounding what I though was a foghorn but when I checked online, I found out that the foghorn is no longer in operation and the coast guard sounds a “peanut whistle” instead. 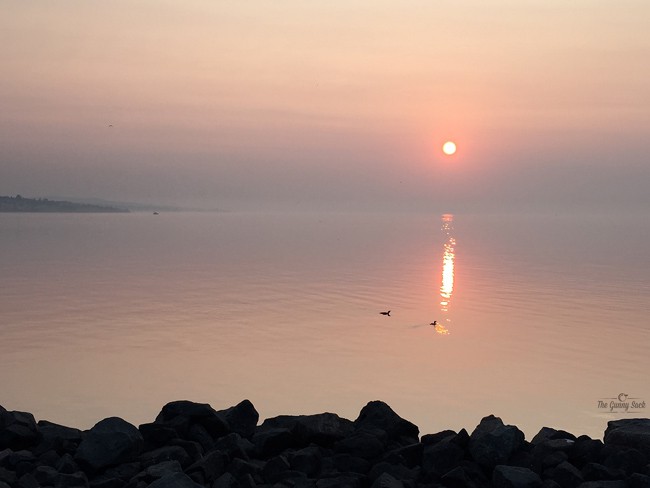 While walking back to the hotel, these loons popped up out of the water. The common loon is the Minnesota state bird. Loon’s are excellent underwater swimmers. They can dive as deep as 250 feet and stay under water for up to 5 minutes! 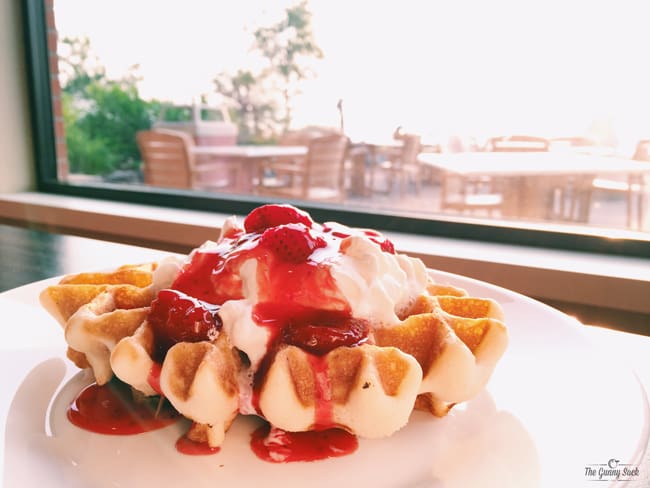 Breakfast at our hotel, overlooking the lake, was waffles with strawberries and cream, scrambled eggs, fried potatoes, sausage, fresh fruit, coffee and doughnuts. 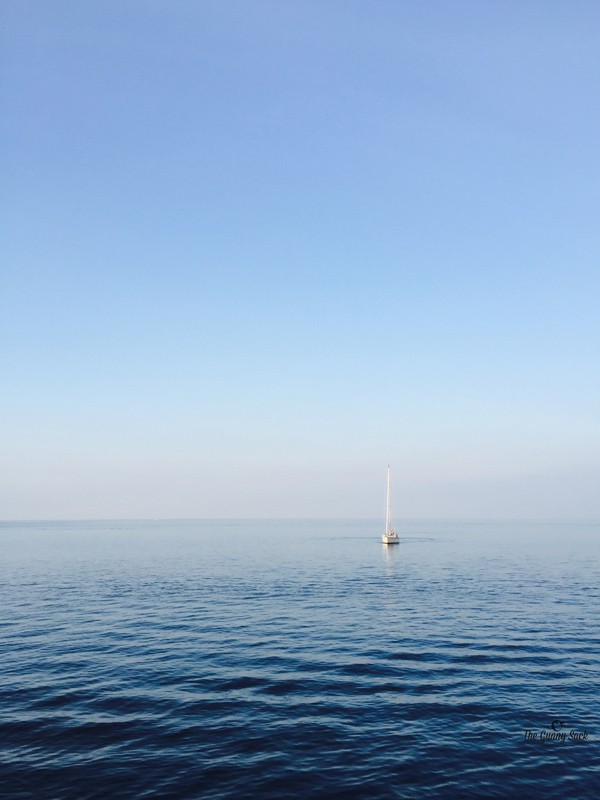 We walked almost 17,000 steps on Saturday! We didn’t get back into our car until it was time to leave for home. Everything we needed was in walking distance from the hotel. 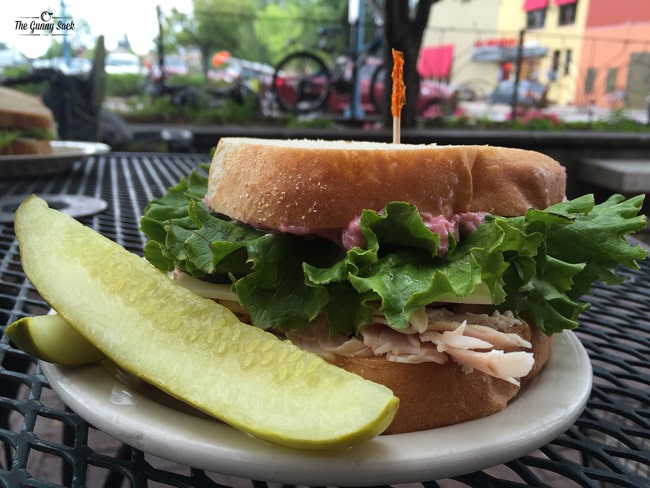 My lunch was this sandwich called a Lakewalk Special from Amazing Grace Cafe. It had hickory smoked turkey breast, lettuce, cucumber, tomato, swiss cheese, and cranberry mayo on classic French bread. I had this same sandwich two days in a row and wish I was having another one today! 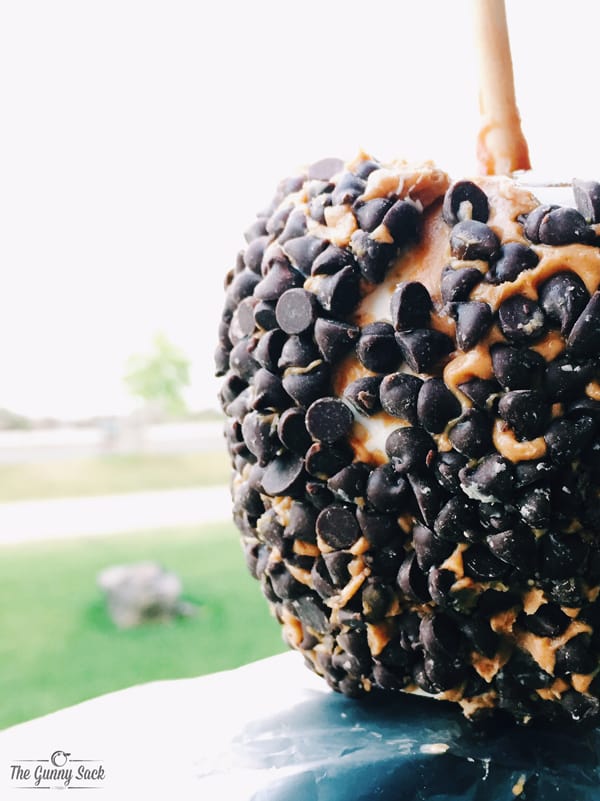 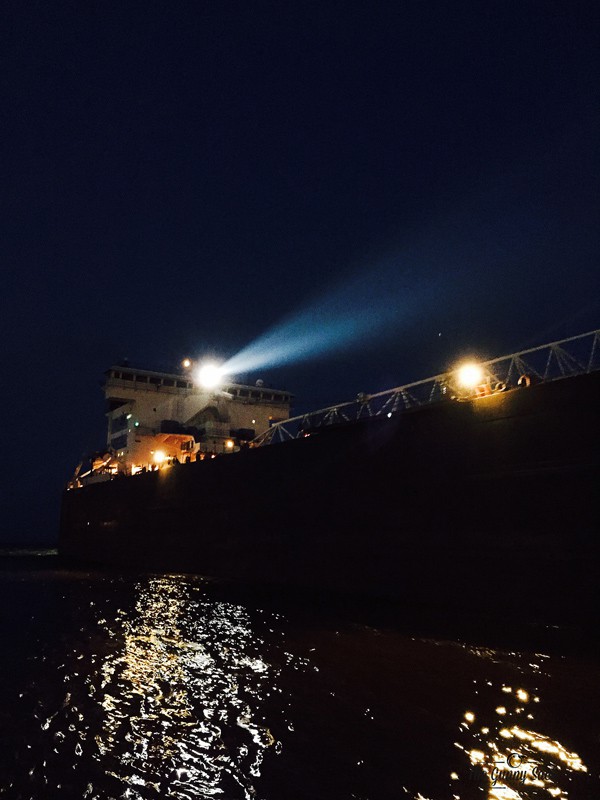 After spending the evening sitting on the boardwalk outside our hotel, drinking coffee and visiting, we walked down to Canal Park to watch a ship called the Indiana Harbor come in. It’s always fun to see the ships come in at night! 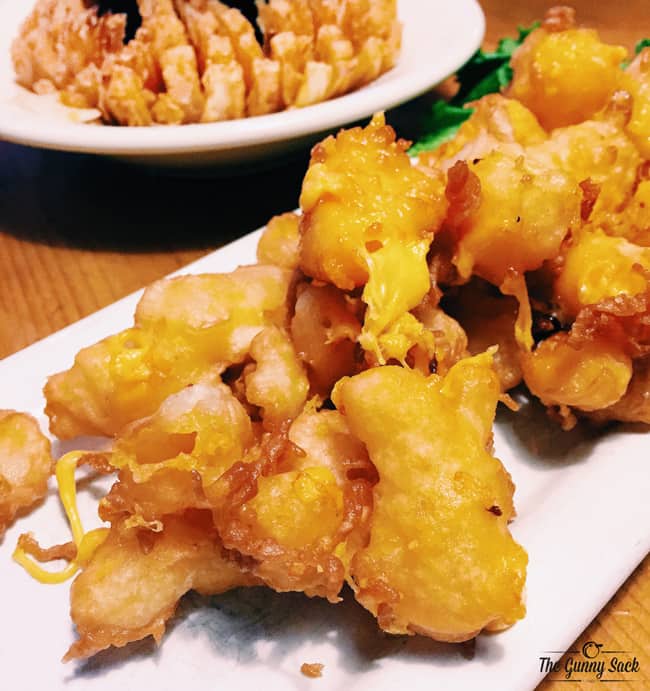 The most fantastic part of the two dinners we had were these fried cheese curds. Ohhhh…were they good! I had chicken fajitas one night and steak the other, but neither were that spectacular. I feel like I am getting old when I don’t enjoy a meal at a restaurant because I know I can make it better at home. Does that ever happen to you? You can find my recipe for steak here: How To Cook Steak and my cheese curds recipe here: Fried Cheese Curds 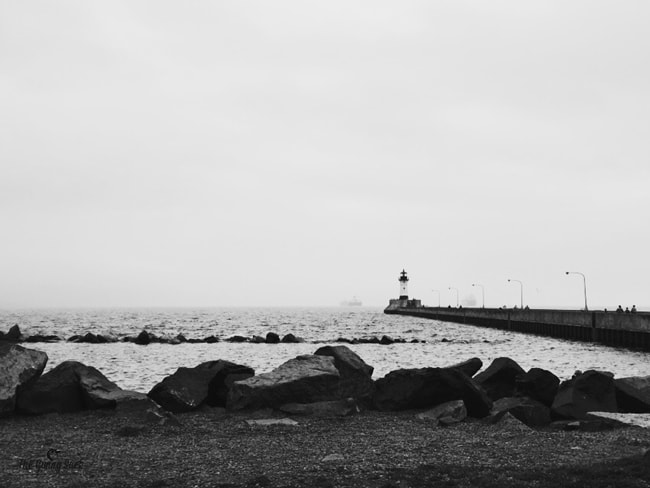 The second morning was much cooler with more wind. Since it was cloudy, we slept in, rather than getting up early for the sunrise. In this picture, you can see one ship anchored out in Lake Superior and another that had just departed. 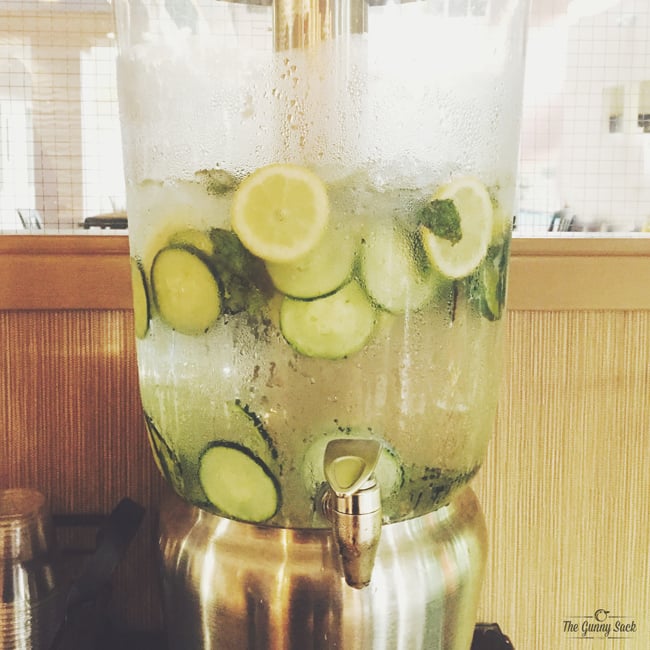 We drank countless cups of the Cucumber Lemon and Mint water that our hotel kept in the lobby. It was the perfect thing to grab when we got back from our walks. 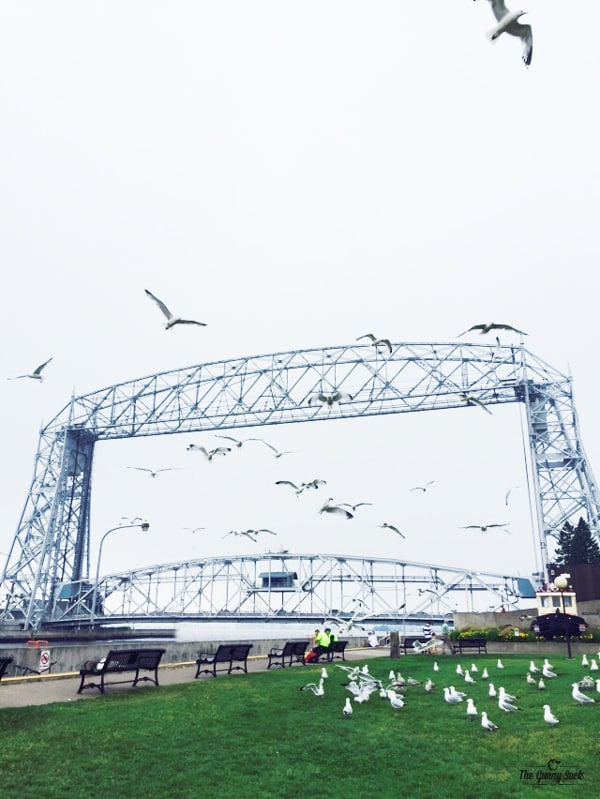 Seagull feeding was in full force. I’m not sure who was more delighted, the seagulls or the kids. 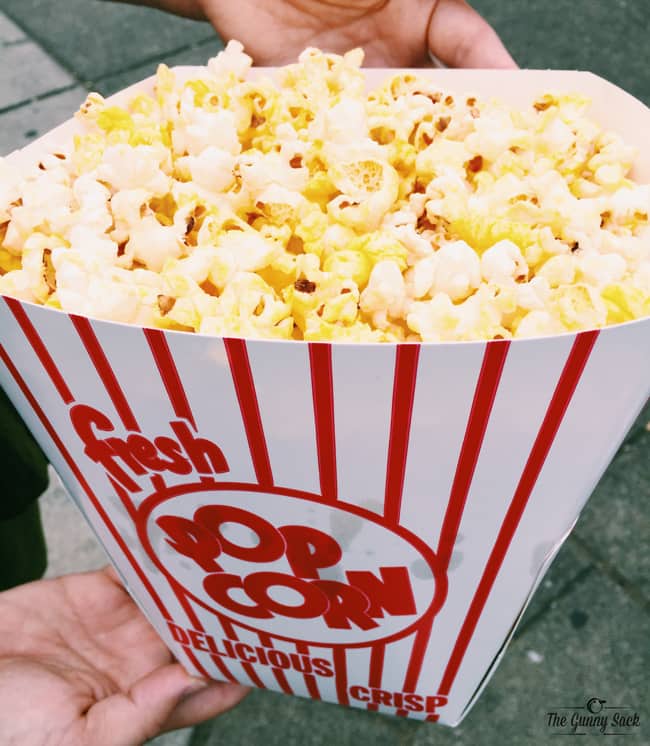 We enjoyed the popcorn down at Canal Park and did not share with the birds.

In addition to all the walking, eating, ship watching and visiting we did, we spent some serious quality time in the chaise lounges by the rooftop pool at our hotel. I even took a couple of naps by the pool! It was such a fabulous weekend in Canal Park in Duluth, Minnesota and we hope we can do it again next summer.