I had the wonderful opportunity last week to have a Disney Princess party for the girls in my life! We had some big princesses, some little princesses and my friend was even crowned queen. We had such a lovely time and it was a perfect celebration of friendship and summer fun. The princesses were adorable and they were so happy to be at the party. We ate lunch and dessert, played a princess board game, made a couple of princess crafts, decorated a castle on the wall and filled treat bags with all sorts of princess items! 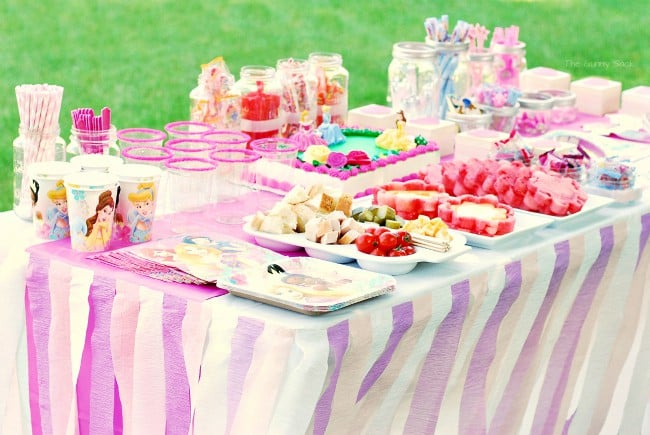 The guests arrived at 11:30 and everyone was hungry for lunch! We used Hallmark Disney Princess plates, napkins and cups that I found at Walmart in the party aisle with the party favors. The party food was simple but fun. We had sandwiches on a stick with fruit in the shape of a flower. There was also Disney Princess candy but that had to be saved for after lunch. 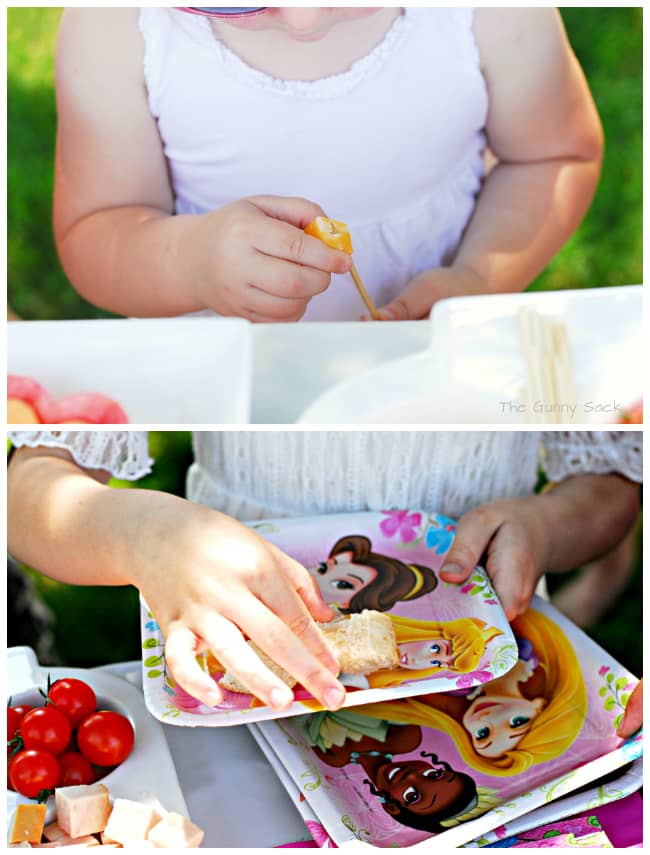 The princesses had fun assembling and eating their sandwiches on a stick. 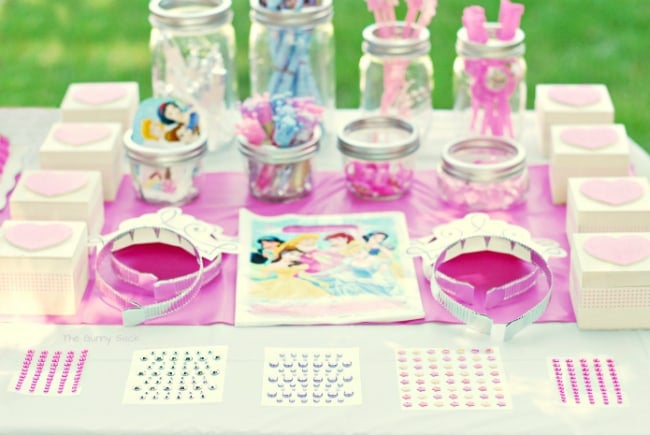 Christine and Vanessa set up most of the party table while I was picking up the cake from Walmart the morning of the party. 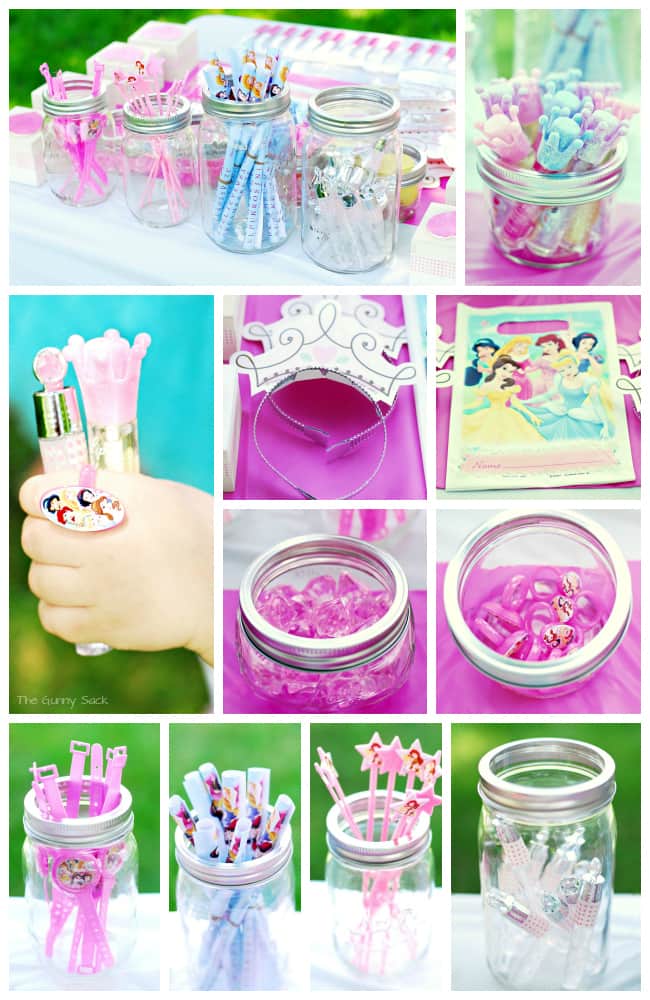 Besides a couple of things that I already owned, like the bubbles on the bottom right, I bought all of the party supplies at Walmart! They have a HUGE selection of  party supplies! You can find out more about my shopping trip here. The Disney Princess watches, game scrolls, wands and rings were all part of a party favor pack that came with the gift bags. I found the tiaras in the Hallmark party section and the Disney Princess lip gloss with sparkly crowns on top are from the toy department. I put pink dotted washi tape around various sized mason jars and placed all of the party favors in them. That way the girls could easily fill their bags! 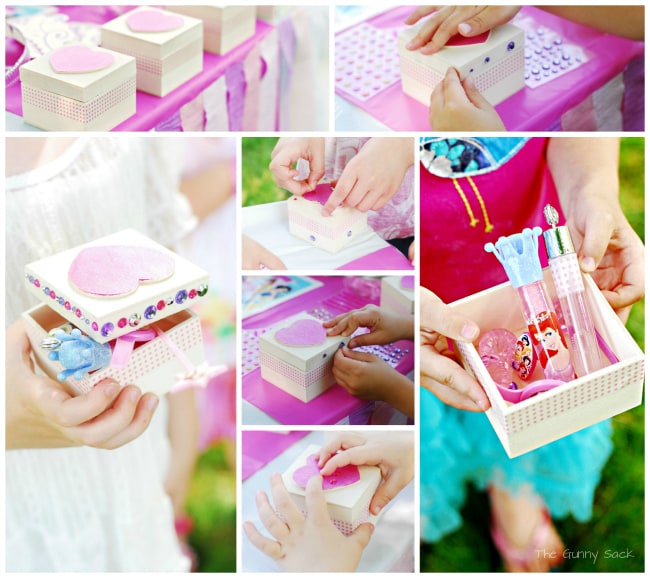 I wanted the girls to have a couple of crafty things to do at the party. I found plain wooden boxes at Walmart and painted the hearts on the top with glitter paint. I added some of the same pink dotted washi tape that I used for the jars. The girls added self adhesive gems to the boxes. They really enjoyed adding all of those sparkles! The activity was simple enough that they didn’t get frustrated but it wasn’t so basic that they got bored. Then, they filled the boxes with some of the princess party favors like rings, gems, lip gloss, bubbles and a pretend watch. 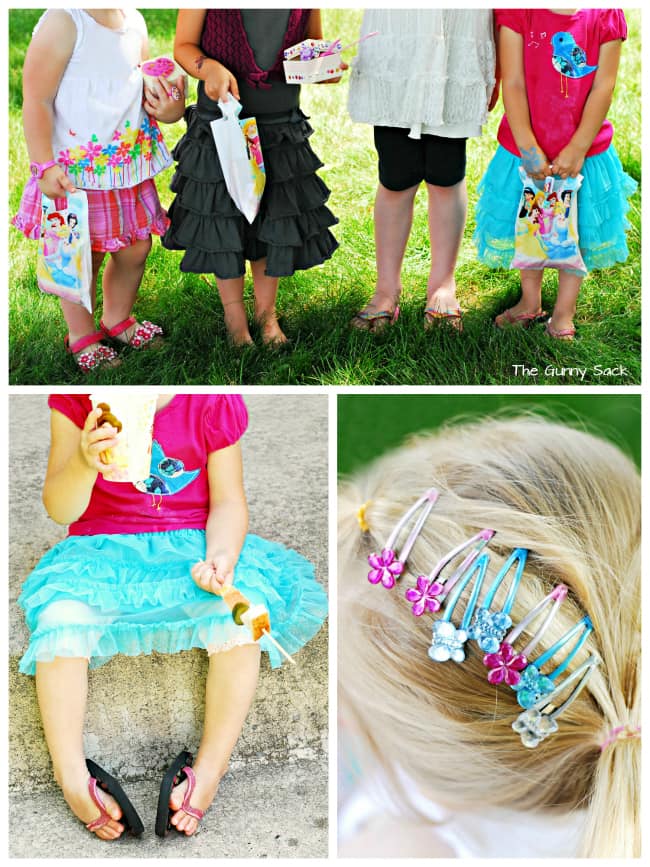 They filled the Disney Princess flavor bags with candy and even more of the party favors. They were quite pleased to have their hands full of treasures! While getting ready for the party, the little girl on the bottom right insisted that all of her pretty “clippers” (meaning hair clips) be put in her hair! Isn’t that adorable?

Inside the house, Vanessa helped the girls decorate a huge princess castle. The castle is a large removable sticker that is also from Hallmark. I found it in the party aisle at Walmart. #DreamParty #cbias 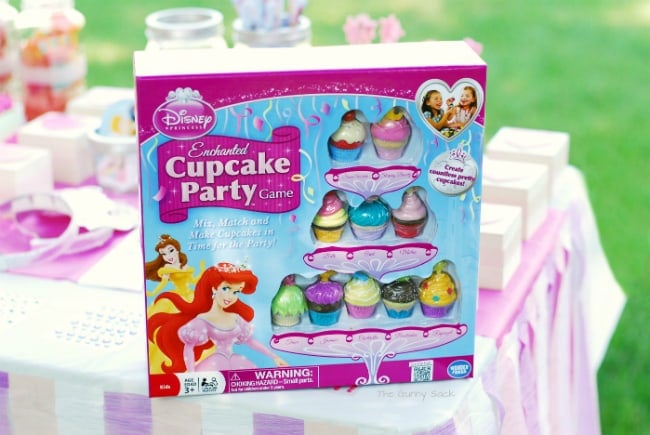 What little girl wouldn’t love this Disney Princess Enchanted Cupcake Party game? It would be a great gift to give but instead of giving it as a gift all of the girls played it. Even the big girls said it was fun. I found the game in the toy department at Walmart. 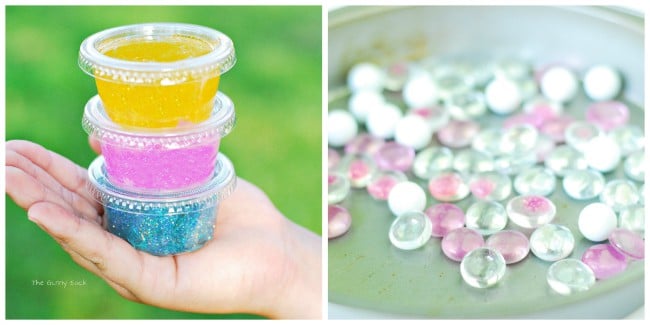 We made Princess Putty and Sparkly Princess Gems. Both of these crafts were more like science experiments and the girls thought they were both really cool. I will try to share how we made both of them in future blog posts. 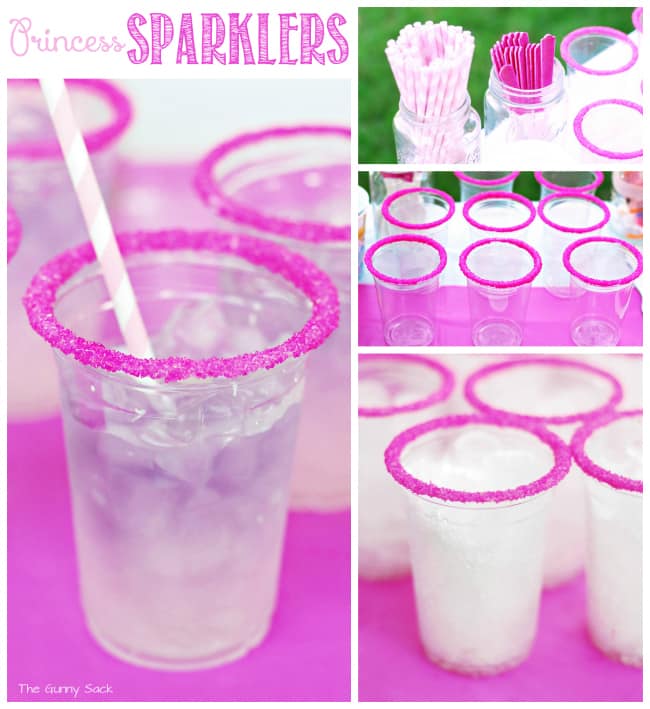 The last thing we did at the party was have dessert.  We had Princess Sparklers to drink. Before the party, I put pink sprinkles around the edges of clear plastic cups. Right before we served the drinks, we filled them with crushed ice and then added the pink, purple and clear layers of liquid. 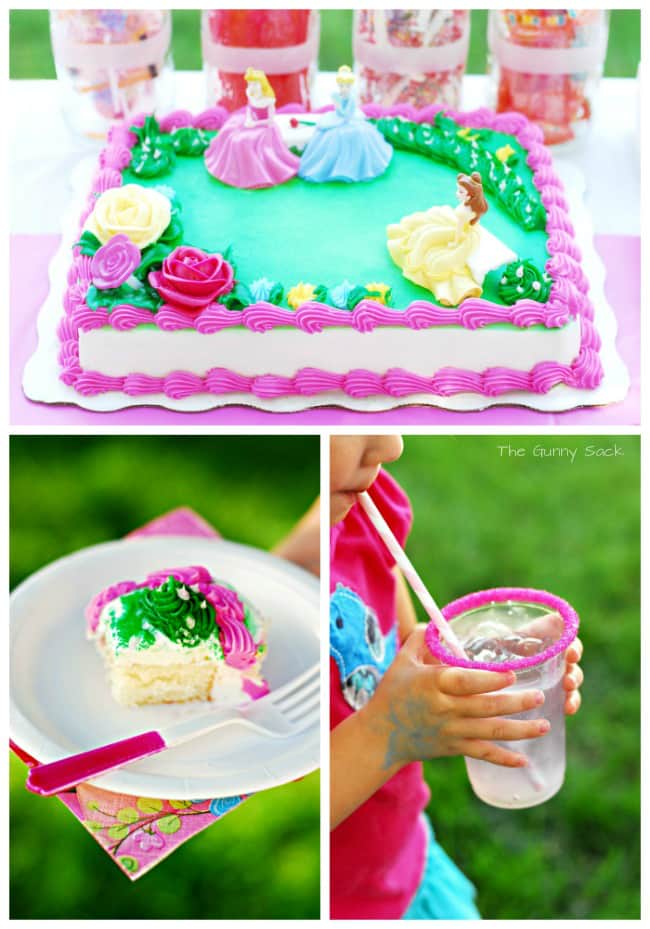 This Disney Princess DecoPac cake was from the Walmart bakery. There were so many kinds of birthday cakes at Walmart. I chose this one from a book they had sitting out on the counter. I placed the order a couple of days before the party and went in to pick it up before the guests came. Isn’t is cute? It is no secret that I love buttercream frosting and have tried it from so many places. The frosting on this cake was delicious and the cake was moist. I was so impressed that I saved a couple of pieces of cake to give to my friend’s mom who is a fellow buttercream frosting lover and she was delighted!

The princess party was a huge success! I really like the convenience of being able to get everything I needed for the party from the party supplies and favors to the cake and toys from Walmart. Things are so busy this summer so not having to run from store to store was a huge plus!