This Pumpkin Cheesecake Mousse recipe is a delicious, creamy dessert that is so fun to serve from mini pumpkins! It’s perfect for Thanksgiving dinner. 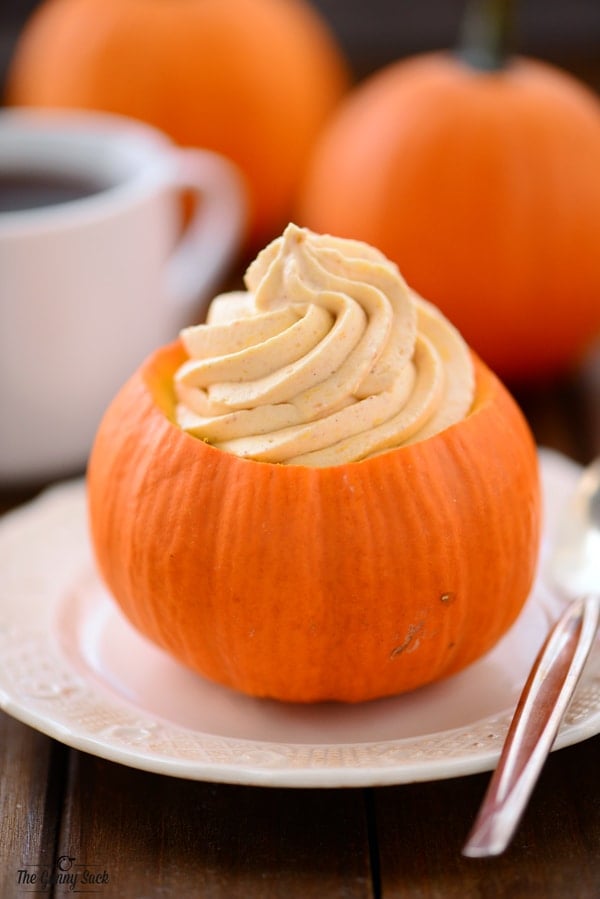 Have I ever mentioned that fall is my favorite season? Actually, I think that is a pretty common here in Minnesota. Contrary to popular belief, our summers are actually quite hot and humid. By the time fall comes around, we are all ready for the cooler temps. Autumn is beautiful in Minnesota with all the changing leaves.

On my way to the grocery store the other morning, the sun was still low in the sky, there was fog in all the low places, the leaves on the trees were yellow and orange, the light was golden and it was beautiful out!

When I got to the grocery store, I found all of the fall produce, outside of the store on display. I spotted some mini pumpkins and thought about how fun they would be to fill with pumpkin cheesecake mousse as a fun, fall dessert. So, today I’m sharing a recipe for Pumpkin Cheesecake Mousse! 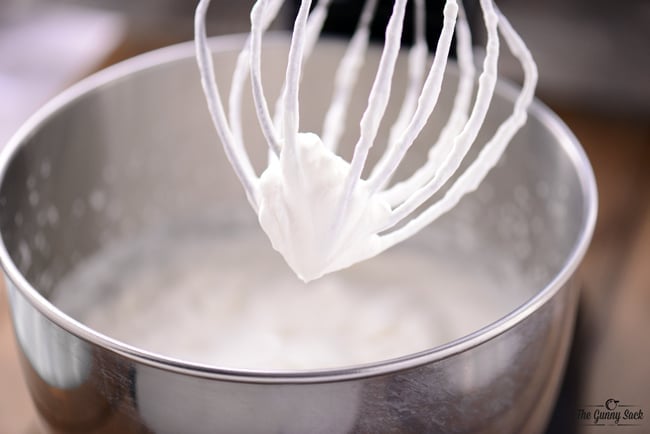 Start by making the whipped cream using the whisk attachment of a stand mixer. I used my KitchenAid Artisan Mixer in Caviar. When making whipped cream, it’s best to start with a bowl and whisk that have been chilled for 15 minutes. Beat the heavy whipping cream until it starts to thicken. Add powdered sugar and vanilla. Beat until soft peaks form. Scoop the mixture into a separate bowl and set aside. 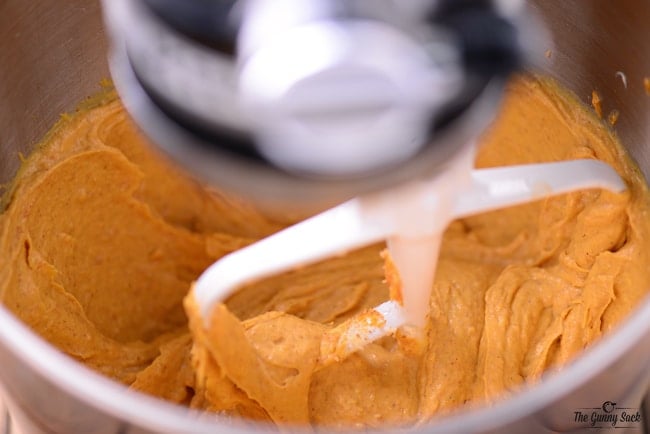 Wash the mixer bowl and then beat the softened cream cheese, using the beater attachment, until light and fluffy. Add the powdered sugar, pumpkin puree, graham cracker crumbs, vanilla and pumpkin pie spice; beat until smooth, scraping the bowl at least once. Fold the whipped cream into the pumpkin cheesecake mixture. 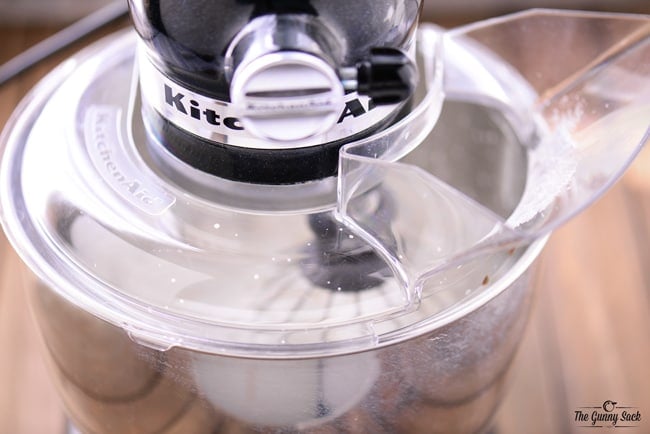 One of the things I love about my KitchenAid mixer is the splashguard that they call a “one piece pouring shield”! It fits on top of the bowl and has an opening for pouring ingredients into the bowl. You can see the white spots of heavy cream on the middle part on the splashguard, powdered sugar on the opening and dots of vanilla underneath the opening. 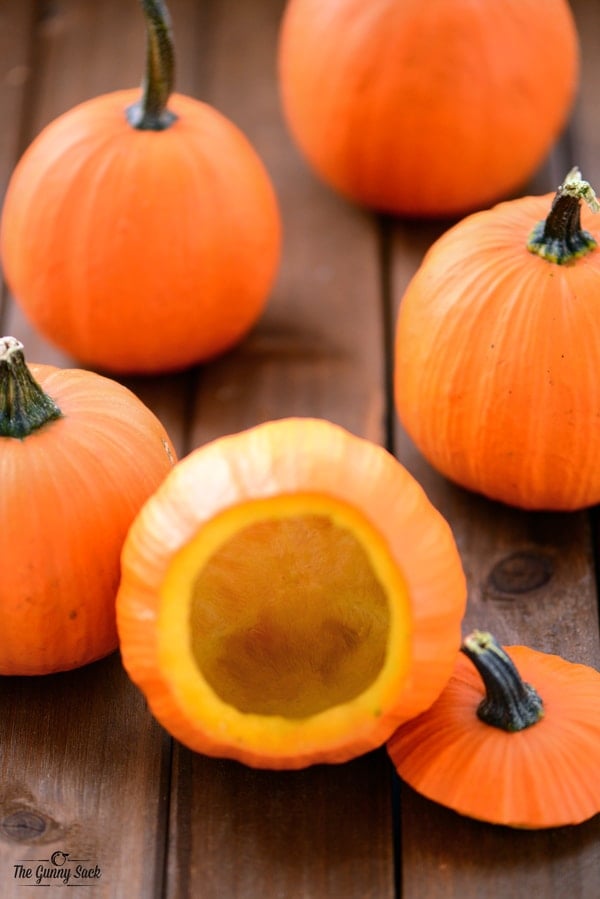 Cut the tops off of your mini pumpkins. Scoop of the flesh, pulp and seeds. 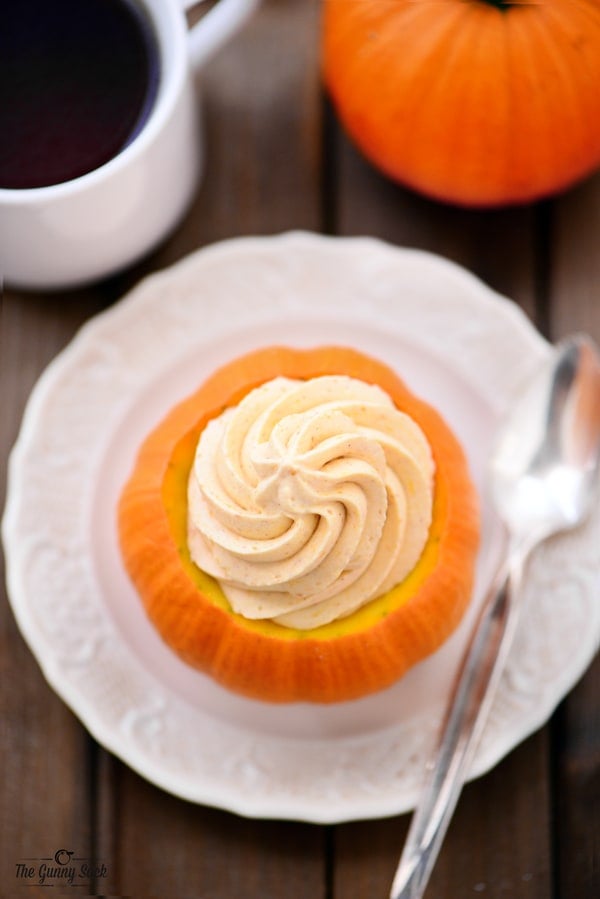 Keep the mousse refrigerated and before serving, fill the prepared mini pumpkins (or small bowls) with the pumpkin cheesecake mousse. I used a Wilton 16-in Decorating Bag with an Ateco Open Star Tip to pipe the mousse into the pumpkins.

My pumpkins were about three inches tall and three inches wide and I was able to fill them with half a cup of mousse. This Pumpkin Cheesecake Mousse is a delicious, creamy dessert that is so fun to serve from mini pumpkins! Wouldn’t these look cute on your table for Thanksgiving dinner? 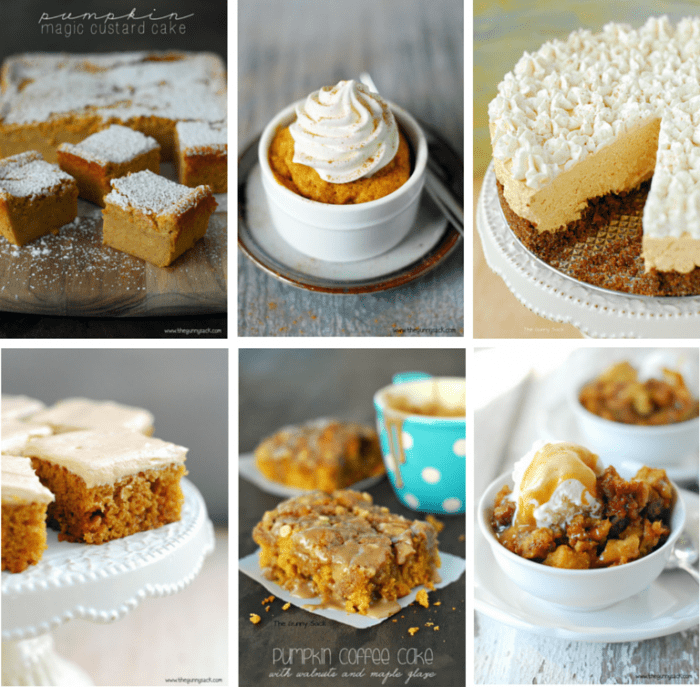