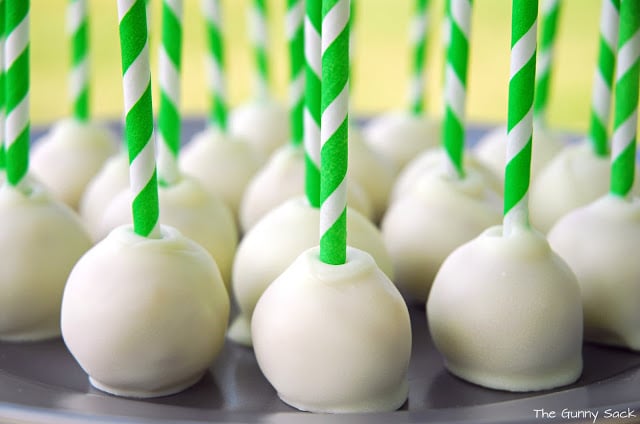 My sister is getting married on Saturday and I am making some cake pops for the wedding. I wanted to do a trial run before making the wedding cake pops. The ones for the wedding will have gray and white paper straws with a light green shell on the cake pop. Even though it seems like everyone out there already knows how to make cake pops and cake balls, I’ve had a hard time getting the cake pops to look good so I thought I would share how I did it. 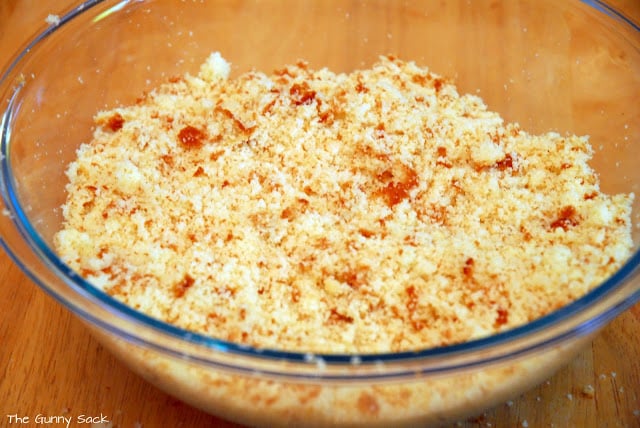 I baked a white cake in a 9×13 inch pan and allowed it to cool completely. Then, I crumbled the entire cake into a large mixing bowl. 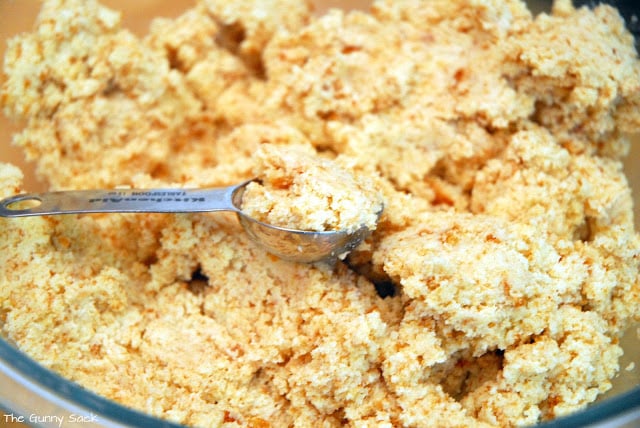 I mixed in 3/4 of a container of store bought vanilla frosting. Then, using a metal tablespoon I scooped the mixture pressing it firmly against the side of the bowl and slid it out of the spoon with my thumb. 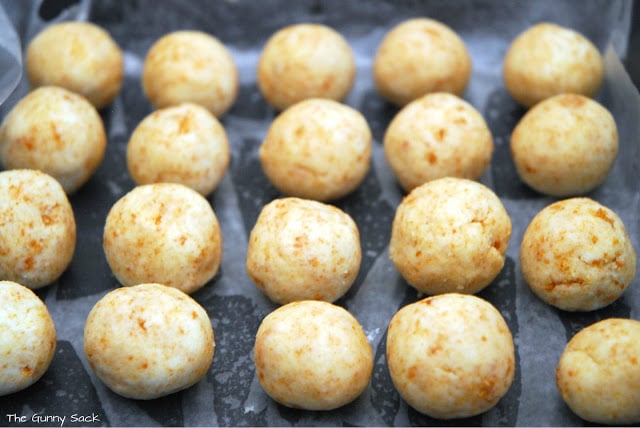 I rolled the balls between the palms of my hands making sure to press the mixture firmly together. Every so often I had to wash my hands before continuing to make more balls. I put the cake balls on a wax paper covered pan and placed them in the refrigerator for a couple of hours. 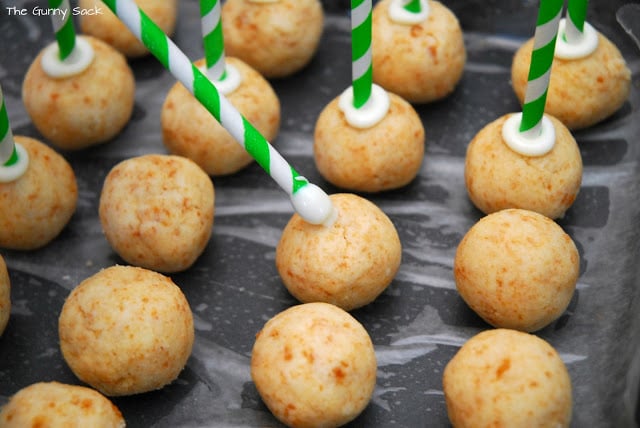 Before starting to insert the paper straws, I cut them in half so they wouldn’t be so long. Then, I melted 1/4 cup of white chocolate chips in the microwave. I dipped the end of a paper straw in the melted chocolate and inserted it into the cake ball. Next, I place the cake balls in the freezer for 10 minutes to let the chocolate harden. 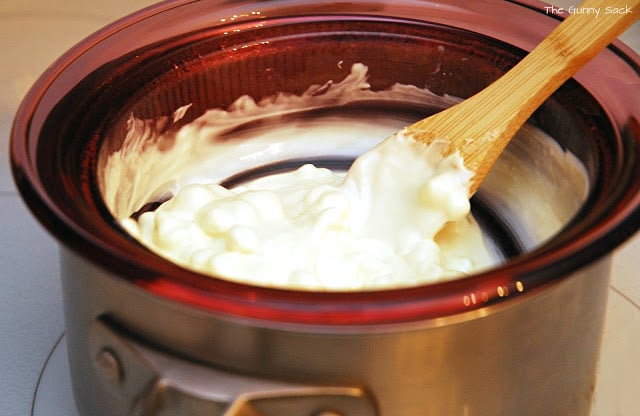 While the cake balls were in the freezer, I melted 2 cups of white chocolate chips with 2 tablespoons of shortening in a double boiler. Here is my fancy schmancy double boiler…a glass bowl over a pot of simmering water. No, there isn’t 2 cups of white chocolate chips in the bowl. I took this picture while dipping strawberries but wanted to show how I do it. When using this method, be sure that the water is simmering, not boiling and that it does not touch the bottom of the bowl. Once the white chocolate melted, I removed the bowl from the pot but I left the water simmering so that I could remelt the chocolate as needed. 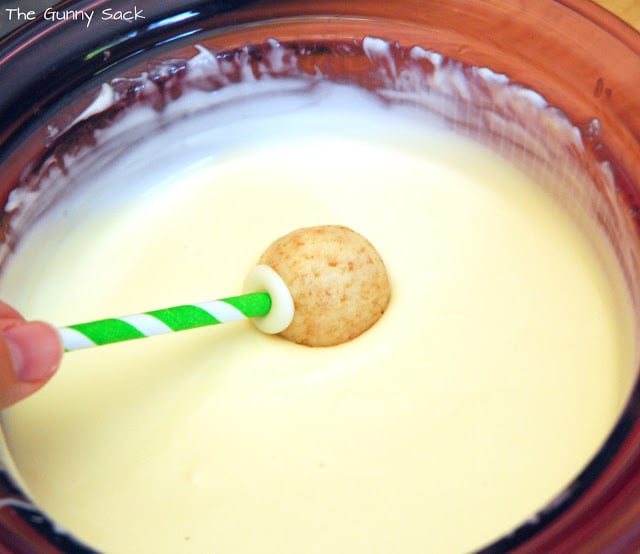 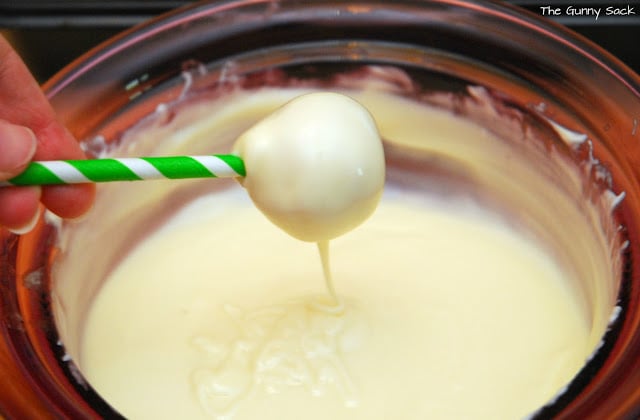 Still holding the cake pop horizontally, I allowed the excess white chocolate to drizzle off the cake pop. To speed it up a bit I used a gentle side-to-side shaking motion. I also tried gently tapping the arm that was holding cake pop with the hand from my other arm. 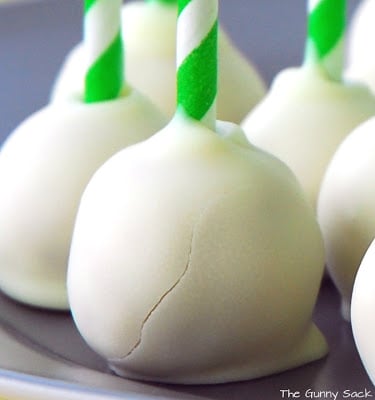 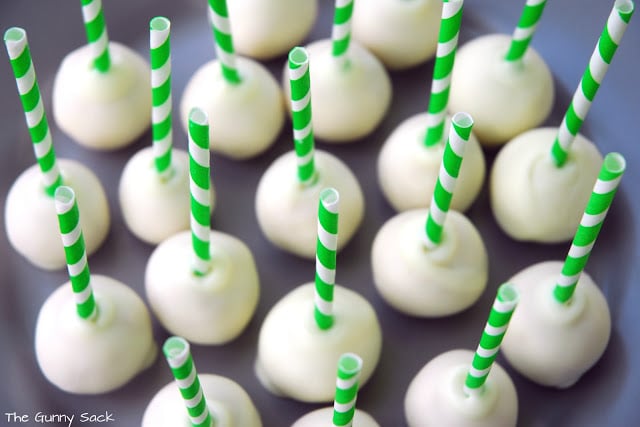 I am pleased with how they turned out and hope the ones I make for the wedding turn out as well as these ones did. I will be using candy melts and don’t have a lot of experience with them. If I end up having issues, I will make them with white chocolate and drizzle the candy melts on top.

Have you had success making cake pops or cake balls?