This homemade Whipped Cream Recipe is light and airy while still holding its shape. Includes tips and tricks as well as how to make flavored whipped cream! 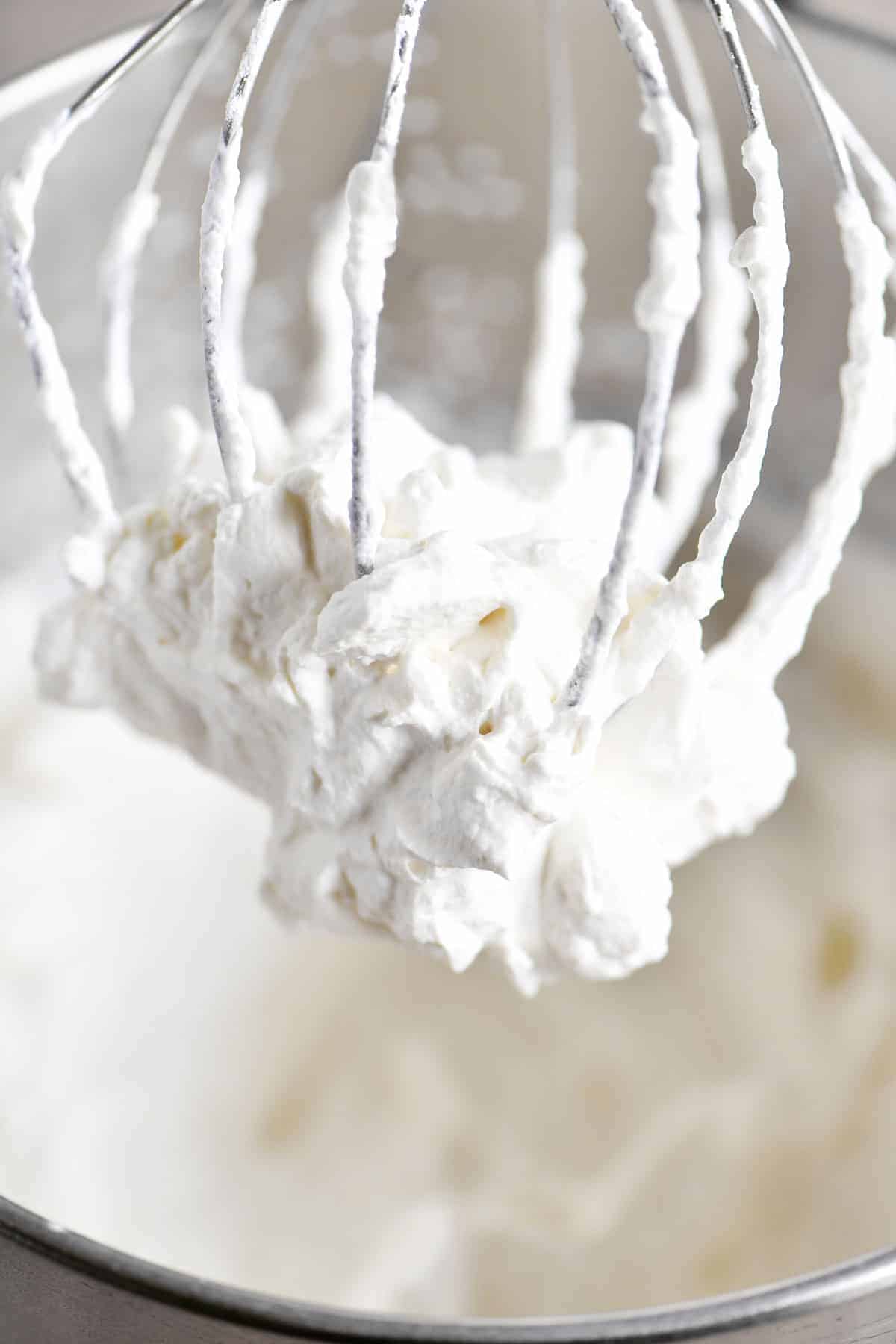 I love homemade whipped cream so much that I prefer it over ice cream! It is the perfect topping for my pumpkin pie bars and is a must on top of hot chocolate. Once you make your own whipped cream you’ll never go back to using store-bought whipped topping (aka cool whip).

Where is the whipped cream recipe? In this post, I will share step-by-step photos for how to make the recipe, as well as answer FAQs about the recipe and share a short video showing the recipe in motion. But you can go directly to the recipe by scrolling down to the bottom of the post. 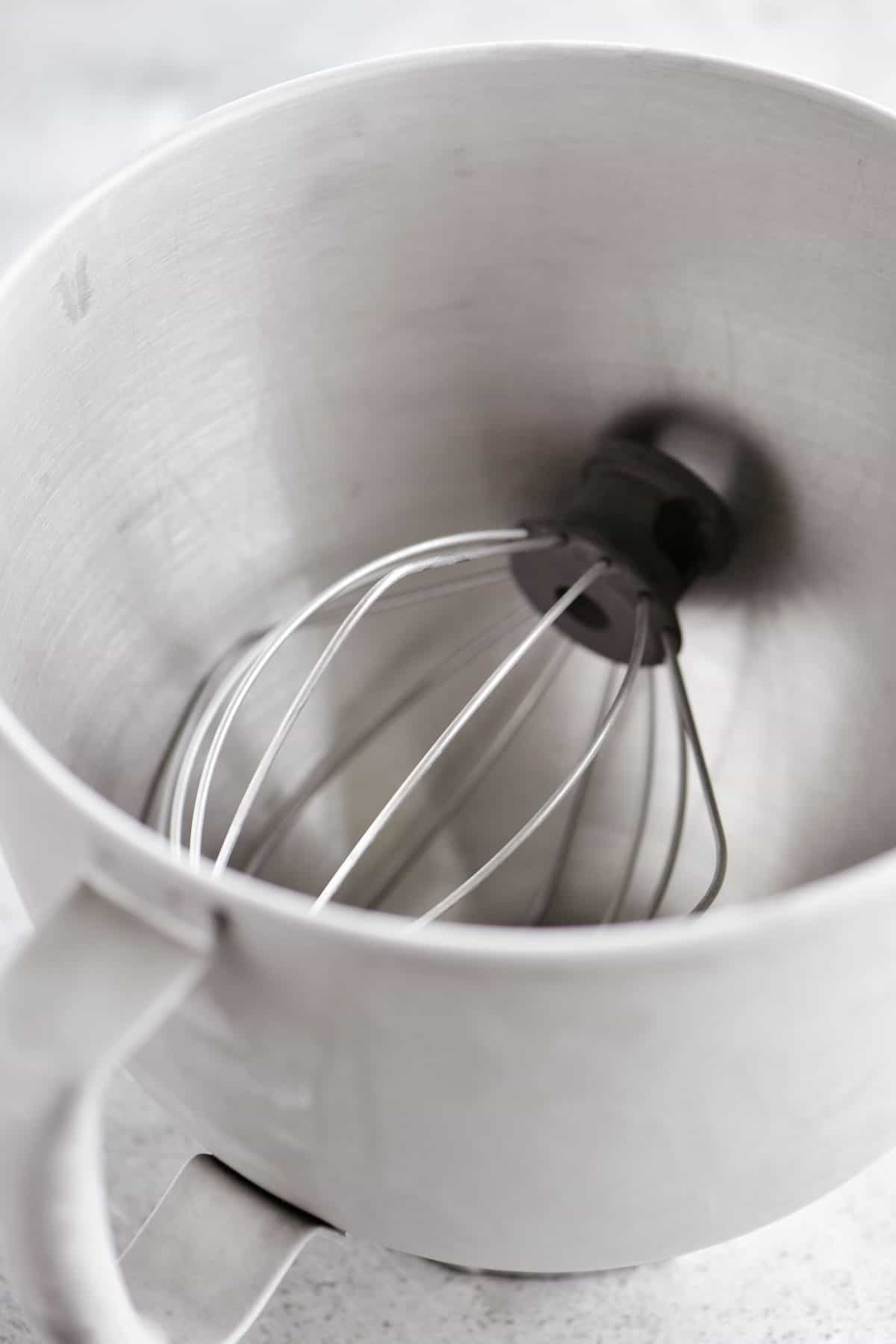 Why start with a chilled bowl?

I recommend making whipped cream in a chilled metal bowl using the chilled whisk attachment. Since cream whips best when cold, the chilled bowl will give you the best results by making the most volume from the cream.

To chill the bowl and whisk, simply place them in the freezer for about 15 minutes before starting.

Should I add all of the ingredients right away? 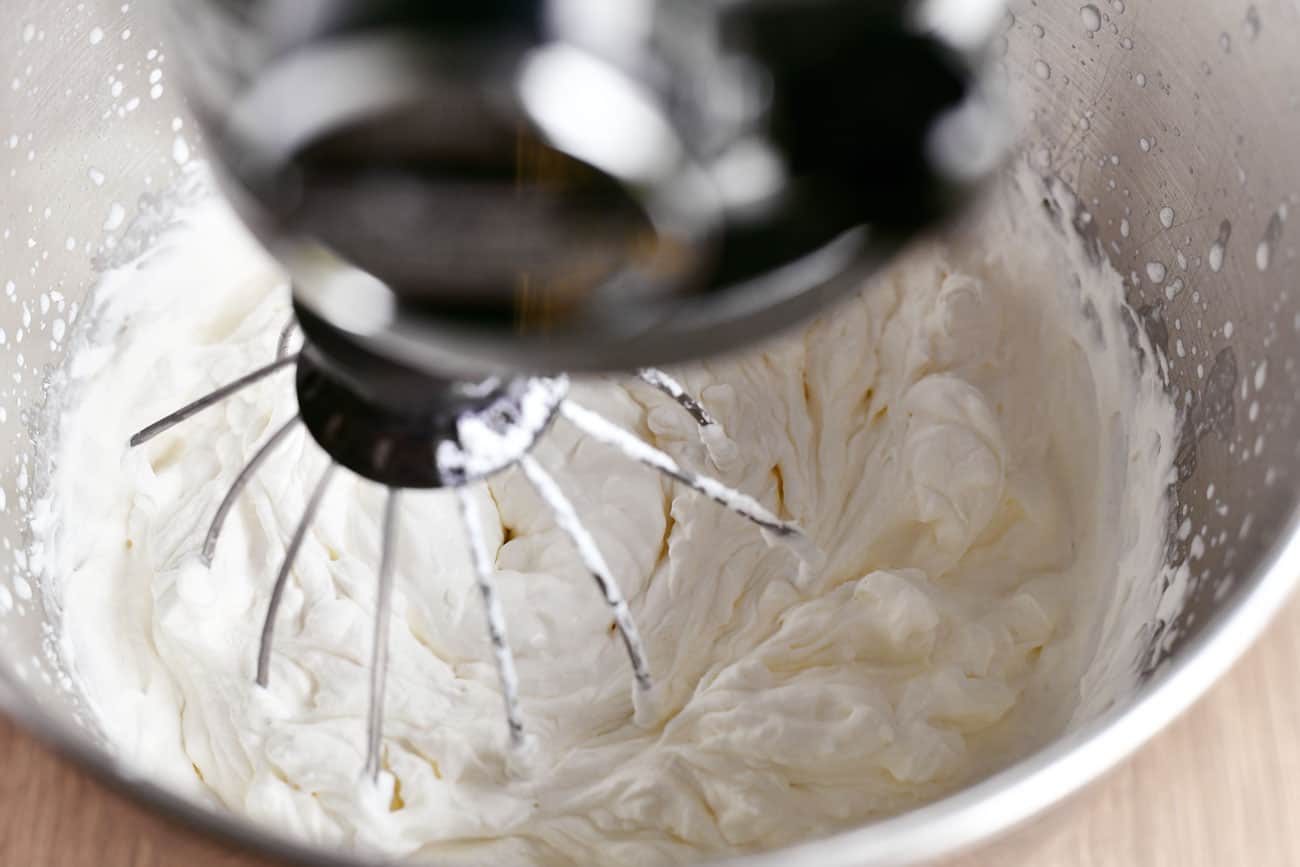 What does it mean to form stiff peaks?

You’ll know that your whipped cream is ready when it forms stiff peaks. What that means is when you lift the whisk attachment up out of the whipped cream a peak will form and hold its shape.

If you prefer to have whipped cream with soft peaks, stop beating it a little sooner. 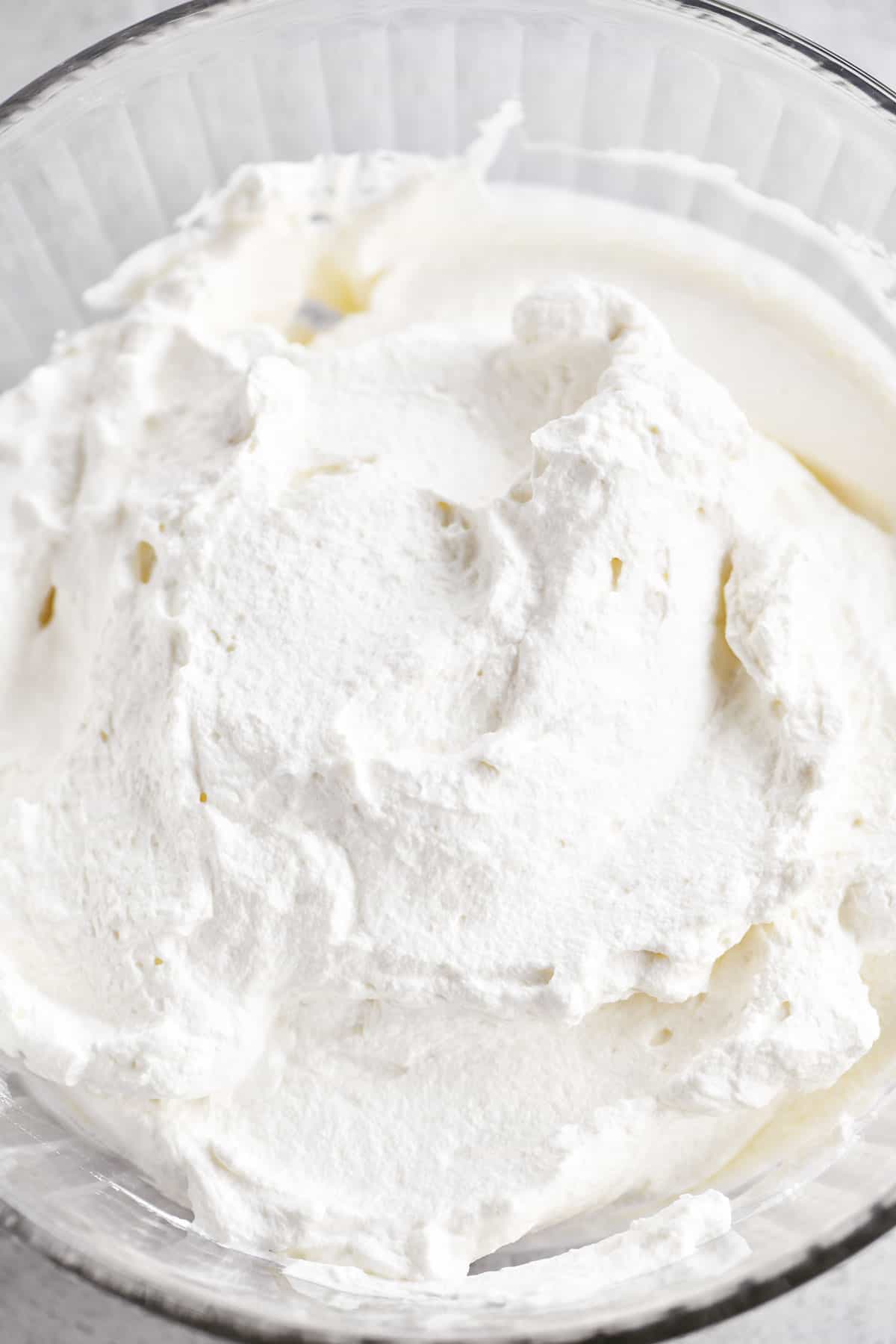 What is the difference between heavy whipping cream, heavy cream, and half-n-half?

The difference between the different kinds of cream is the milkfat in them. To get the best whipped cream that holds up well you’ll want to choose the one with the most milkfat. Using a cream with less fat will give you an airy texture that will flatten and liquefy over time.

Heavy cream, also known as heavy whipping cream, is cream that has 36% milkfat. This is the one you want to use for this recipe.

Can I make whipped cream with half-n-half?

No, it doesn’t have a high enough ratio of fat to be able to whip and hold its form. Half-n-half is a mixture of milk and cream that contains 10.5% – 18% milkfat. If you get it really cold, almost frozen, you may be able to whisk it until it is airy but it won’t hold its shape liked whipped cream. 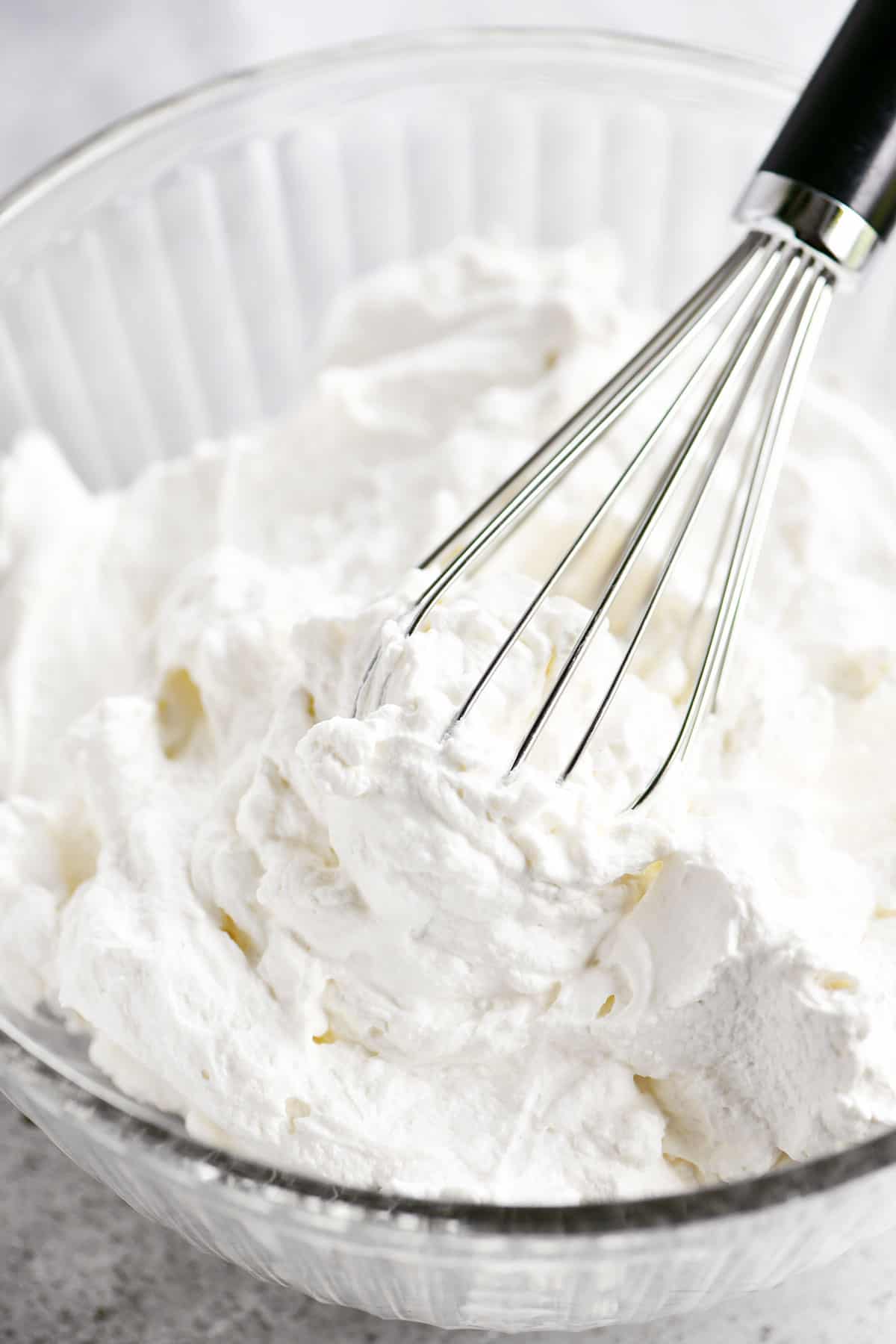 Can I make whipped cream with a whisk?

Yes, you’ll just need a little muscle to get it whipped. Start with a chilled bowl and whisk. Then vigorously whisk by hand instead of using a hand mixer or stand mixer following the recipe below. 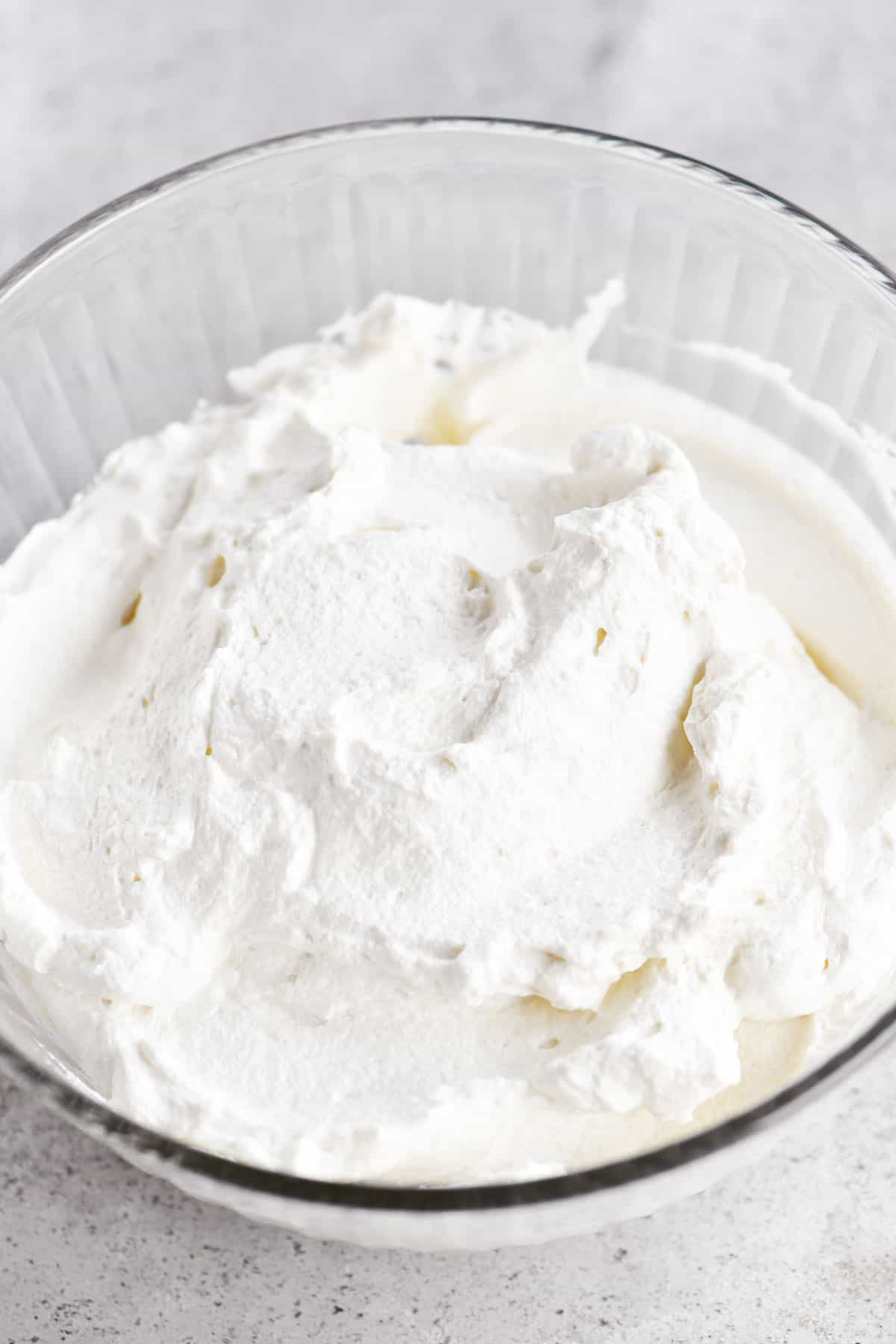 How can I make other flavors of whipped cream?

You can make other flavors of whipped cream by adding different extracts or flavorings in place of the vanilla in the recipe. Try making almond flavor or peppermint.

Another option is to add additional ingredients, along with the powdered sugar and vanilla, to make other flavors. 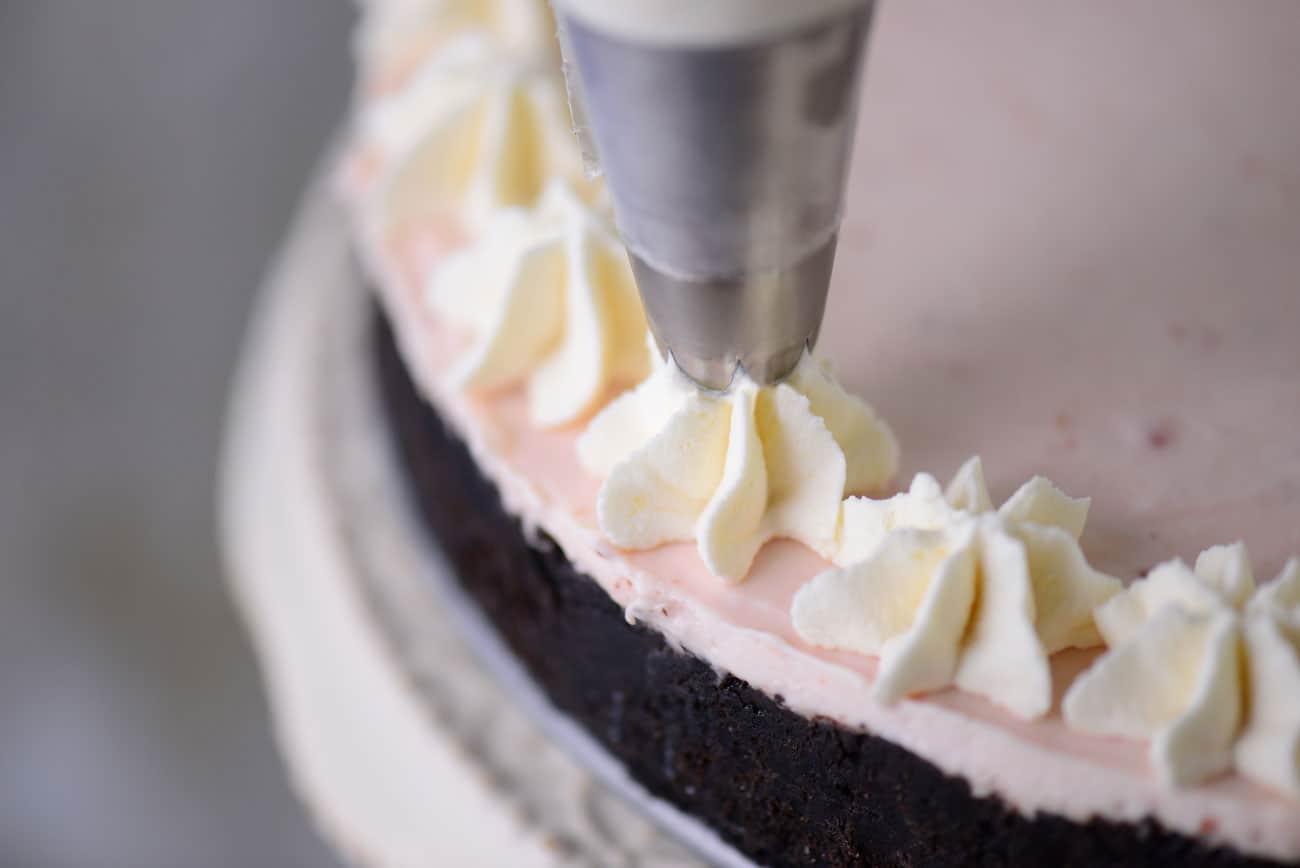 If you want your whipped cream to hold up even better you can add gelatin to make stabilized whipped cream. Sprinkle 2 teaspoons of unflavored gelatin over 2 tablespoons of cold water. Allow the gelatin to soften and thicken for 5-10 minutes.

Then, heat in the microwave in 5-second intervals until dissolved. Slowly add to the whipped cream after the powdered sugar and vanilla, while the mixer is on low. Beat until stiff peaks form.

How To Freeze Whipped Cream

If you have leftover whipped cream, you can freeze it for later. Put the whipped cream in an airtight container and store it in the freezer for up to two months. Thaw in the refrigerator. 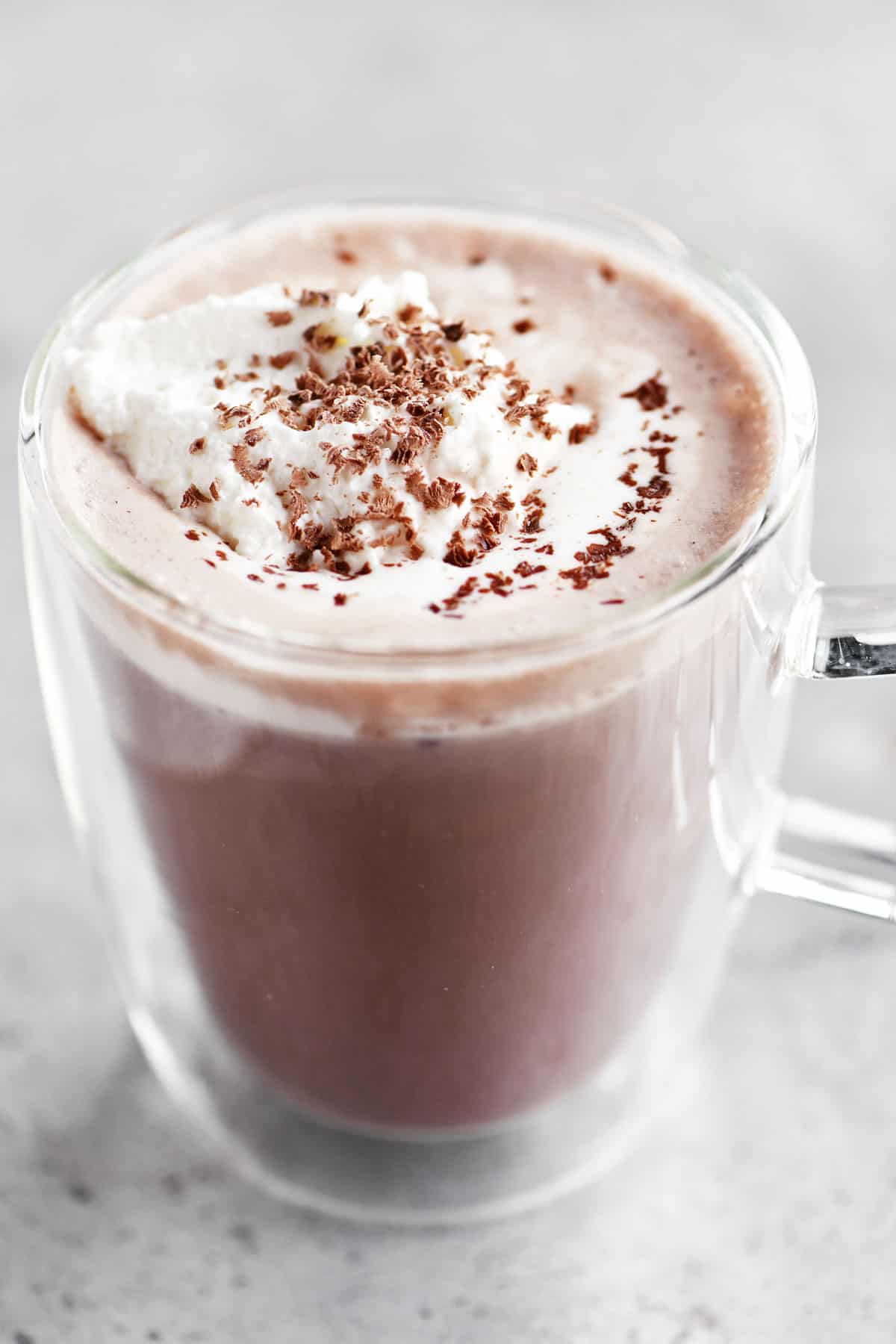 Ways To Use This Whipped Cream Recipe

This Pumpkin Bars recipe is the ultimate autumn dessert for sharing. It is easy to make and tastes even BETTER than pumpkin pie!

This Blueberry Cheesecake Dessert recipe is my husband’s childhood favorite with a light, moist cheesecake topped with blueberry pie filling and whipped cream.

Top Banana Pancakes with whipped cream and it’s like having dessert for breakfast. Banana pancakes are easy enough to make on a weekday morning and delicious enough to serve for brunch.

Slow Cooker Apple Cider topped with whipped cream, caramel sauce, and cinnamon syrup is perfect for fall and winter. Serve it at Halloween, Thanksgiving, and Christmas.

To make additional flavors, add the following along with the powdered sugar and vanilla.