Bacon Stuffed Cinnamon Waffle Sticks are an easy to make breakfast or brunch recipe that kids will love! They can be eaten plain or dipped in Nutella, maple syrup or even peanut butter. 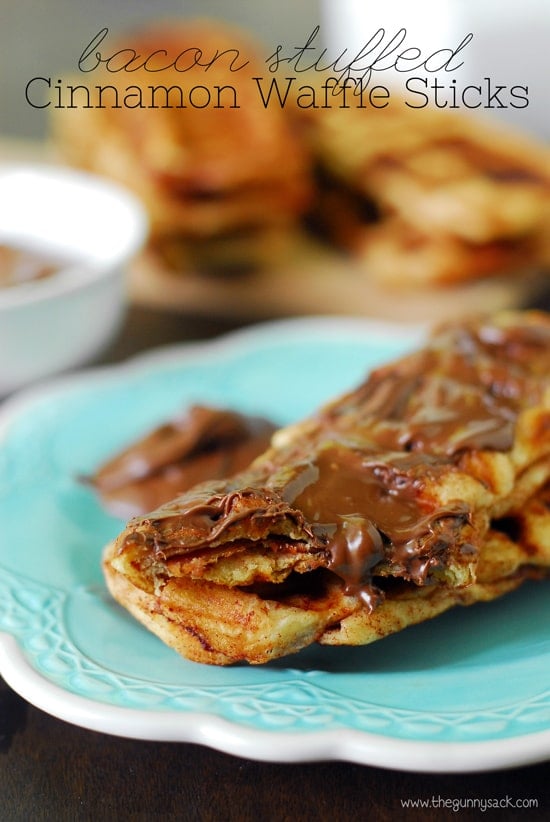 One of my earliest memories of getting hurt was when I touched a hot waffle iron. My mom was making waffles and I climbed up on my baby sister’s high chair to watch. I think I was about 5 years old. The waffle iron was stainless steel and had a red light on the top. While my mom was mixing up the batter and the waffle iron was heating up, I was wondering what the red light meant. I wasn’t sure if it meant that the waffle iron was still heating or if it meant that it was hot. So, I decided to touch it to find out…it was hot! And it hurt my finger. Luckily it was a minor injury, but I learned an important lesson that day about not touching things to see if they are hot!

We have a waffle iron, but I always forget we have it. When my kids want waffles we usually make the frozen, toaster waffles. My kids really like the Cinnamon Waffle Pops that I made so I decided to make some cinnamon waffle sticks. But then, I came across some delicious looking Pancake Dippers by Sheryl from The Lady Behind The Curtain. I got to meet Sheryl and her husband (whom they jokingly refer to as The Guy Behind The Curtain) at the Pillsbury Test Kitchens last winter. They were both super friendly and we had fun chatting about blogging, Minnesota weather and kids! Anyway, I had to try stuffing my cinnamon waffle sticks with bacon and we love how they turned out. 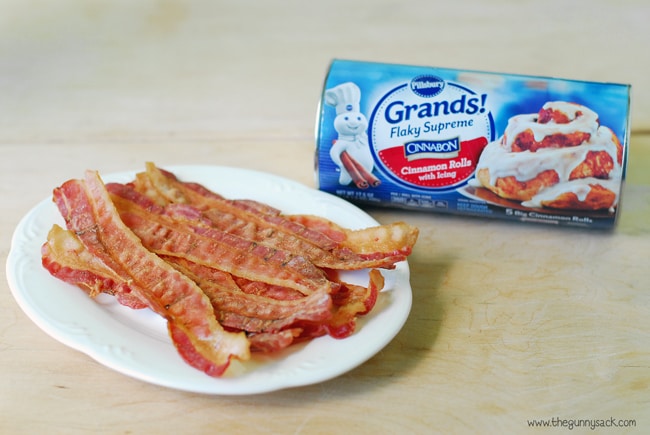 Start with some cooked bacon and Pillsbury Grands Flaky Supreme Cinnamon Rolls. It has to be the flaky cinnamon rolls because they can be unrolled. 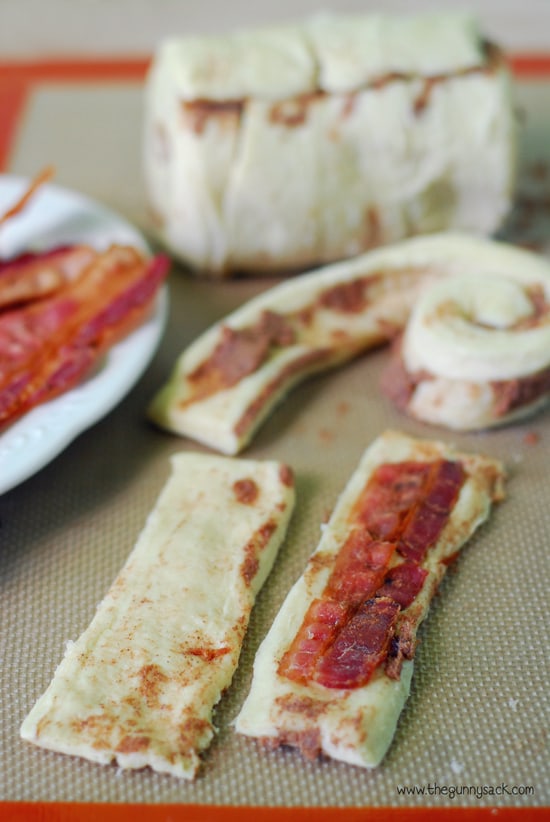 Take a cinnamon roll out of the package and unroll it. Cut it into four equal pieces. Lay a strip of bacon in the center of one piece, flattening it if necessary, so that there is a little border of dough around the edges. 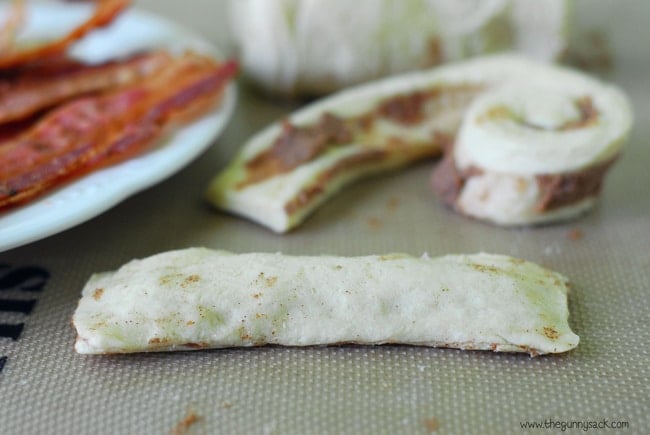 Top with another strip of cinnamon roll dough. Pinch all of the edges together. 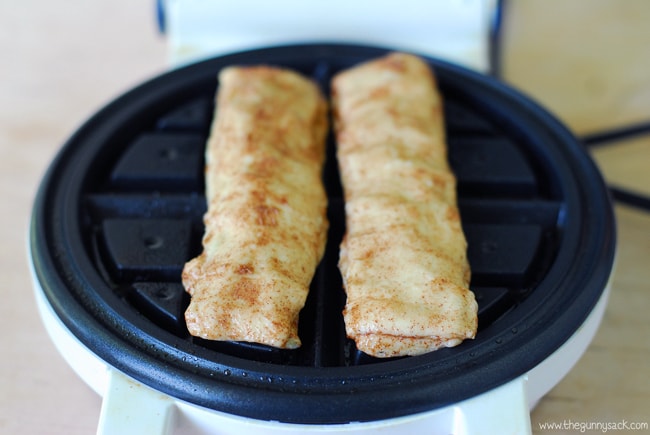 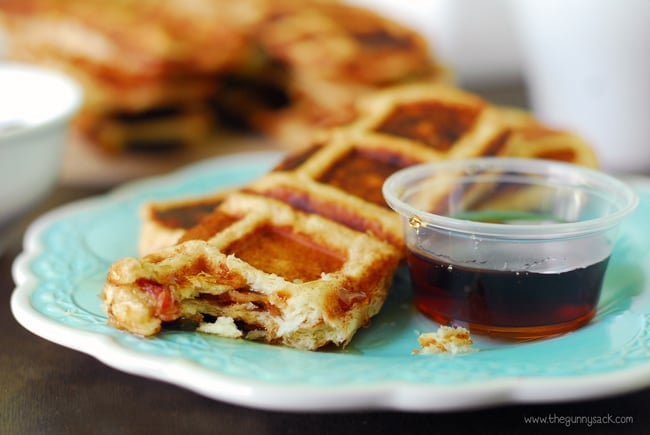 We loved the combination of flavors: sweet cinnamon rolls and salty bacon. We dipped them in maple syrup. 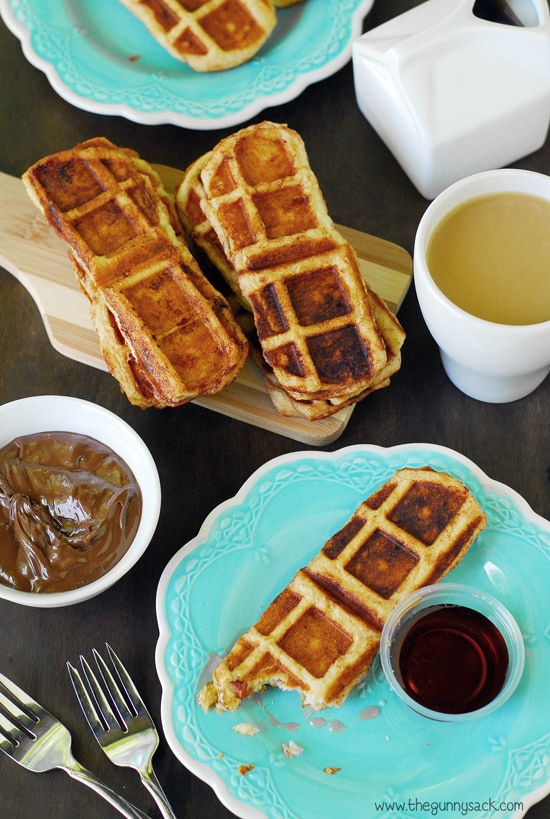