These patriotic Fourth Of July Cupcakes are layered cupcakes filled with buttercream frosting and topped with washi tape flags. 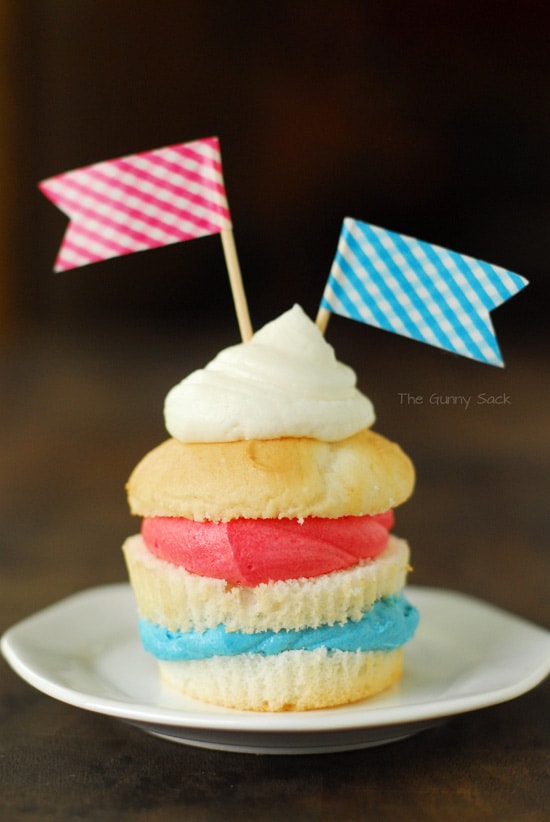 Monday is Memorial Day already and before we know it Independence Day will be here. These Fourth of July Cupcakes can be made for either of those occasions and any time throughout the summer. Like I’ve mentioned, when it comes to cakes and cupcakes, I am really all about the frosting!

I think that there are lots of you who agree with me and that your favorite part of a cupcake is the frosting. If there is a sheet cake being served, I always angle for a corner piece or at least an edge piece. My cousin is the opposite.

I’ve seen her take a cupcake and scrape the frosting off before slowly nibbling her way through some of the cake part! I really should take lessons from her but instead, I chose to make layered cupcakes so that I can maximize the amount of frosting in the cupcake! 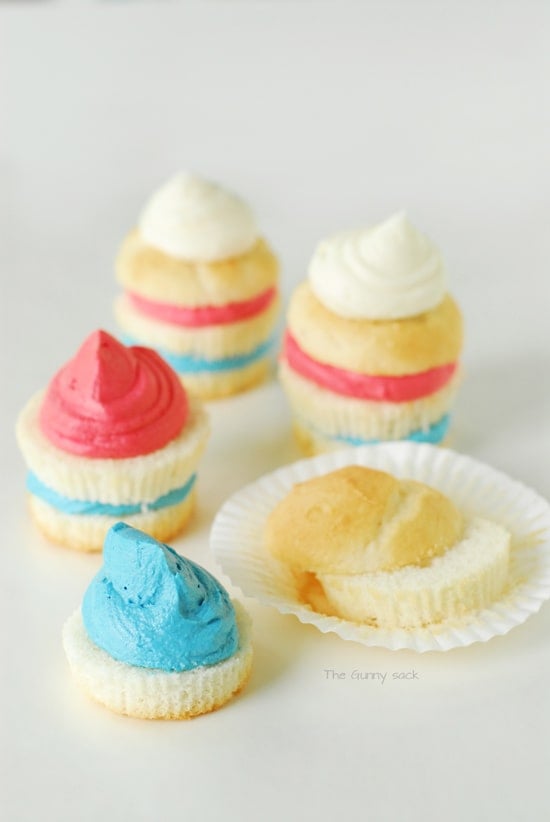 Start with a white cake mix and made cupcakes according to the directions on the box. I baked it for the longer end of the baking time that was listed to make them on the drier side.

While they were baking I mixed up the buttercream frosting using butter, shortening, powdered sugar, heavy cream, vanilla and marshmallow cream. Divide the frosting into three parts. Tint one of them blue, one of the red. and leave the third one white. 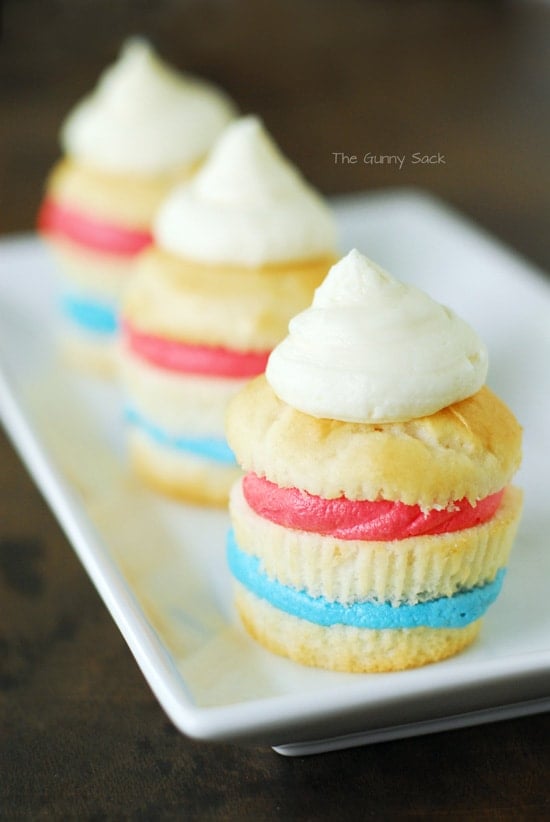 To achieve the dollop look, I cut the end off of a pastry bag so that there was a fairly large opening. Place the opening of the pastry bag right above the cupcake holding it straight up.

Next, squeeze out the frosting keeping the pastry bag in the same position so that the frosting was forced to spread outward. Keep squeezing until it had spread out far enough before lifting the bag. 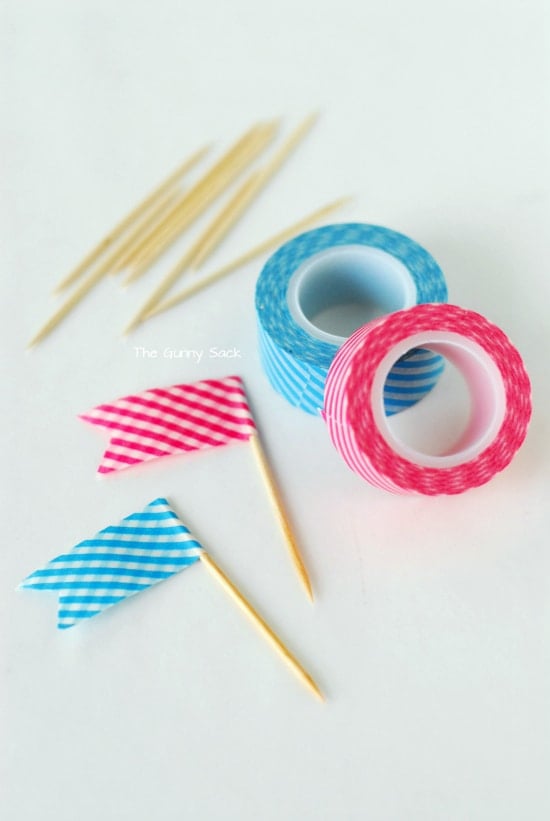 The washi tape flags were so easy to make. I took strips of striped washi tape and folded them over toothpicks. Then, I cut a small “v” into the ends. 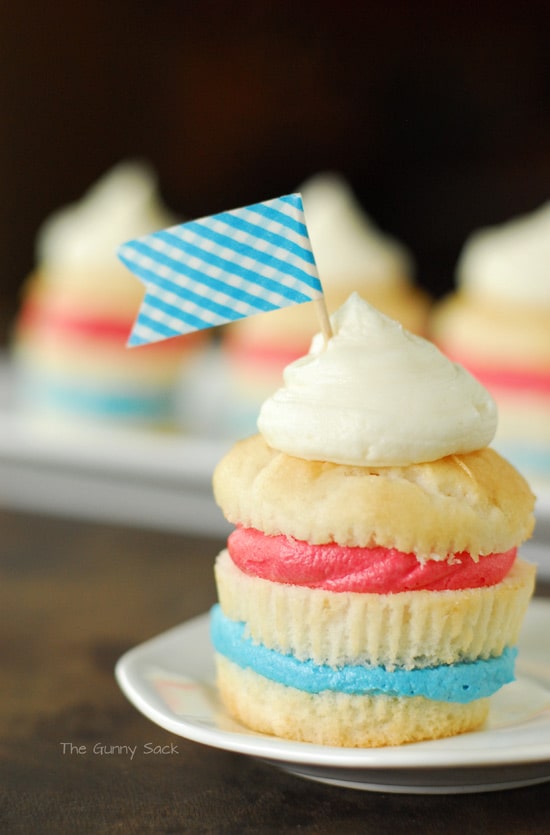 Wouldn’t these layered cupcakes be fun to make with different flavors of frosting on each layer? I’m going to have to try that soon! 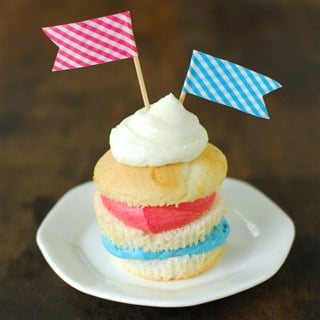 More patriotic recipes for Memorial Day and the Fourth of July: 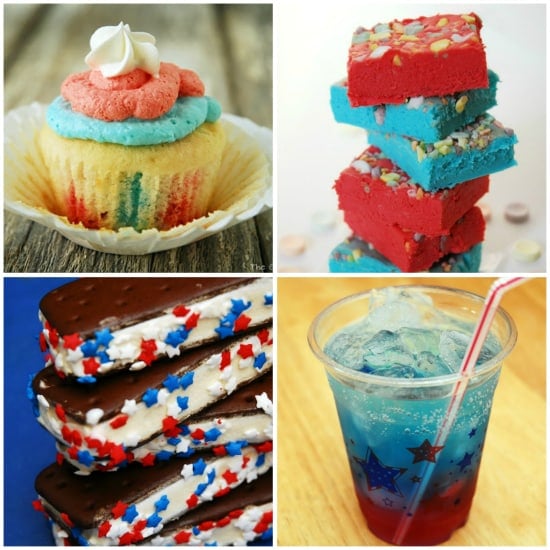