Home » Recipes » Fruit » How To Pick A Watermelon

Choosing the best watermelon is easy if you remember the 5 S’s for How To Pick A Watermelon: Spot, Stem, Sound, Scale, and Skin. 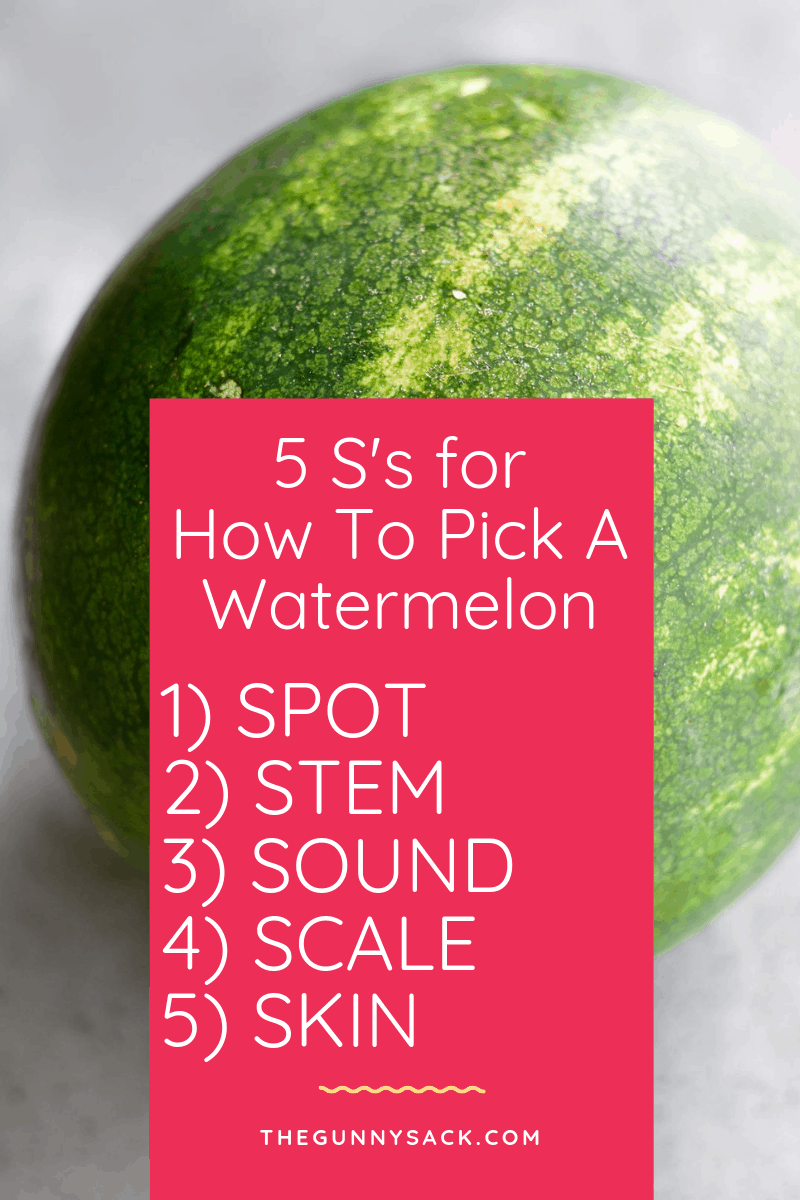 It can be a little daunting to look at the mounds of watermelon in multiple bins when you don’t know which one to bring home with you. There are often several people standing around looking confused about the choices.

So, I came up with an easy way to remember what to look for when choosing a watermelon so that you can quickly pick a delicious one and be on your way!

5 S’s for How To Pick A Watermelon

Disclaimer: This post contains links to products. If you use those links, I may earn a commission. Learn more here. 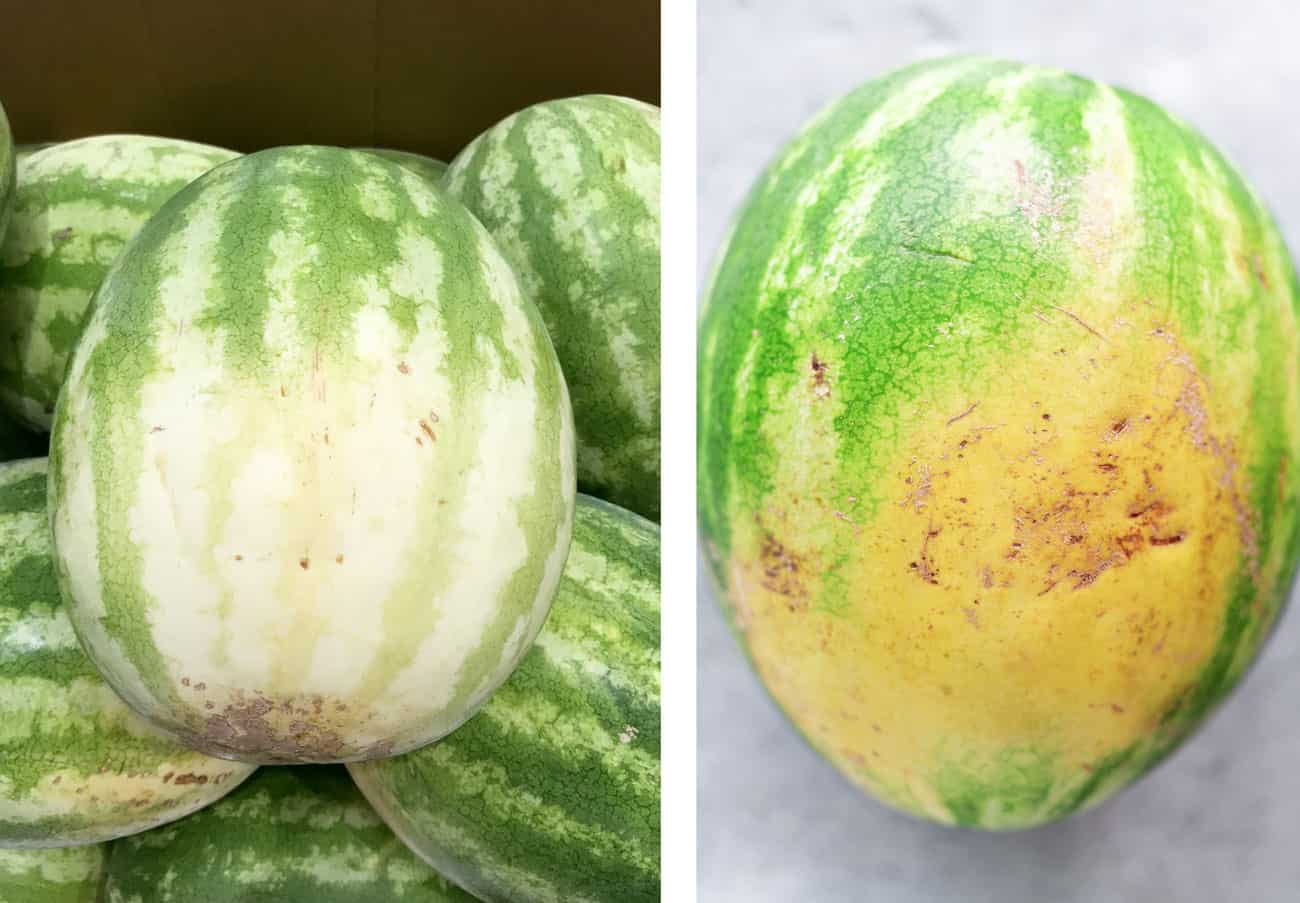 The watermelon spot is the place where the watermelon sat and ripened on the ground under the sun in the field. Look for a watermelon with a creamy yellow spot. 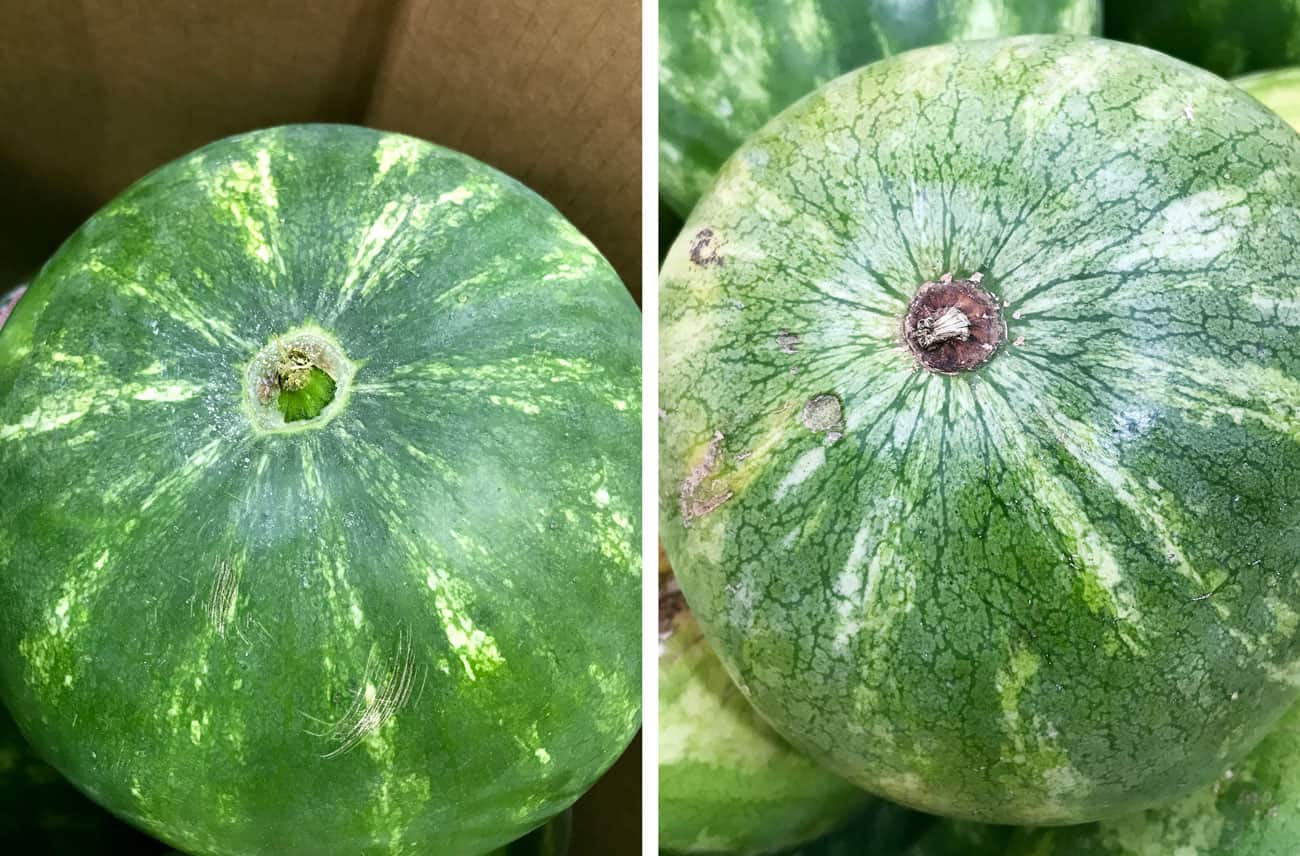 The second S in how to pick a watermelon is for STEM. Check the watermelon stem to see if it was allowed to ripen long enough. A green stem like the one on the left means that the watermelon was picked too early.

Look for a brown watermelon stem like the photo on the right. 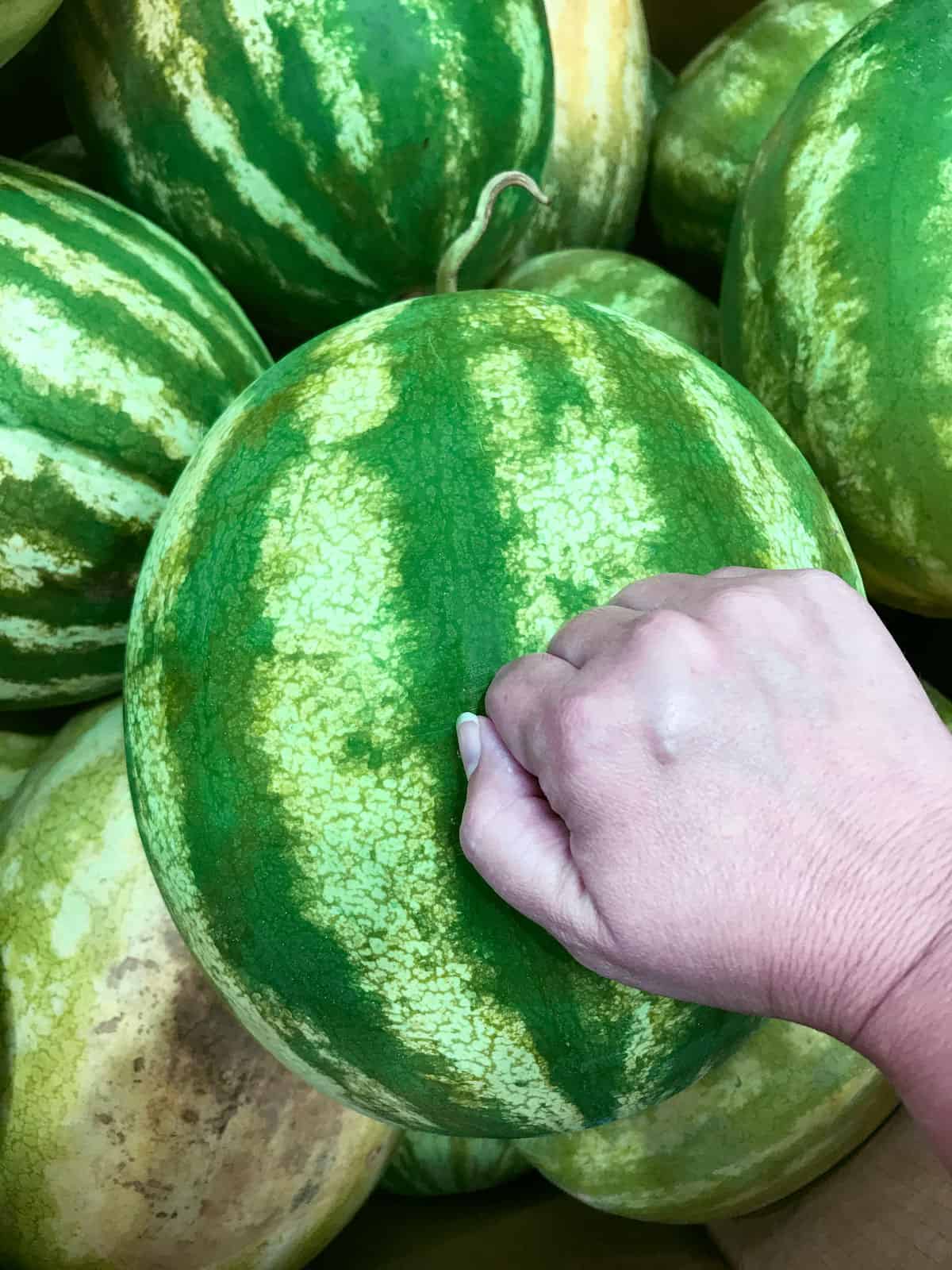 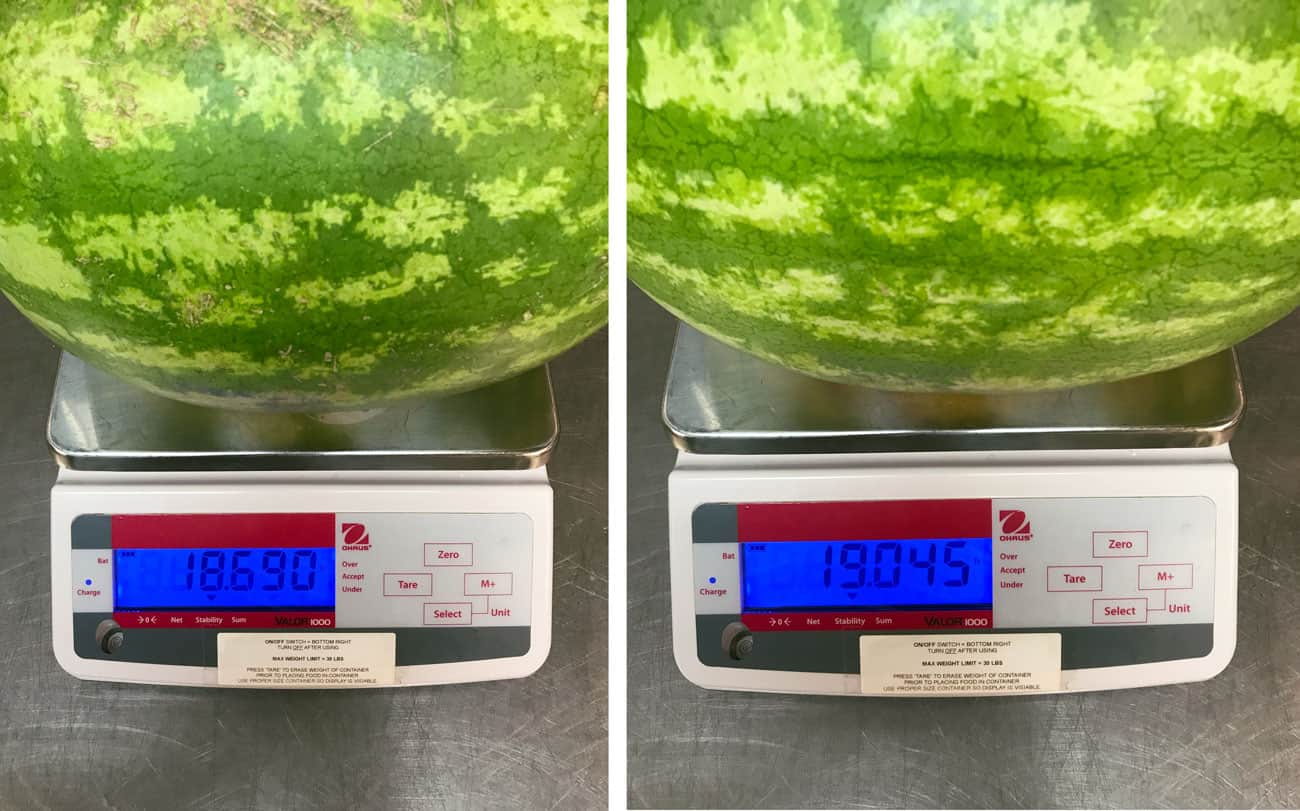 For the juiciest watermelon, you’ll want to choose one that is heavy for its size. Find two watermelons that are similar in size and compare the two. The heavier one has more liquid inside.

Many people get confused by this one because of course, a larger watermelon will weight more than a smaller one. But the key is to compare ones that are about the same size.

You DO NOT have to actually go an weigh your watermelons on a scale but to test this theory, it did! After measuring the length and circumference of two watermelons to make sure there were almost exactly the same size, I weight the two melons and as you can see one if heavier. That is the one with more liquid. 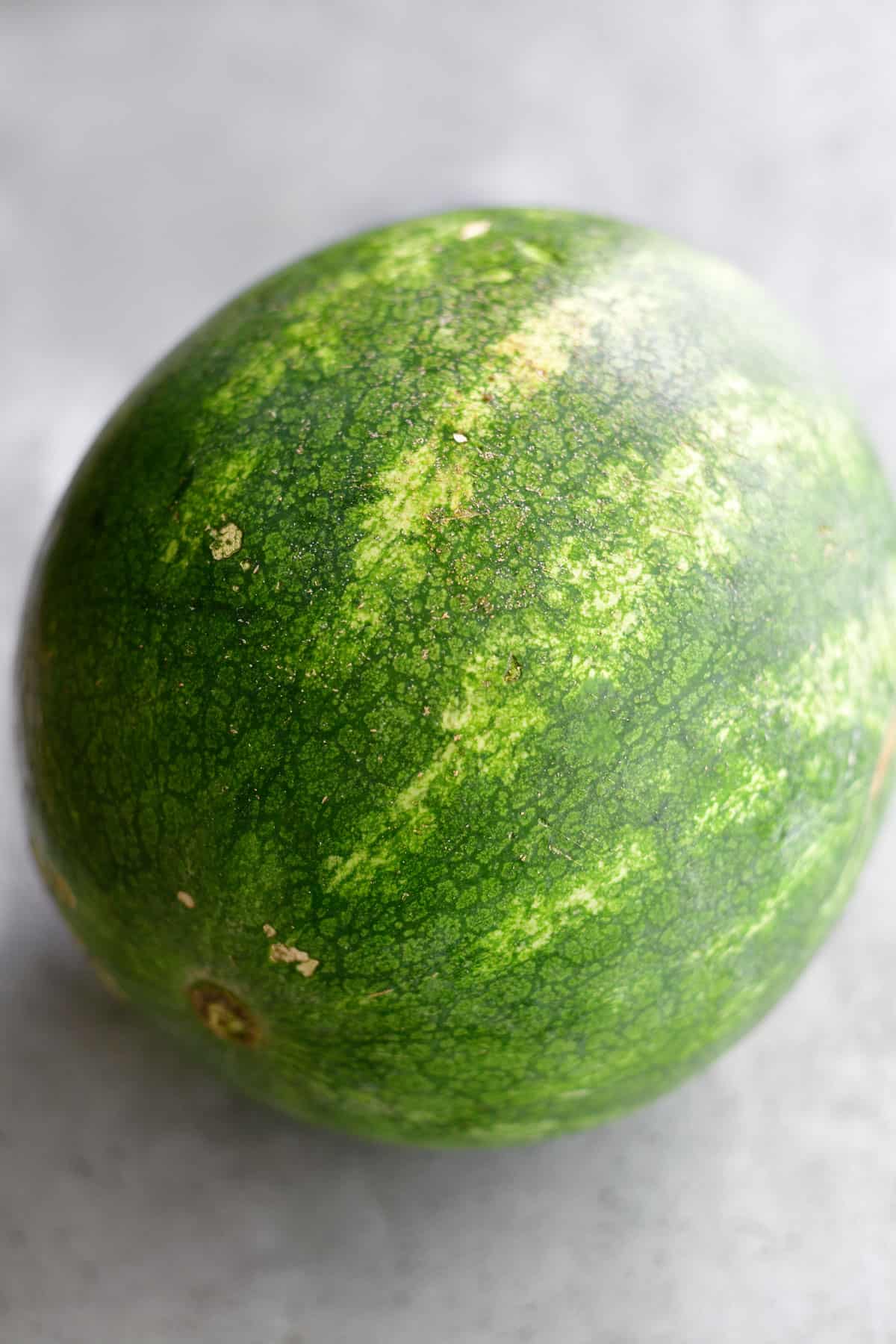 The fifth S in how to pick a watermelon is SKIN. Check the watermelon’s skin for bruises, open gashes, lumps, or bumps. Also, look for a dull or matte looking watermelon skin rather than a shiny one which can mean that it isn’t fully ripe yet.

Symmetry: Pick a watermelon that looks symmetrical meaning it is an oval or circle without any oddness to the shape.

Softness: Gently press on the watermelon to check for softness. A good watermelon should be firm, not soft.

Seeds: Check the sticker on the watermelon to see if it has seeds or is seedless. Both are good but make sure you check so that you are getting the kind you want.

What do the watermelon stripes mean? The stripes on a watermelon are determined by what variety they are. There are over 1,200 varieties grown throughout the world!

What is the best watermelon slicer? Check out my Watermelon Slicer comparison showing various kinds of watermelon cutters, how to use them, how well they work, and which one is my favorite.

What is the best way to cut a watermelon? Here’s How To Cut a Watermelon into wedges, cubes, sticks, rounds, stars, and balls!