This Watermelon Slicer comparison post shows various kinds of watermelon cutters, how to use them, how well they work, and which one is my favorite. 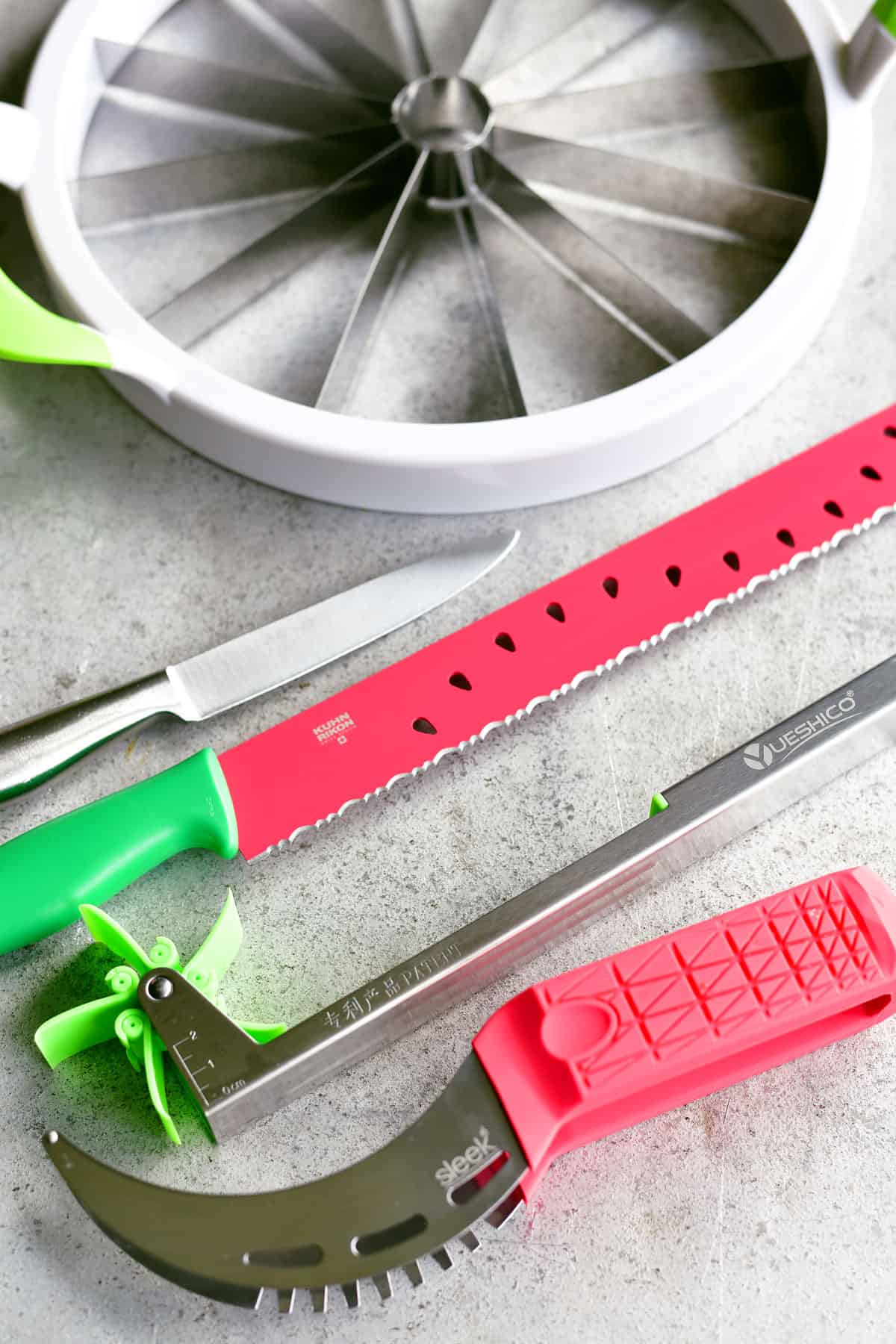 There’s nothing like fresh, juicy watermelon in the summer. After you’ve figured out how to pick a watermelon, it is time to slice it! They are so many kinds of watermelon slicers available so I bought a bunch and tried all of them.

In the photo above you can see all of the slicers I will be comparing. There is a watermelon wedge slicer and corer, a kitchen knife, a watermelon knife, a slicer wheel, and slicer tongs.

Disclaimer: This post contains links to products. If you use those links, I may earn a commission. Learn more here. 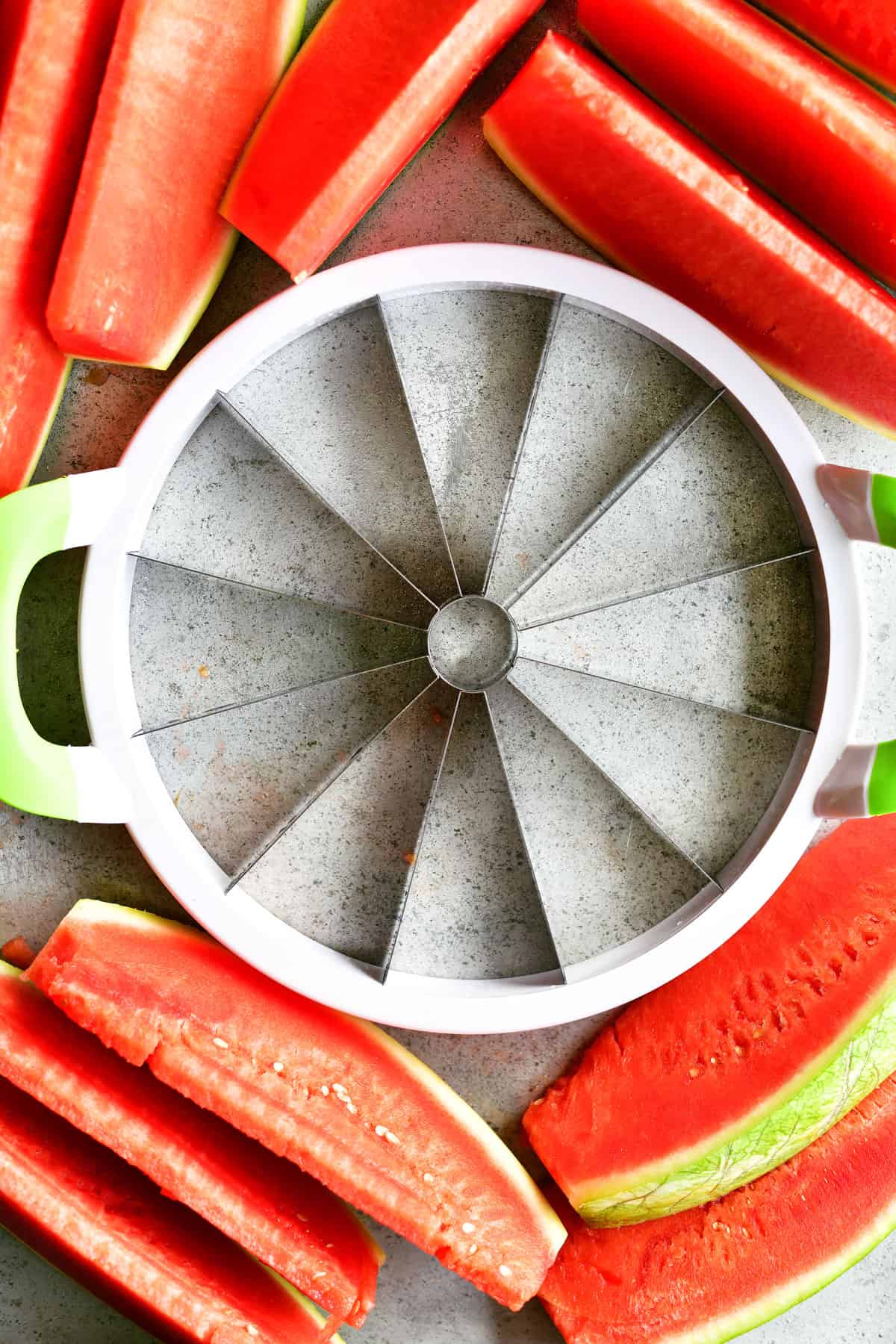 This watermelon slicer and corer cuts a whole watermelon into twelve equal wedges. It’s the same idea as an apple slicer and it works for other kinds of melons too. 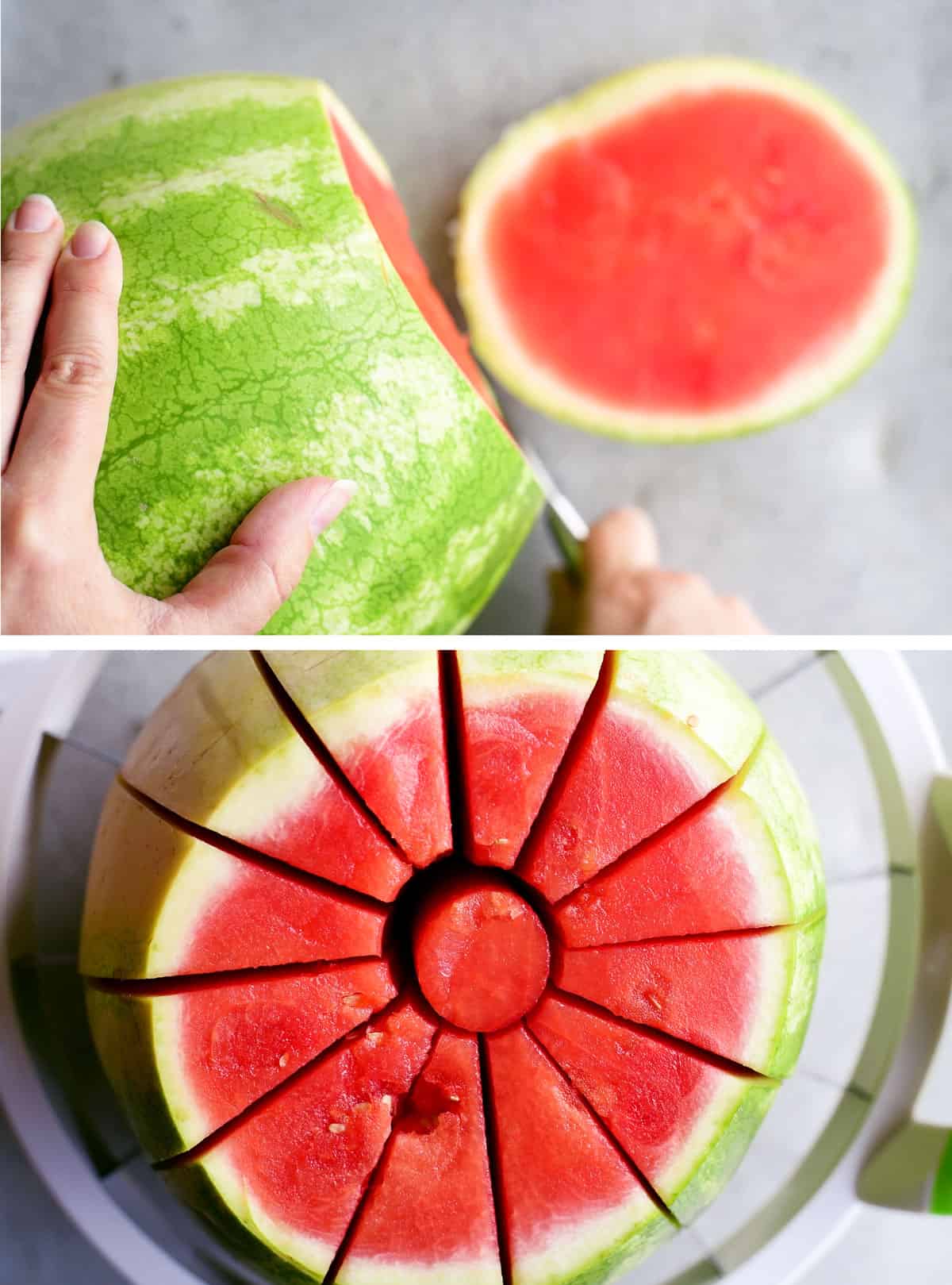 This watermelon wedge slicer works as advertised. I had to work a little harder than I thought I would have to in order to get it all of the way through but I was able to do it in less than one minute. 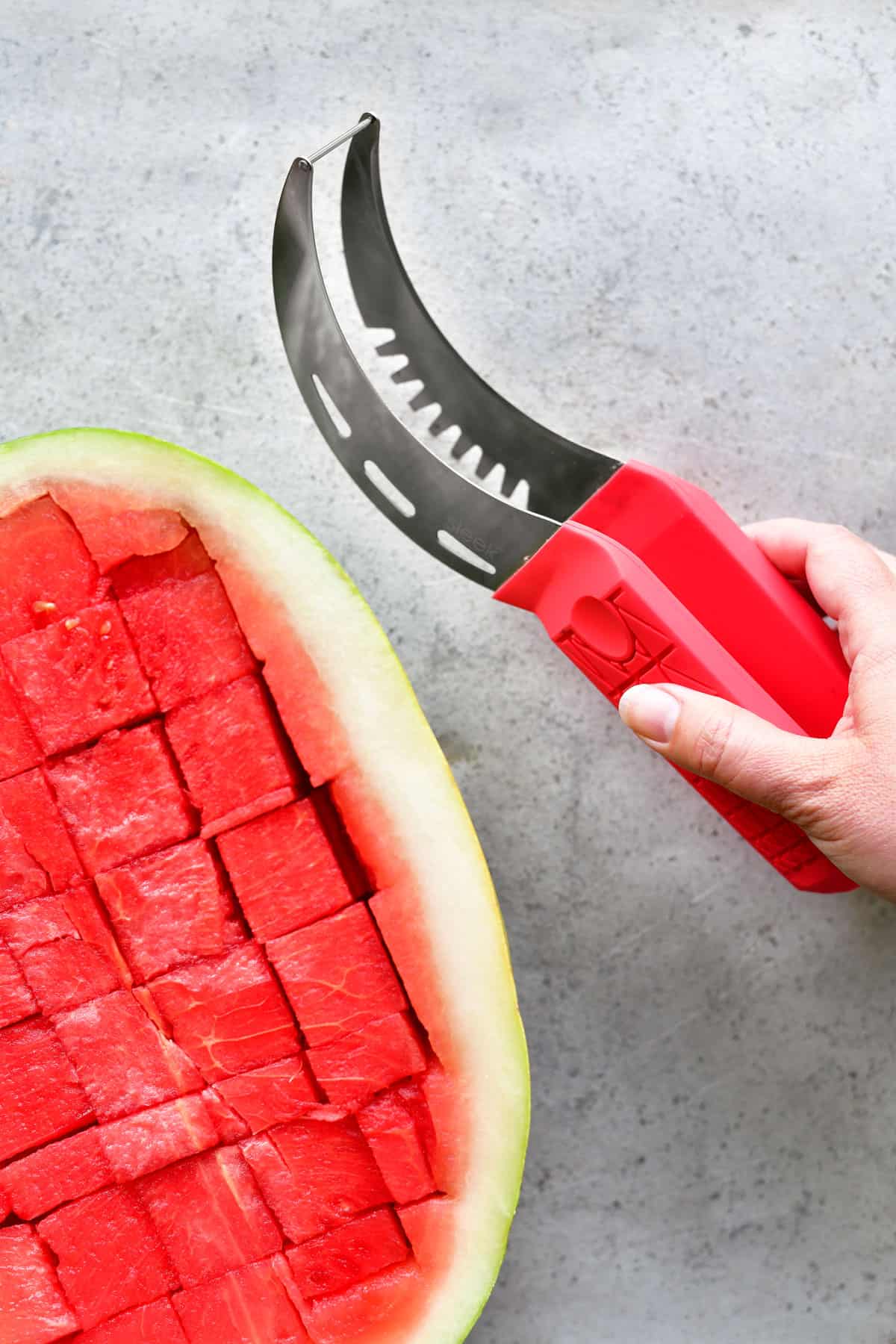 These watermelon slicer tongs cut the watermelon flesh into wedges and into cubes. It can also be used as tongs to grab the cut watermelon from the rind. 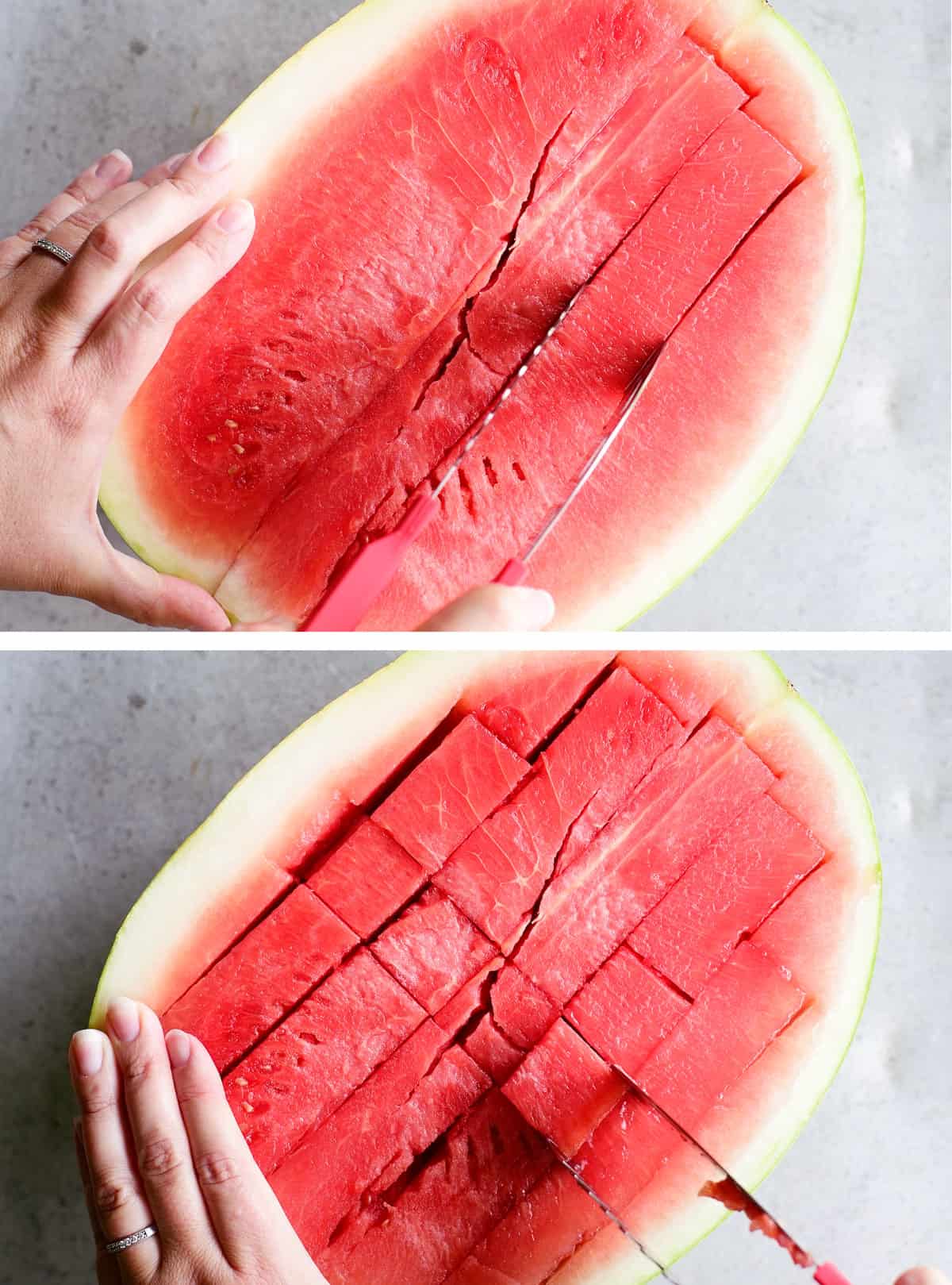 To use these tongs, start by cutting the watermelon in half. Then, hold the handle so that the slicer is arched up like a rainbow. Start at one end of the melon and press the slicer down through the flesh following the shape of the rind and back up the other side.

Flip the slicer over to use it as tongs to remove the watermelon wedges. Or turn the watermelon and make more cuts in the opposite direction to get watermelon cubes instead of wedges.

The watermelon tongs worked just like they are supposed to. I was able to easily cut the watermelon into wedges and cubes. 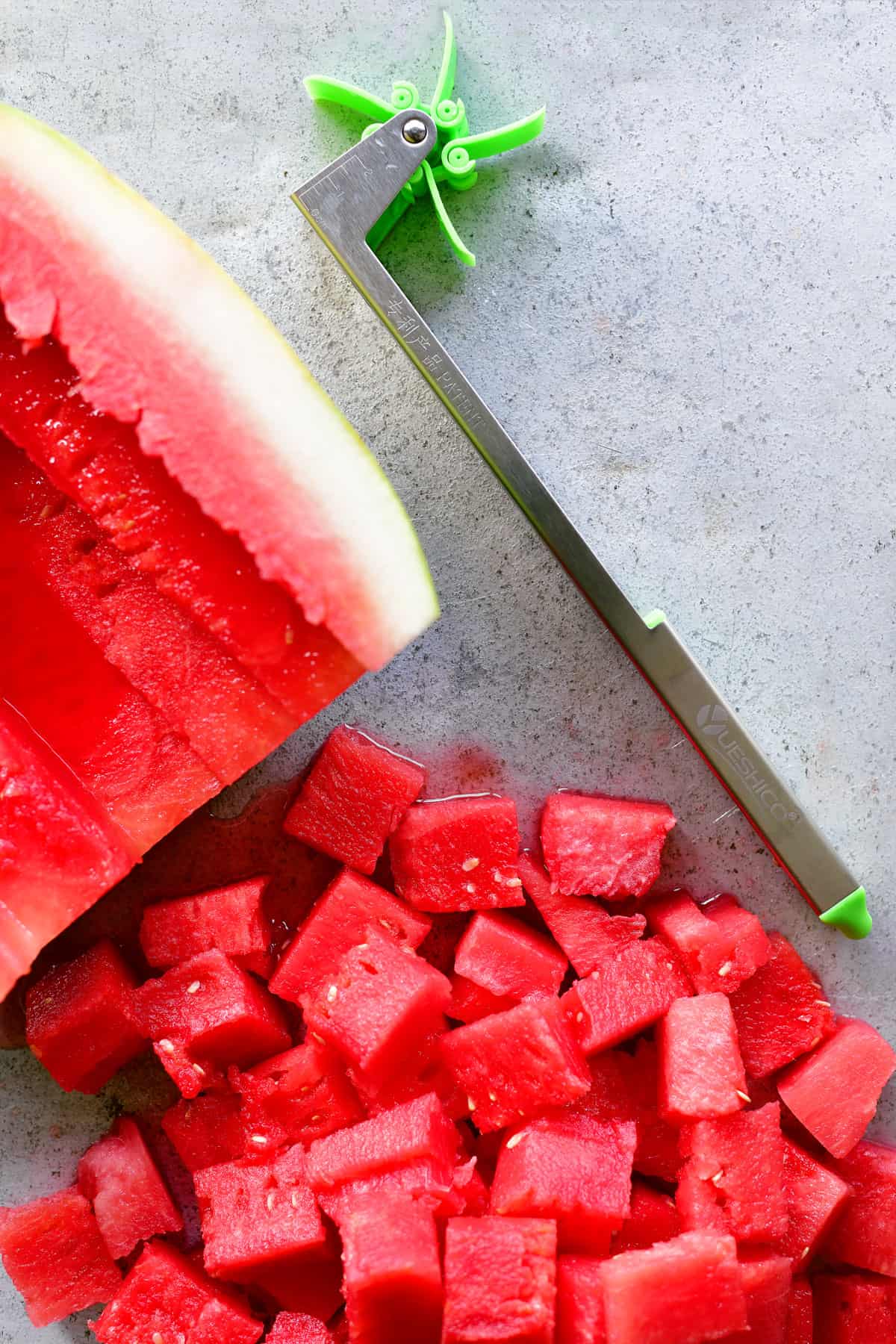 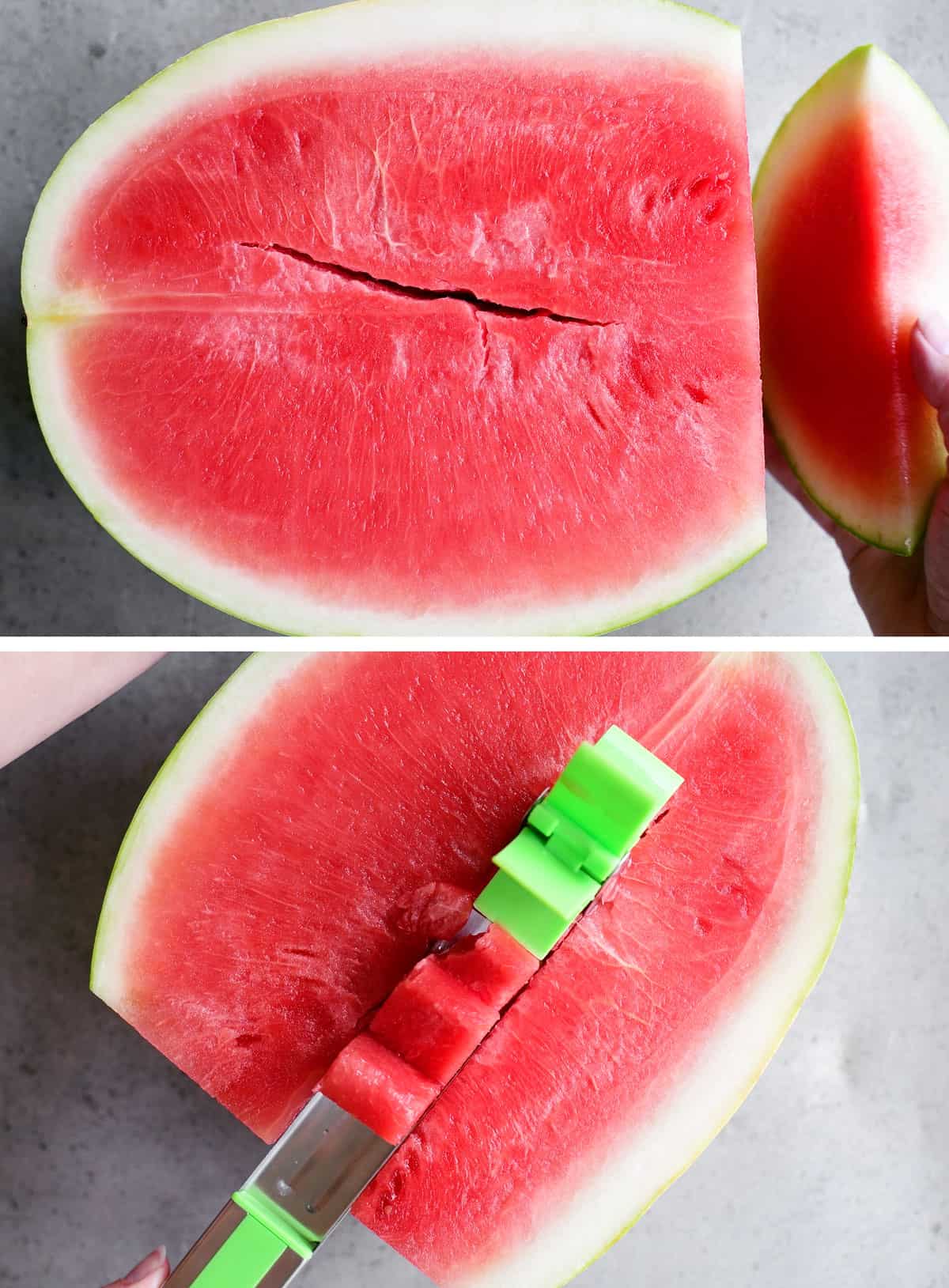 Dump the cubes into a bowl and continue until you can’t make any more cubes.

I was delighted that the watermelon cube slicer wheel worked just like it was supposed to! It was fun and super easy to use. 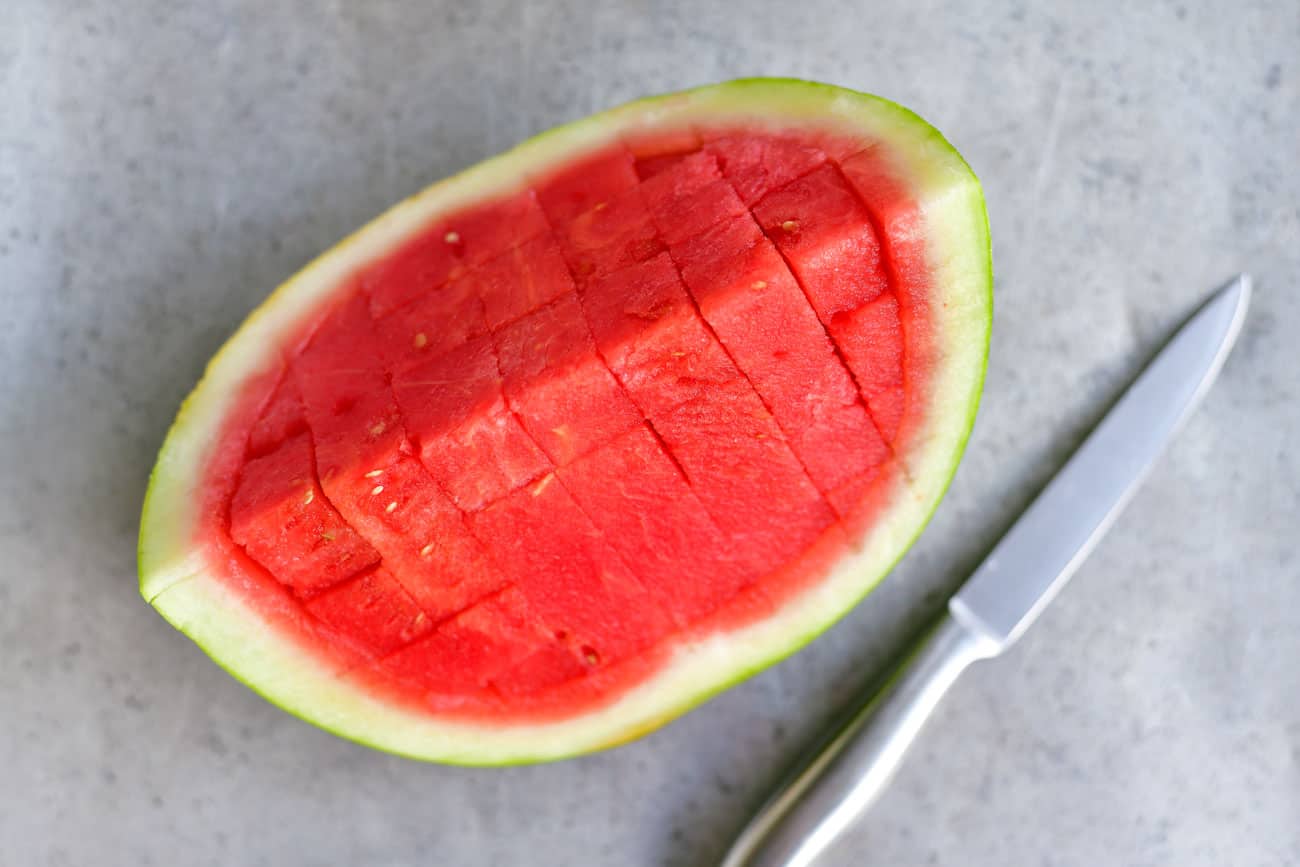 A watermelon cutting comparison wouldn’t be complete without talking about using kitchen knives to cut the melons! The humble kitchen knife is the most common tool.

Start by using a large, sturdy, sharp knife like a chef’s knife to cut the watermelon in half and then into quarters.

Use the chef’s knife to slice the wedges into triangles or switch to a paring knife to make cubes.

Kitchen knives work just fine to cut watermelon. How easy it is to cut the melon will depend on your knives. If you have good quality knives that are sharp, that is all you need to slice watermelon. 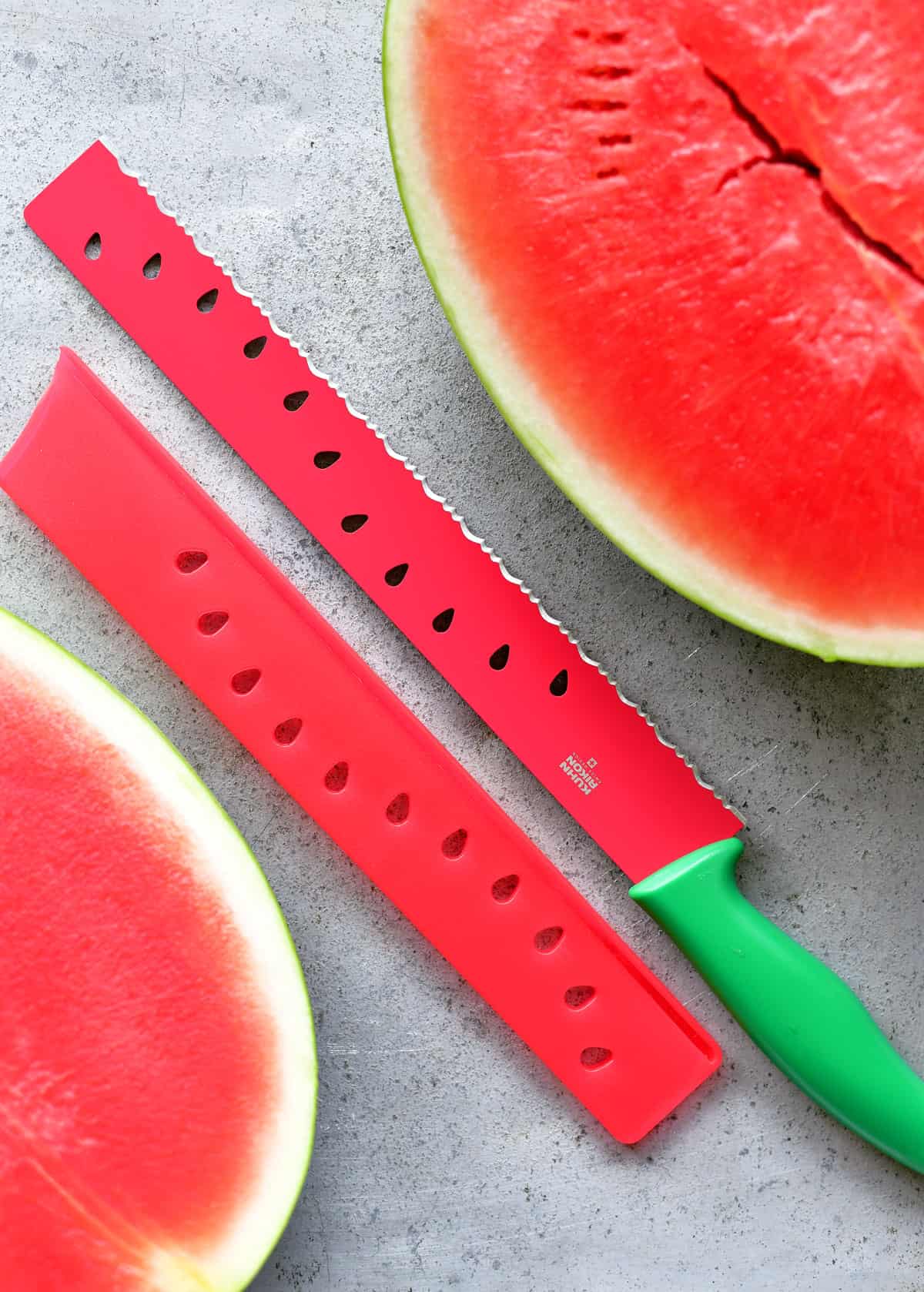 I saved the best for last! The watermelon knife is a long, sharp, serrated knife with a cute watermelon motif on it that is perfect for cutting through the thick rind. 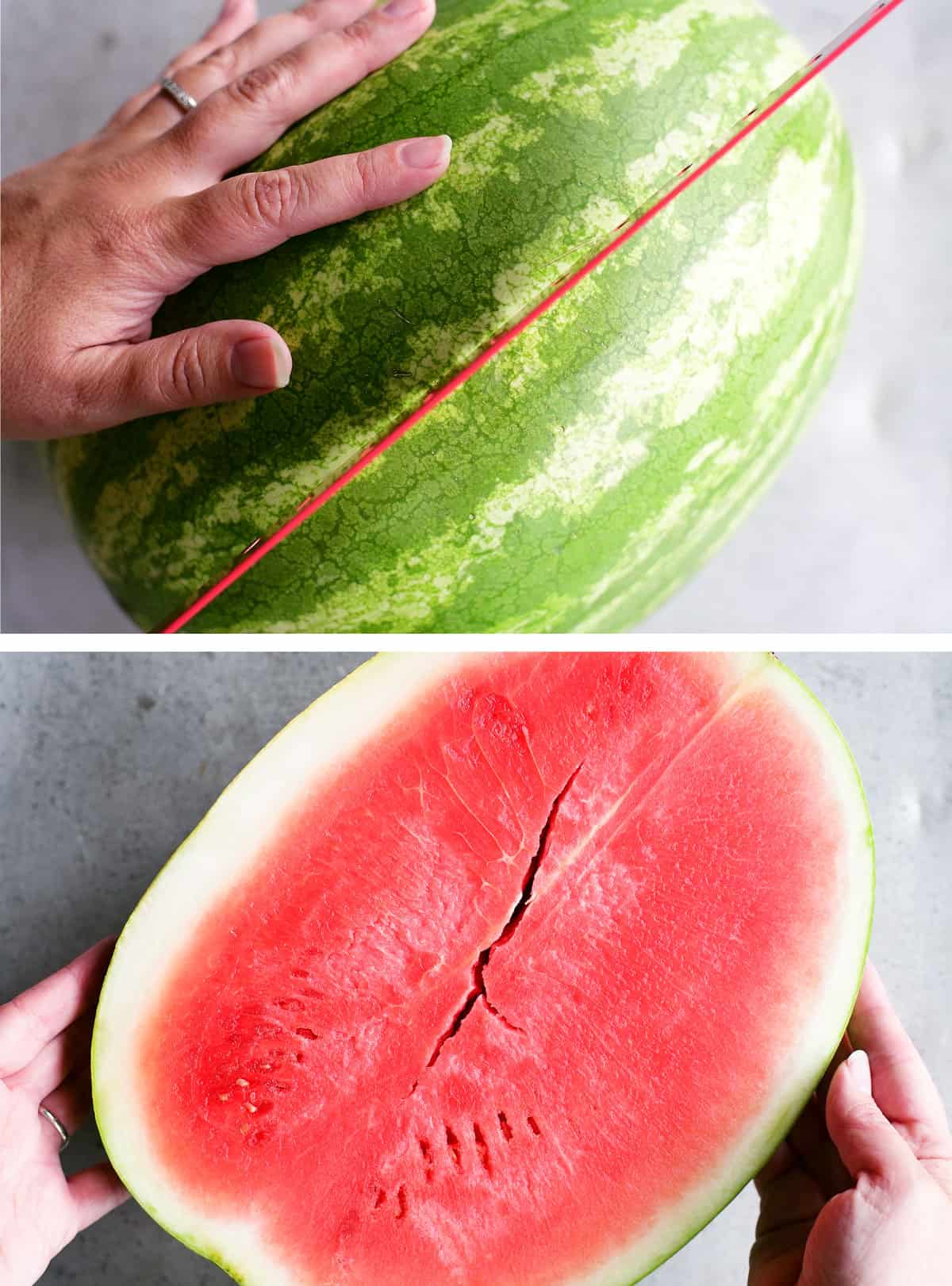 Of all the slicers I tested, the watermelon knife is my favorite! The knife is super sharp and it easily cut through the watermelon. I am definitely going to be using this one the most and can’t wait to try it on other melons too! 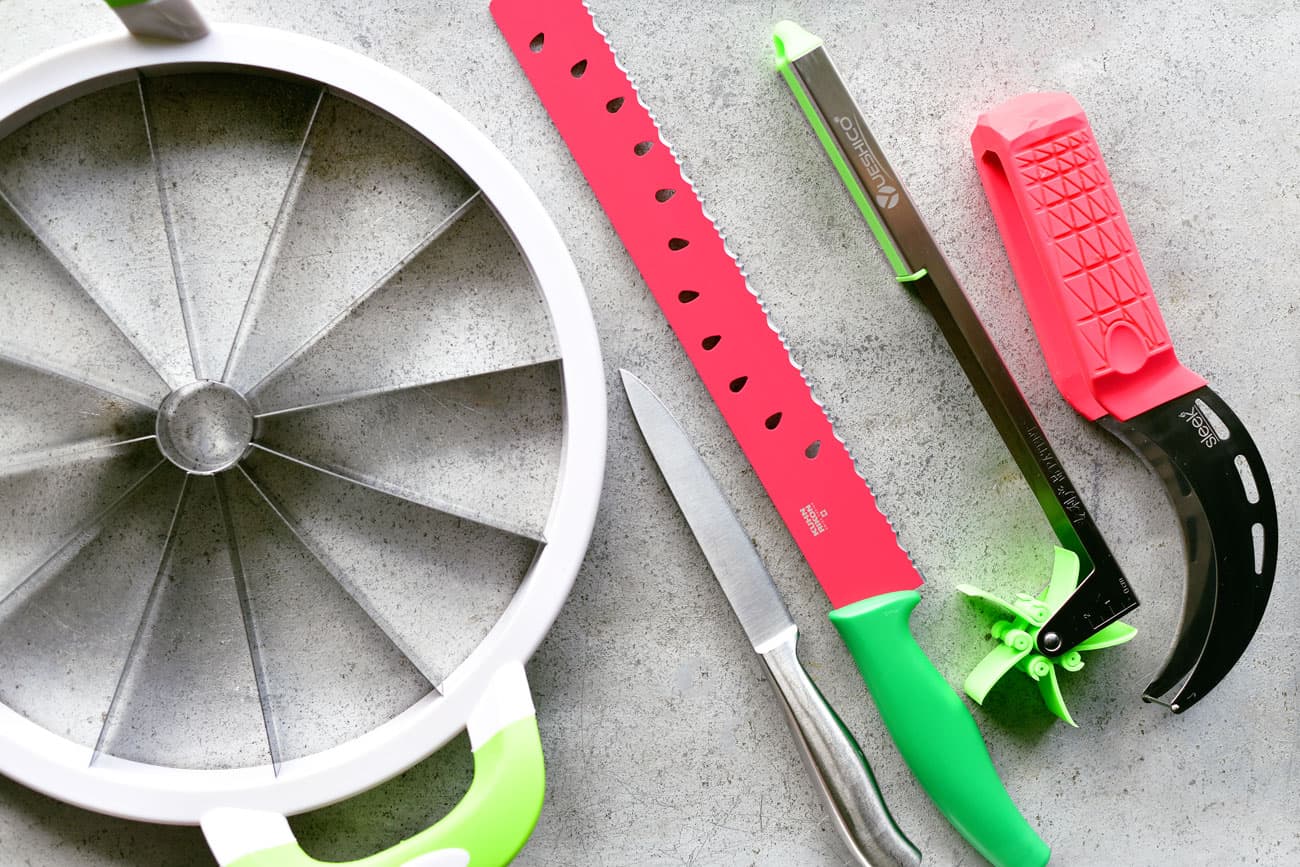 No matter which way you choose to slice a watermelon, enjoy your summer and all of the delicious fresh fruit that is available!

Here Are A Couple of Ways To Use Watermelon

How To Cut A Watermelon

« Mango Chicken Kabobs
How To Pick A Watermelon »