Funfetti Ooey Gooey Bars are fun to eat with a rainbow of colors. It’s a combo of a cake mix cookie bars recipe and Fruity Pebbles Bars recipe! Disclosure: Smuckers sent me free samples of some new products and I use the cake mix in this post. #smuckersfirsttaste 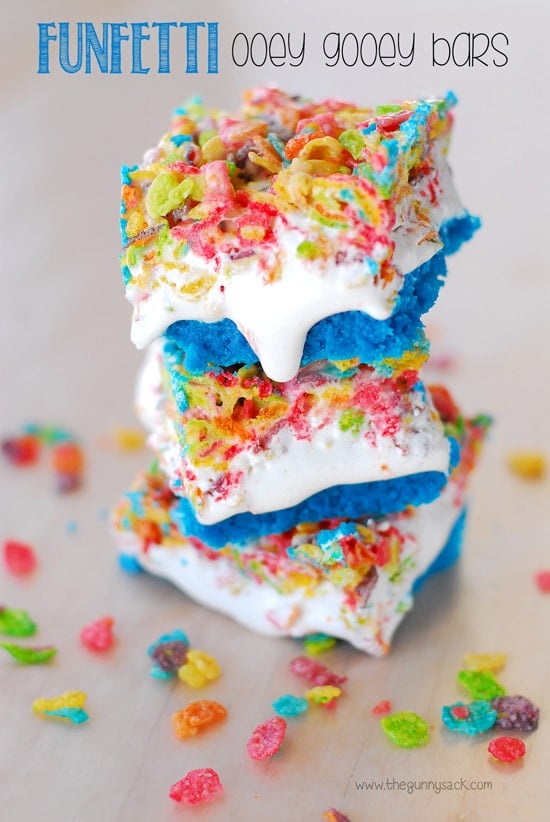 I had big baking plans last week but ended up spending much of my time wrapped in a blanket on the couch because I was sick. Finally, on Friday, I decided I had to try to make some ooey gooey bars using an aqua blue Funfetti cake mix that Smucker’s sent me.

Everything was looking great and smelling delicious…and then I cut the bars and marshmallow cream came oozing out. As usual, my kids were hovering, waiting for me to finish taking pictures so they could sample the bars. I told them that they could go ahead and try these bars since they were a fail.

I was going to have to buy more ingredients and make them again since they were so ooey gooey. I was really disappointed because not only was I exhausted from being sick, my bars didn’t turn out.

But my kids picked up an ooey gooey bar, took a bite and looked at me like I was crazy! They said, “A fail? These aren’t a fail! These bars are awesome! Don’t change them!” I said, “What about how the marshmallow cream is oozing out?” They told me that was “so cool” and since they had almost finished their first bar, asked if they could have a second one.

Vanessa went babysitting on Friday evening at our friend’s house and brought some of the Funfetti OoeyÂ Gooey Bars with to share. Everyone there (the kids and the parents) loved them too. So, I left the bars just as they were and called them a success! 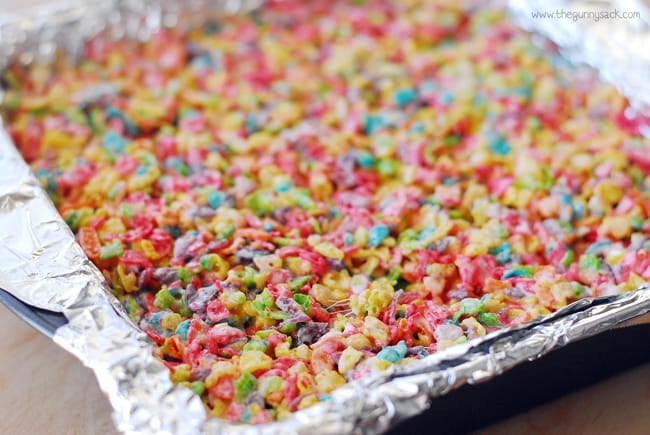 For the top layer, make this Fruity Pebble bars recipe: Microwave 1 1/2 tablespoons of butter for 20 seconds in a large bowl, until melted. Add 3 cups of mini marshmallows and stir to coat. Microwave for 45 seconds and stir until smooth. (If the marshmallows aren’t completely melted, microwave for an additional 30 seconds.)

Mix in 3 cups of Fruity Pebbles. Drop by large spoonfuls over the marshmallow cream layer and carefully spread out evenly. I put my hand in aÂ plastic baggieÂ with a little butter on it and gently spread it out and patted it down. 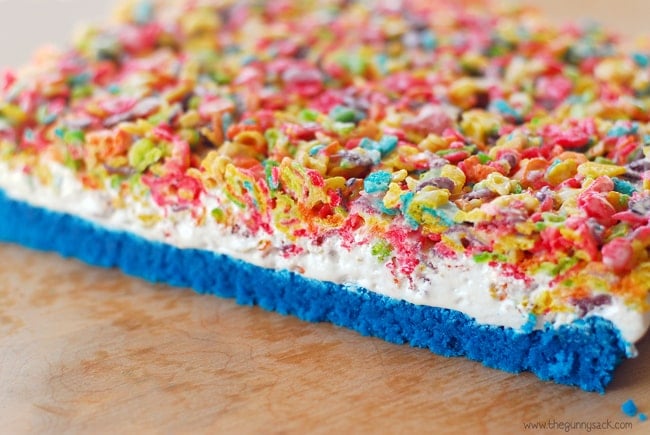 Allow the bars to cool before cutting. I would recommend waiting to cut the bars until ready to serve since the marshmallow cream is going to be very ooey gooey!

To serve, remove the bars from the pan by lifting them with the foil. Carefully peel the foil off (I flipped the bars upside down on a cutting board and then peeled it off) and use a serrated knife (greased if necessary) to cut the bars into squares. 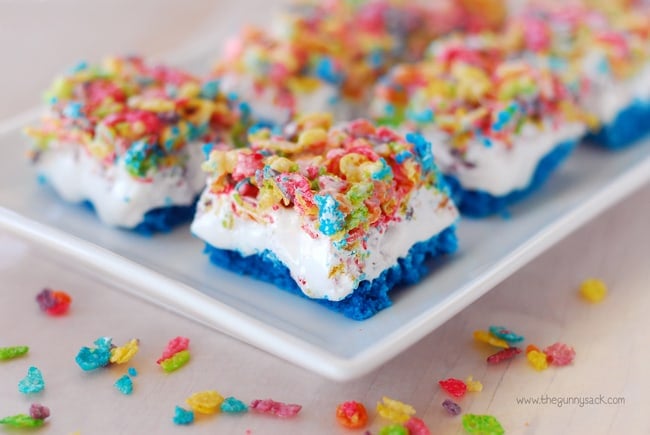 Your kids and maybe even your friends will be super impressed! Zack told me that these Funfetti Ooey Gooey Bars “are like the best thing he’s ever eaten!” 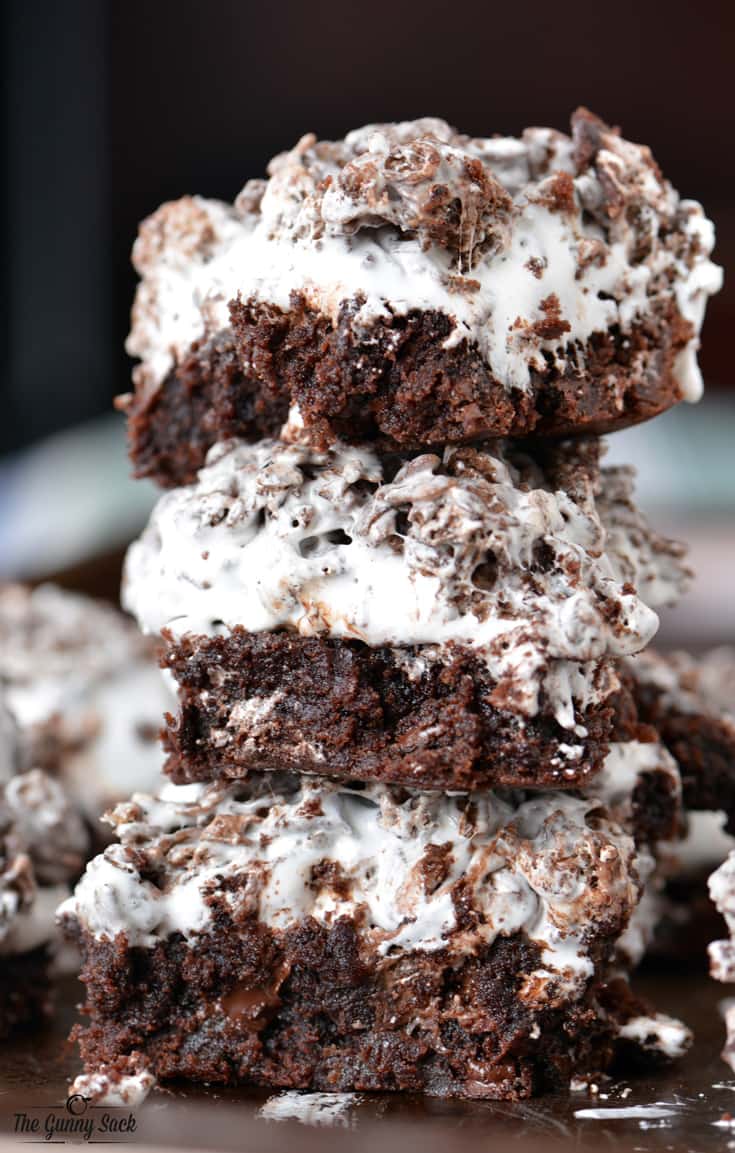 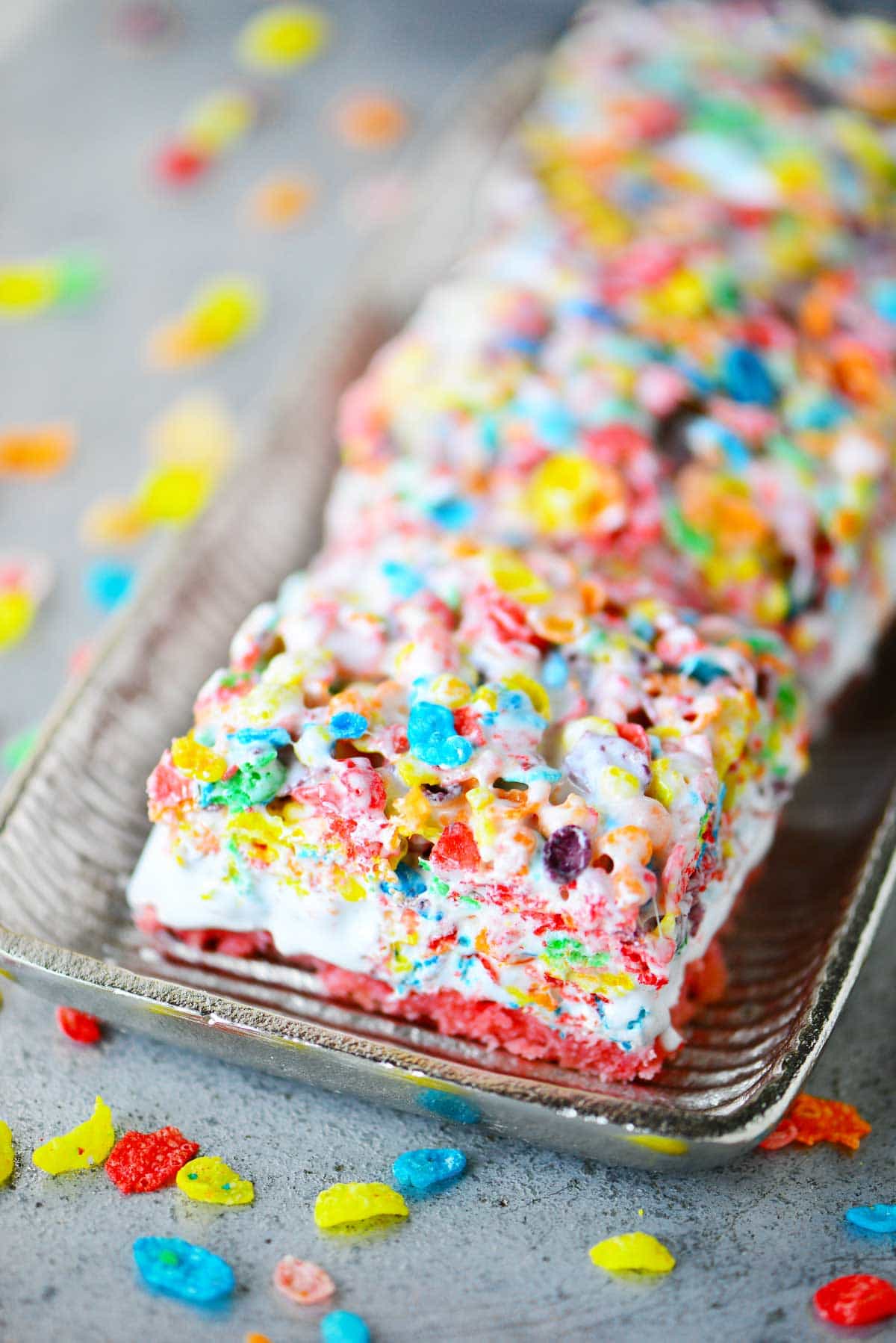