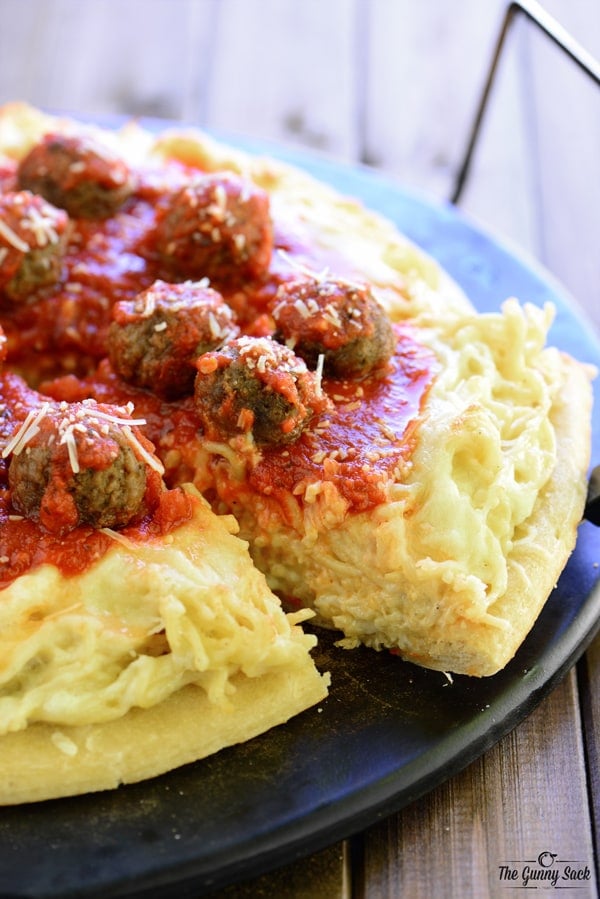 One of my families favorite foods to eat is pizza. There was a pizza restaurant in a city close to ours that closed recently and we were so disappointed. We loved going to that specific pizza place because they had so many different kinds of pizza.

One of our favorites was the mac & cheese pizza and I’ve shared a recipe for my own version of the macaroni and cheese pizza. Today I’m excited to share a new pizza recipe that also features pasta since one of the most popular recipes on The Gunny Sack is my Baked Spaghetti Recipe.

Like that recipe, this Spaghetti and Meatballs Pizza that features creamy Alfredo baked spaghetti topped with meatballs and sauce.

How To Make A Spaghetti and Meatballs Pizza 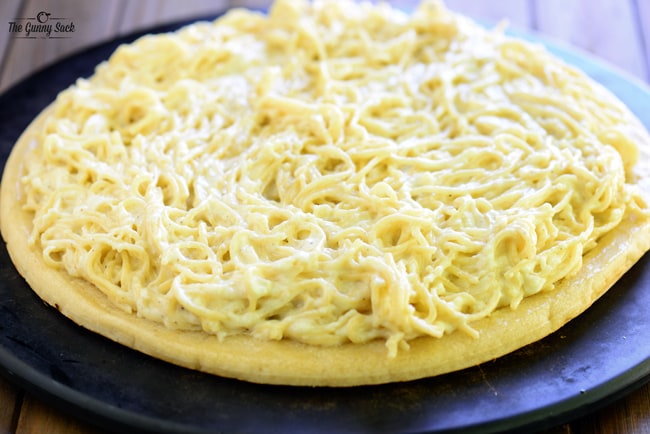 Start by making the Alfredo sauce on the range. Bring half-n-half cream, minced garlic, pepper and salt to a boil over medium heat. Add the butter and softened cream cheese, stir until smooth. Using a fork (or a whisk) whisk in shredded Parmesan cheese, one cup at a time, until smooth.

While the Alfredo is cooking, make the spaghetti noodles in a separate pot. Pour the Alfredo sauce over cooked pasta. If it looks like too much Alfredo leave about 1/2 cup aside. Spread the creamy Alfredo pasta out on a prebaked pizza crust. I used a store-bought pizza crust to make things easier, but you can use homemade if you prefer. 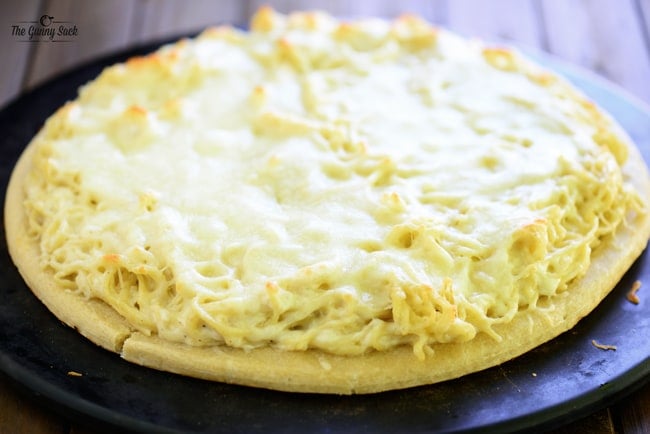 Sprinkle with one cup of shredded Mozzarella Cheese. Bake at 425 degrees for 10-12 minutes until golden and heated through. 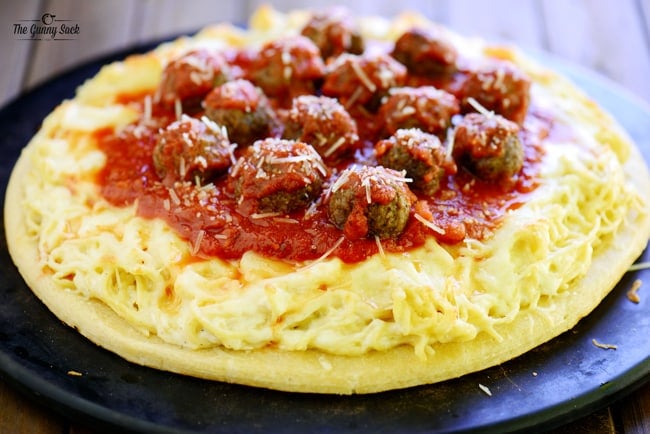 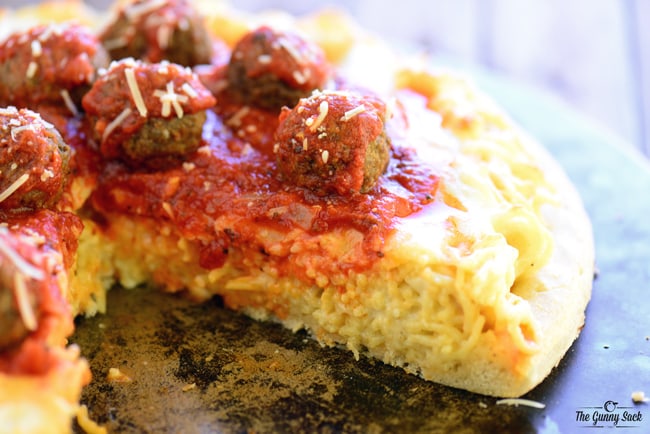 I used my kitchen shears to cut this baked spaghetti pizza into slices. You can see the creamy Alfredo spaghetti on the crust and the spicy spaghetti sauce and meatballs on top! 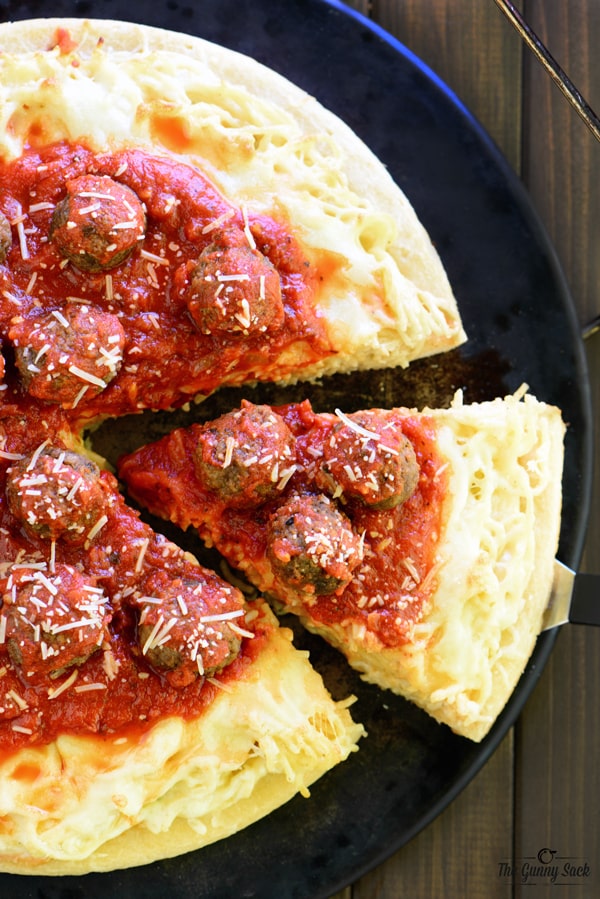 My family thought the spaghetti and meatballs pizza was fantastic but be warned it’s very filling. You won’t need as many pieces of pizza as you usually would. The combination of the creamy baked Alfredo spaghetti with the meatballs and sauce is so much fun to eat on a pizza! 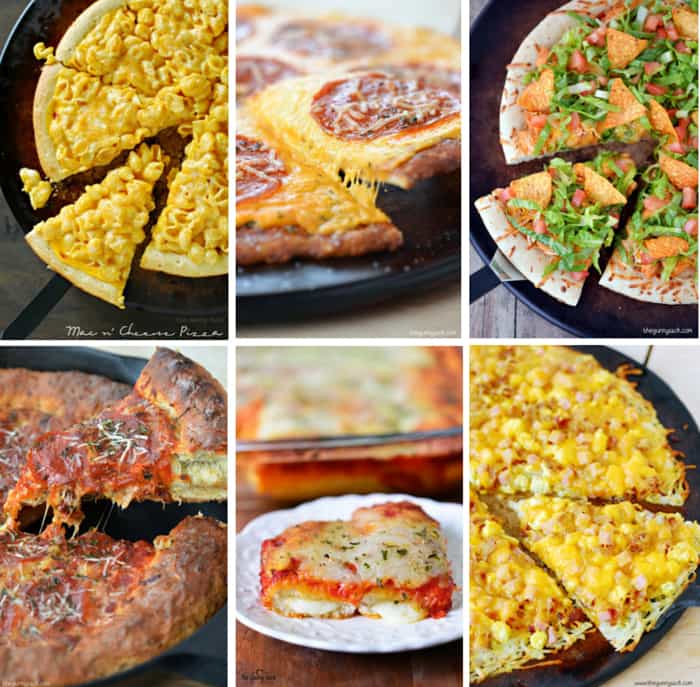