A s’more is a quintessential summer dessert and this easy S’more Pie Pops recipe captures the goodness of s’mores in a flaky pie crust. 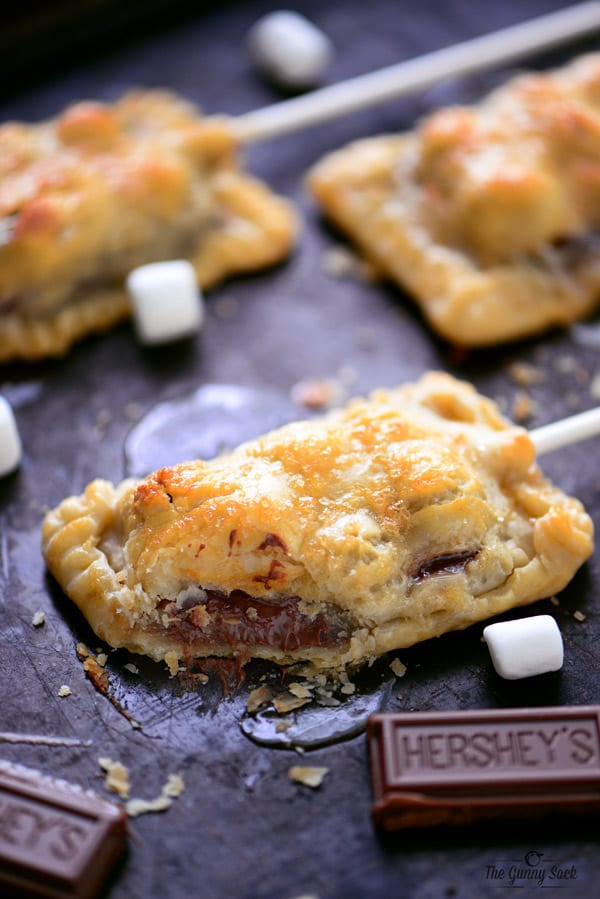 We had so much fun with the Peanut Butter Cup Pie Pops that I decided to make S’more Pie Pops too! With the arrival of warm weather, everyone wants to be outside.

While I was driving around this weekend, I smelled so many bonfires. My nephew was super excited to report that they had their first campfire of the year.

S’mores are the summer desserts that go hand in hand with fires. All summer long, we have graham crackers, marshmallows and chocolate bars on hand so that we are ready when the mood strikes.

This S’more Pie Pops Recipe has a flaky pie crust instead of the graham crackers. I thought about putting a graham cracker inside each pie on a stick but my kids didn’t want me to so I left them out.

How To Make S’more Pie Pops 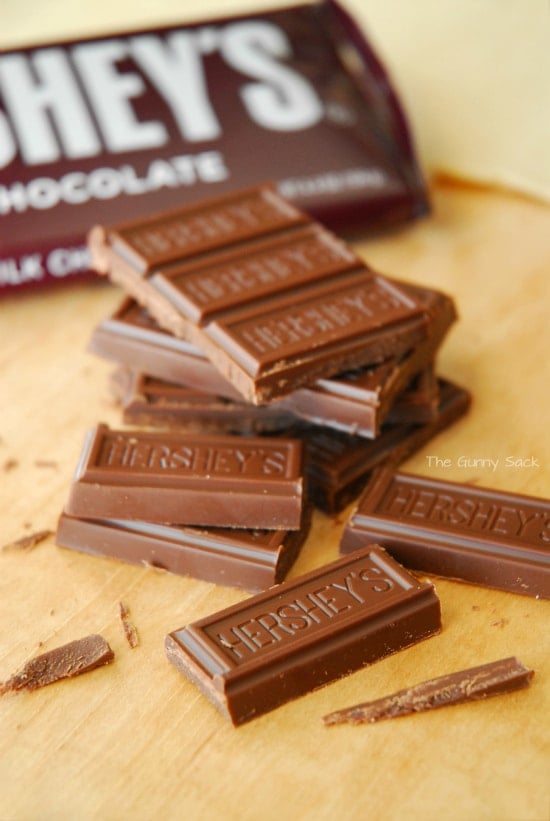 Unroll a refrigerated pie crust onto a lightly floured surface.

Or if you prefer, roll out a homemade pie crust. 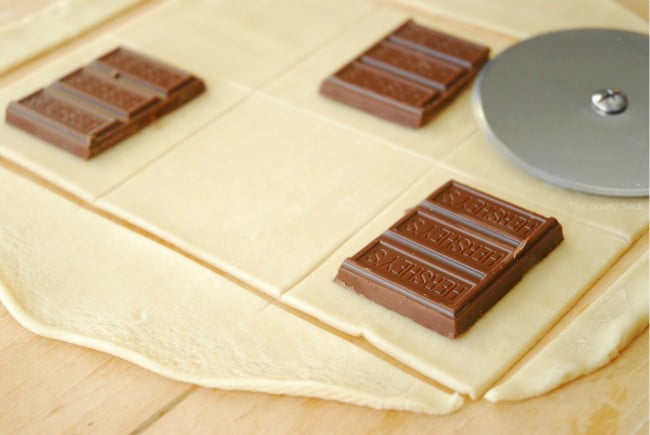 Cut the pie crust circle into a rectangle and cut out six rectangles of dough using the Hershey’s bar pieces as a guide for the size. 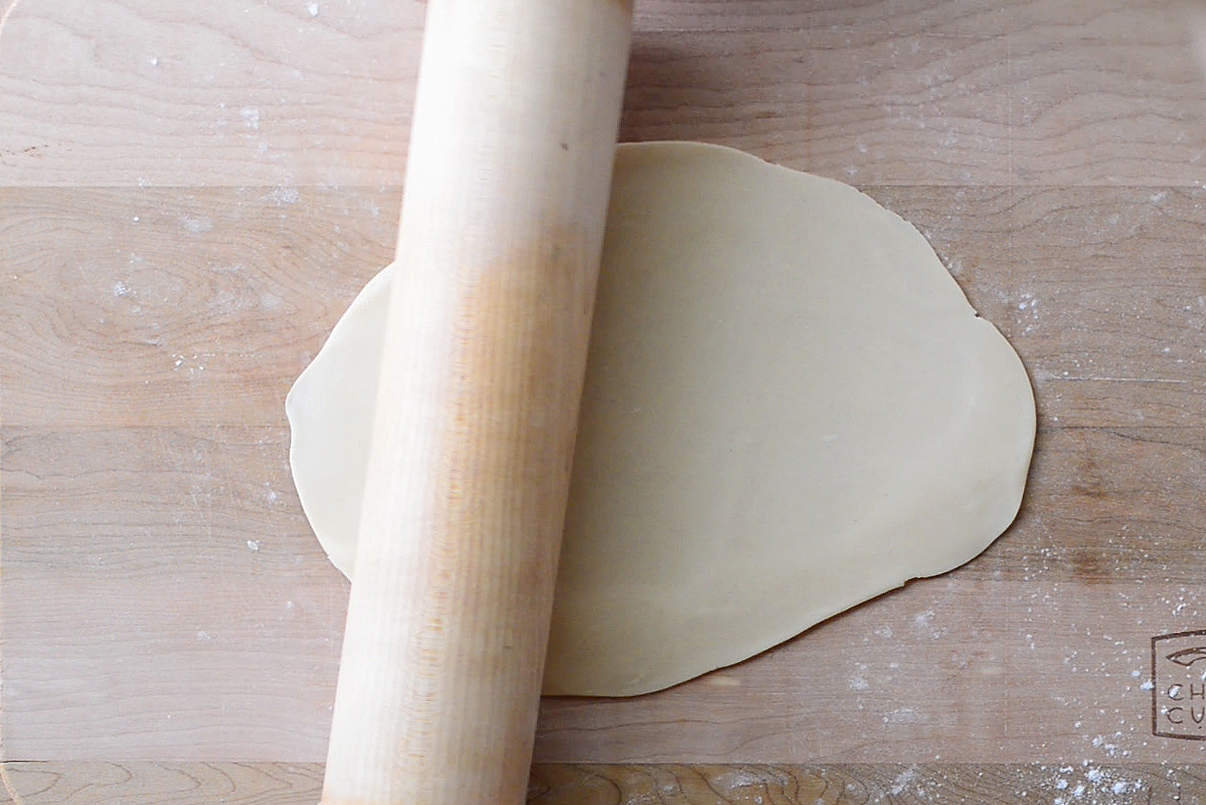 Take the dough scraps, knead them together and roll it out to cut out two more rectangles.

I was able to make four large S’more Pie Pops from one crust. 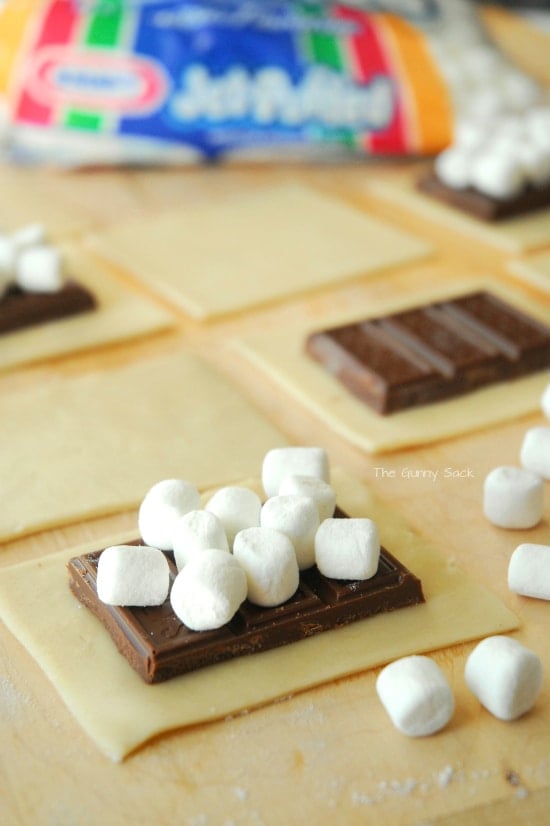 Put three chocolate bar segments on four of the rectangles of pie crust. 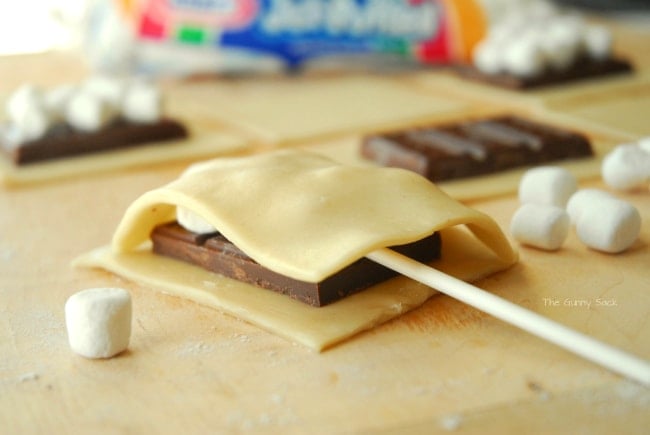 Put another rectangle of dough on top of the marshmallows and add a lollipop stick. 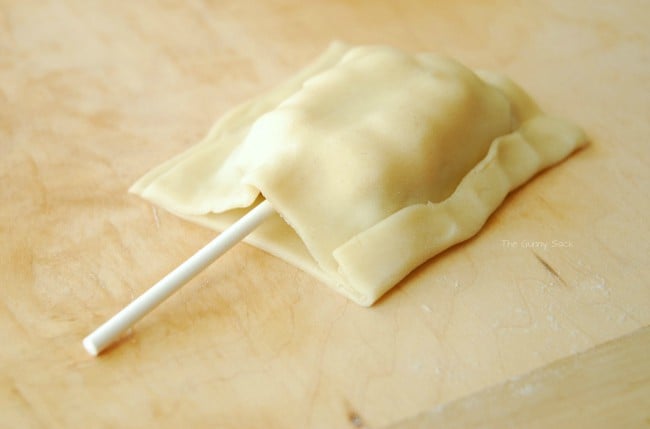 Fold up the edges of the dough and press to seal. 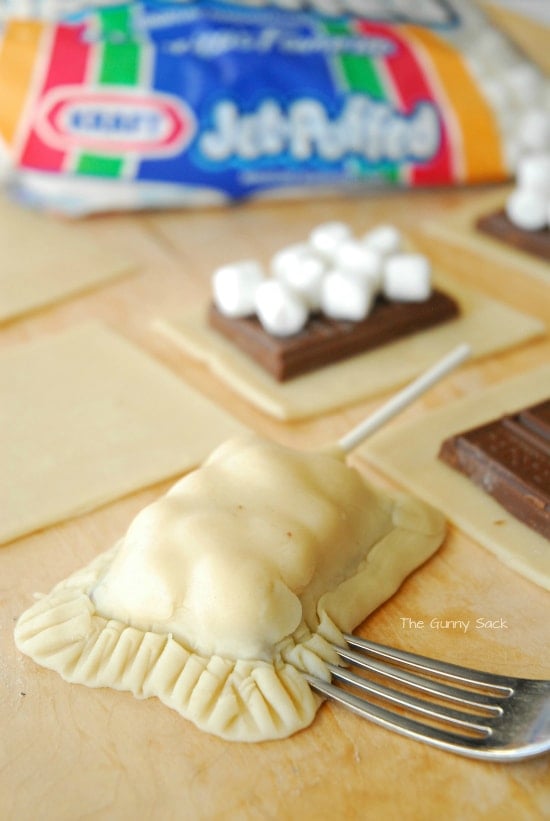 Use a fork to crimp the edge together. 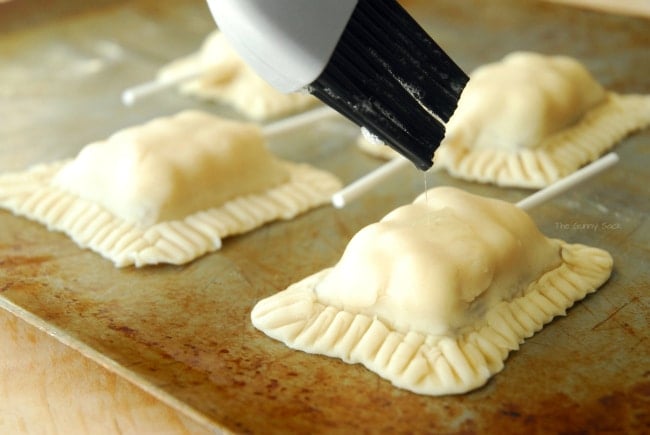 Place the pie pops on a baking sheet.

Brush them with a beaten egg white and sprinkle with granulated sugar or sugar crystals.

When the s’more pie pops come out of the oven, let them cool for a couple of minutes and then press the lollipop sticks down into the chocolate. That way, once the chocolate hardens the stick will be embedded in it. 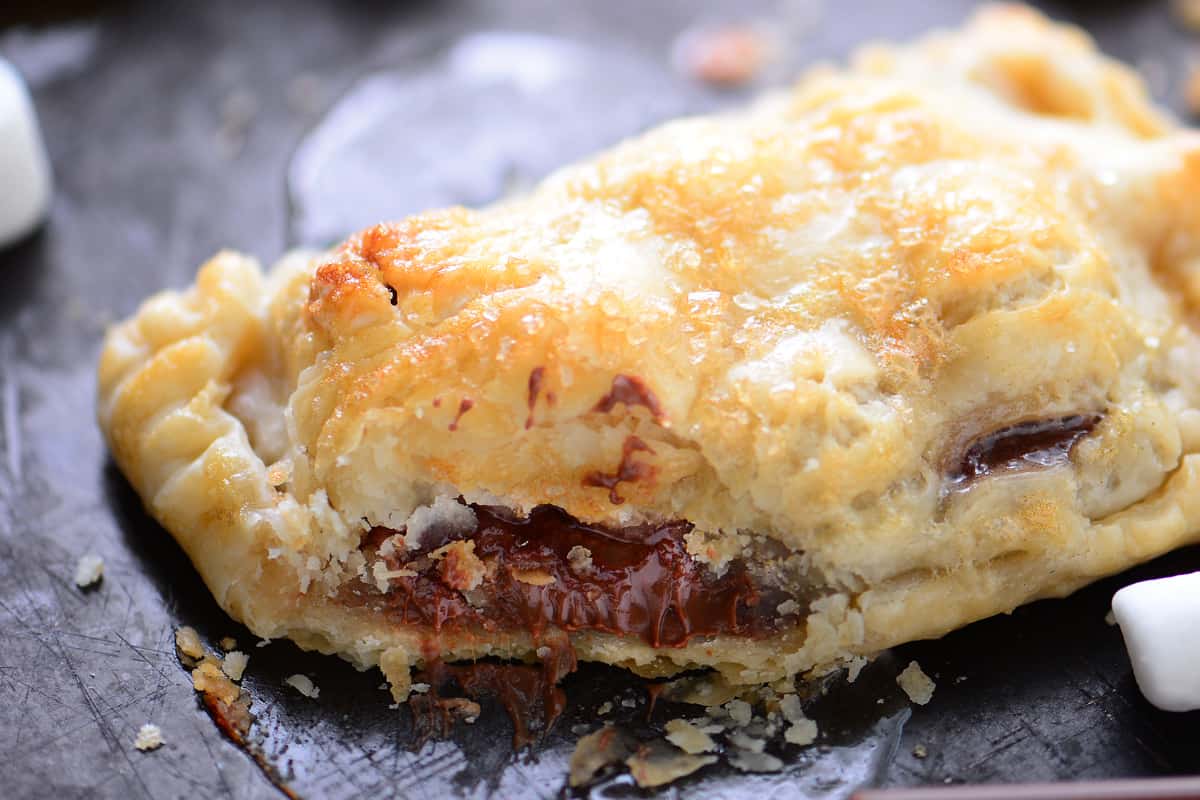 1. Where are the graham crackers? These aren’t truly s’mores without them!

My kids didn’t want me to add graham crackers. They said the crust was enough. If you want graham crackers, put them underneath the chocolate segments. Or crush the graham crackers and sprinkle them inside and/or outside.

2. Can I stop the marshmallows from leaking out? The mini marshmallows puff up when baking and stretch the pie crust. The liquified marshmallows can leak out from any holes that were already there or ones that are made during the stretching. The flavor of the marshmallows is still there though. 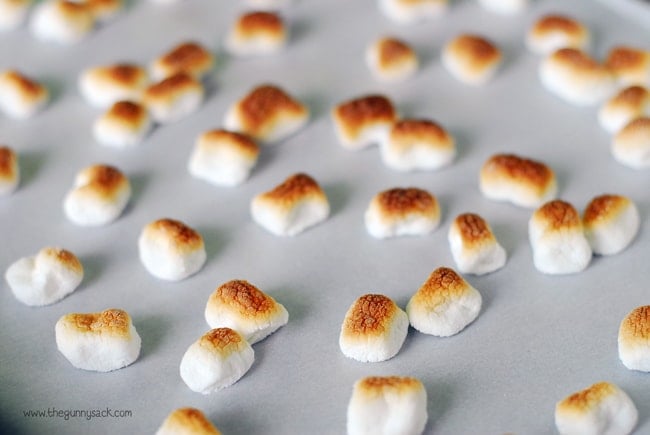 3. Could I toast the marshmallow BEFORE adding them to the pie pops for that toasted marshmallow taste?

Yes! Toast the mini marshmallows under the broiler, on a pan lined with parchment paper. Watch them carefully and remove when golden brown. 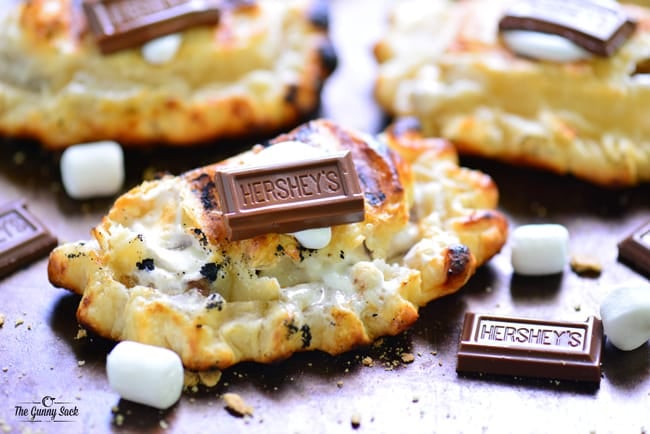 5. Can I make these s’more pie pops on the grill?

Yes, check out my recipe for s’mores hand pies here. If you want the lollipop stick, insert it after you’ve finished grilling them while the chocolate is still soft.

6. Do I have to use a lollipop stick? No. You can use a popsicle stick instead or make hand pies without any sticks.

7. Any suggestion to try for keeping the marshmallows in or for more marshmallow flavor? Try putting marshmallow cream on top of the chocolate and then adding the mini marshmallows like I did for the s’mores hand pies.

Or try toasting the marshmallows before adding them to the pie pops (instructions above). Another option is to try adding some Jet-Puffed Mallow Bits since they are crunchy marshmallows. 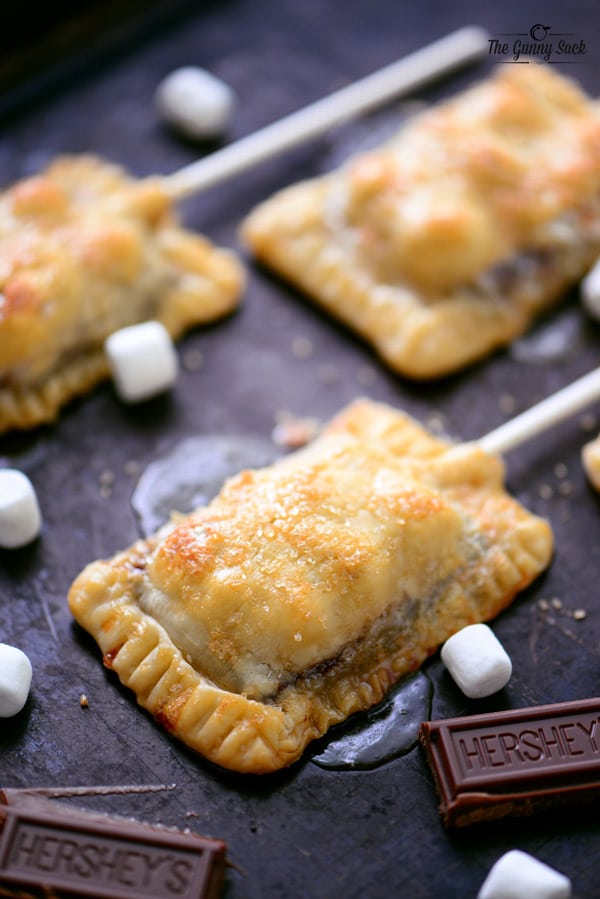 The mini marshmallows will puff up and may disappear but the crust will keep the shape of them. Some of the liquid marshmallows leaked out of the pie pops but it didn’t matter.

My kids absolutely loved these pie pops. The like them even more than the peanut butter cup pie pops and said they tasted just like s’mores!