Serve Two Ingredient Dough Naan Flatbread as a side or turn it into mini pizzas or sandwich wraps! It’s EASY to make with no yeast and no waiting for dough to rise! 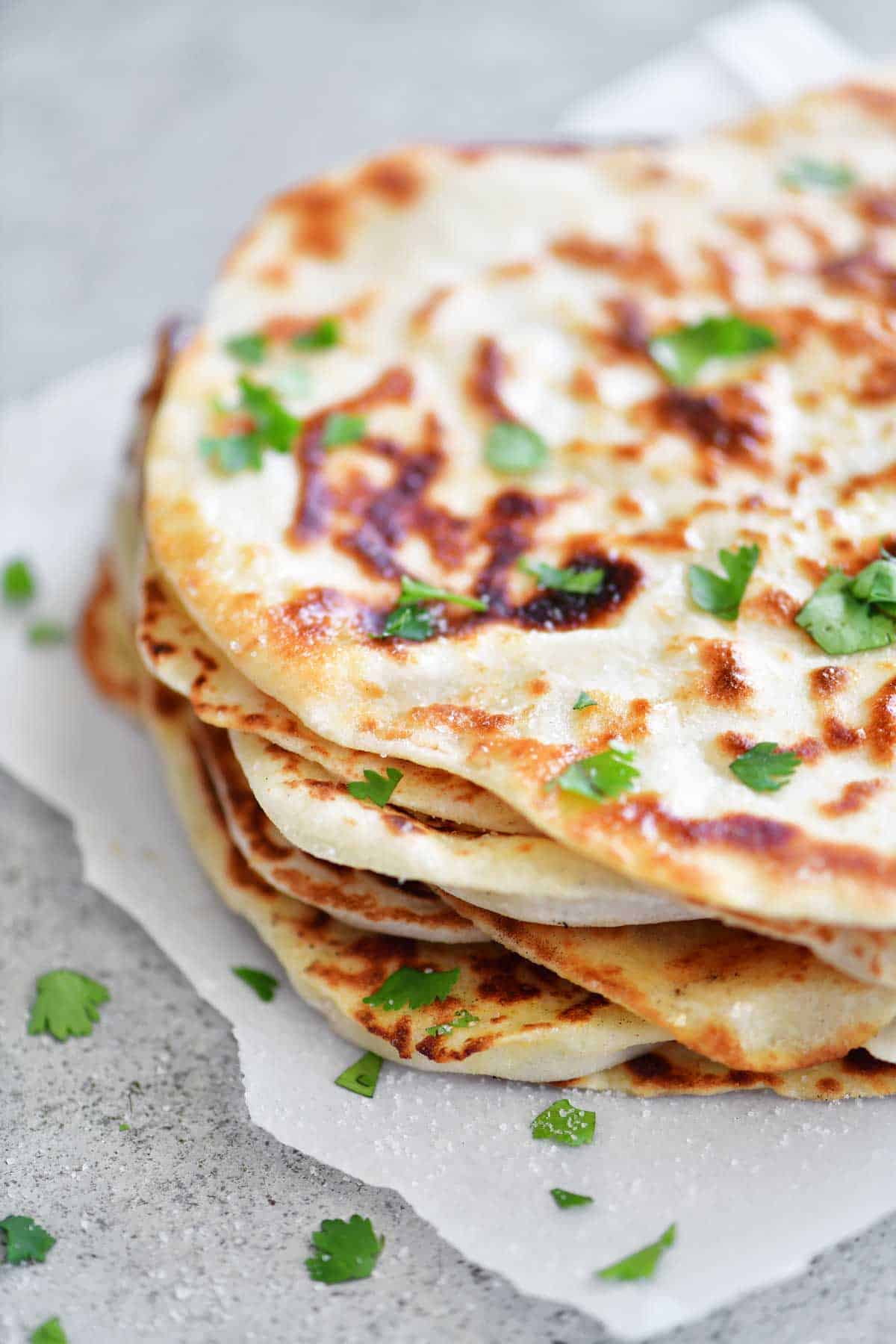 But the dough used to make the naan flatbread is made with two ingredients: self-rising flour and greek yogurt. This versatile dough is easy to make and can be used in so many different ways.

Where is the Two Ingredient Dough Naan Flatbread recipe? In this post, I will share step-by-step instructions with photos for how to make the naan flatbread, as well as answering FAQs about the recipe and sharing a short video showing the recipe in motion. But you can go directly to the recipe by scrolling down to the bottom of the post. 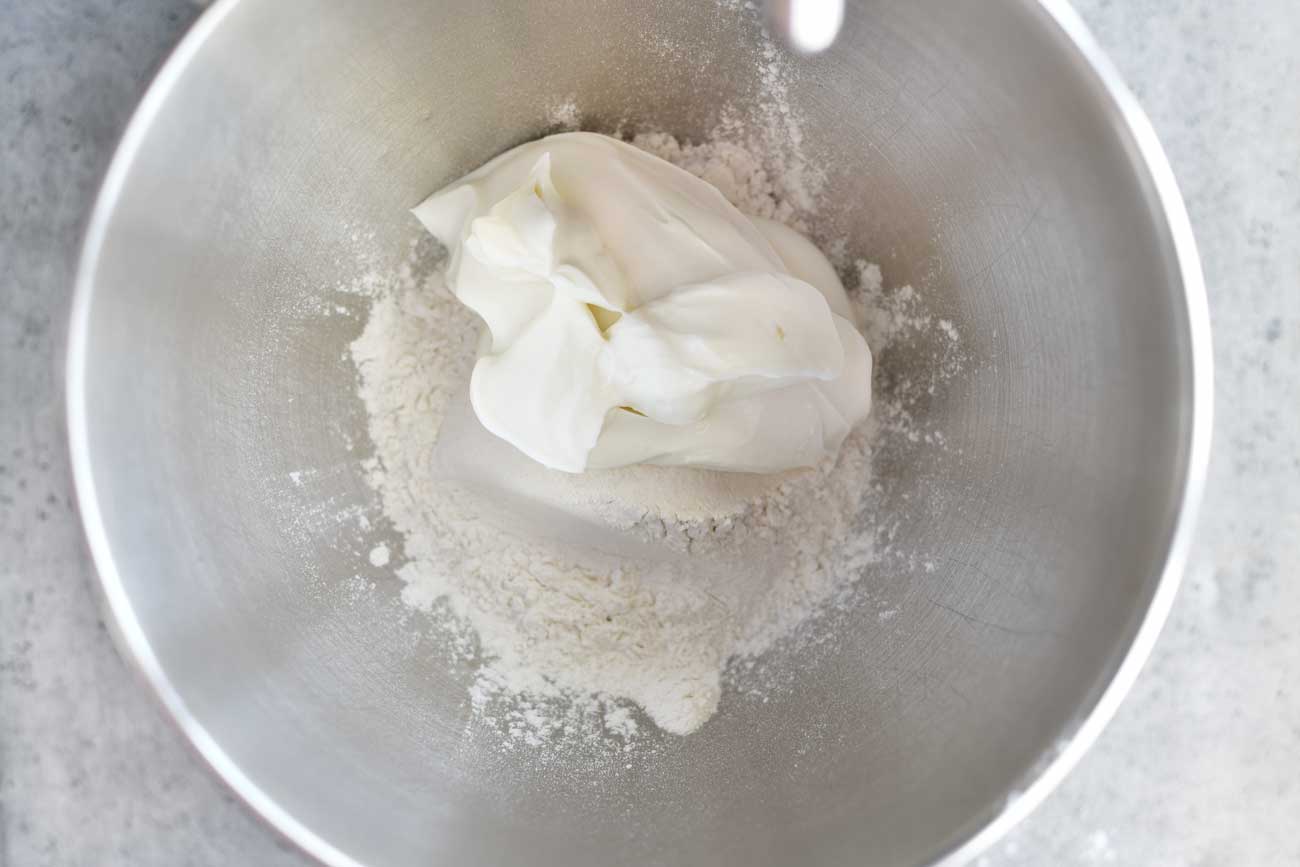 Yes, it really is that easy! Just put the self-rising flour and fat-free greek yogurt in your mixing bowl.

If you don’t have self-rising flour, you can make your own. See the FAQ’s section below. 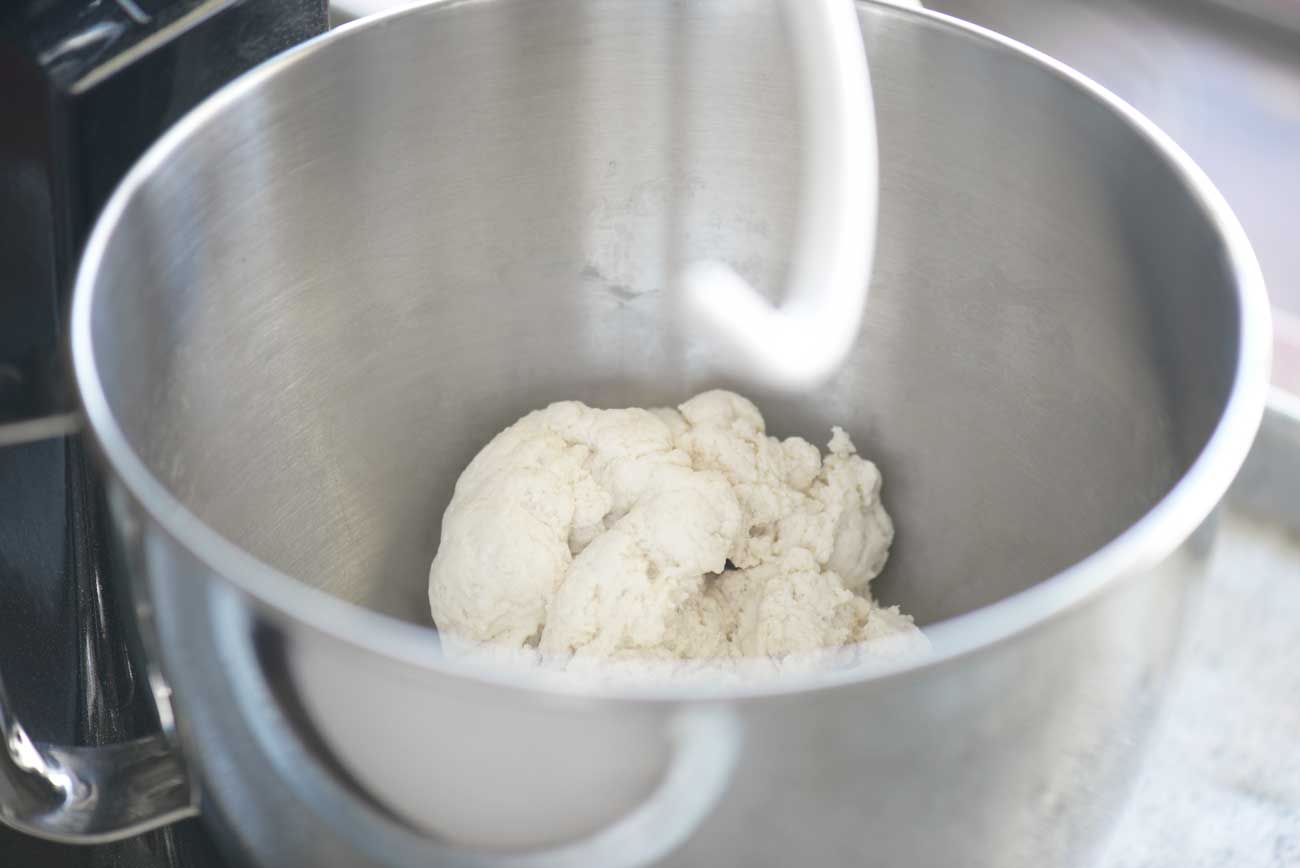 I like to use my stand mixer to mix and knead the two ingredient dough.

You can also use a hand mixer or even a wooden spoon and then a floured surface to mix and knead the dough. 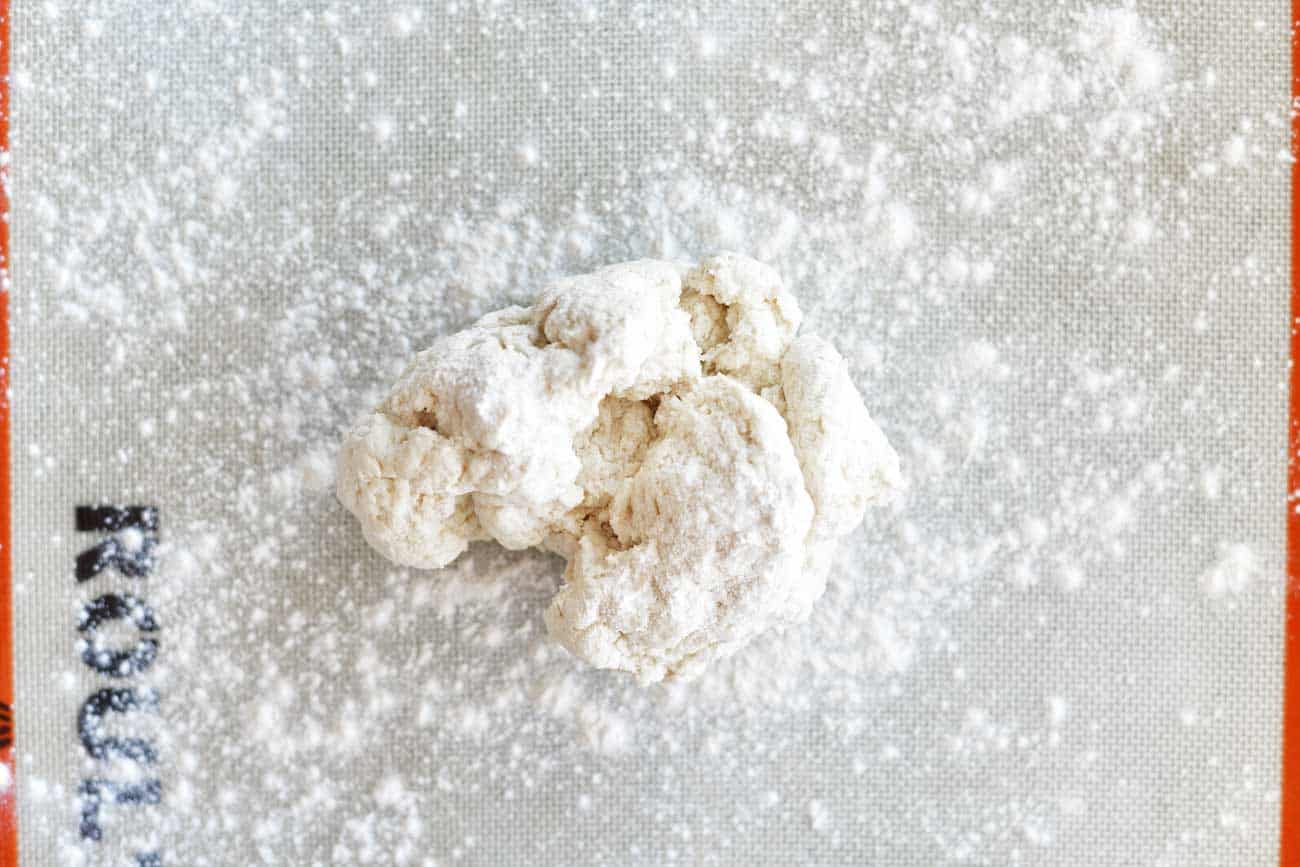 Turn the dough out onto a floured surface such as a silicone mat or cutting board.

Sprinkle the dough with additional flour, so that it won’t stick to the knife and rolling pin, and form the dough into a ball. 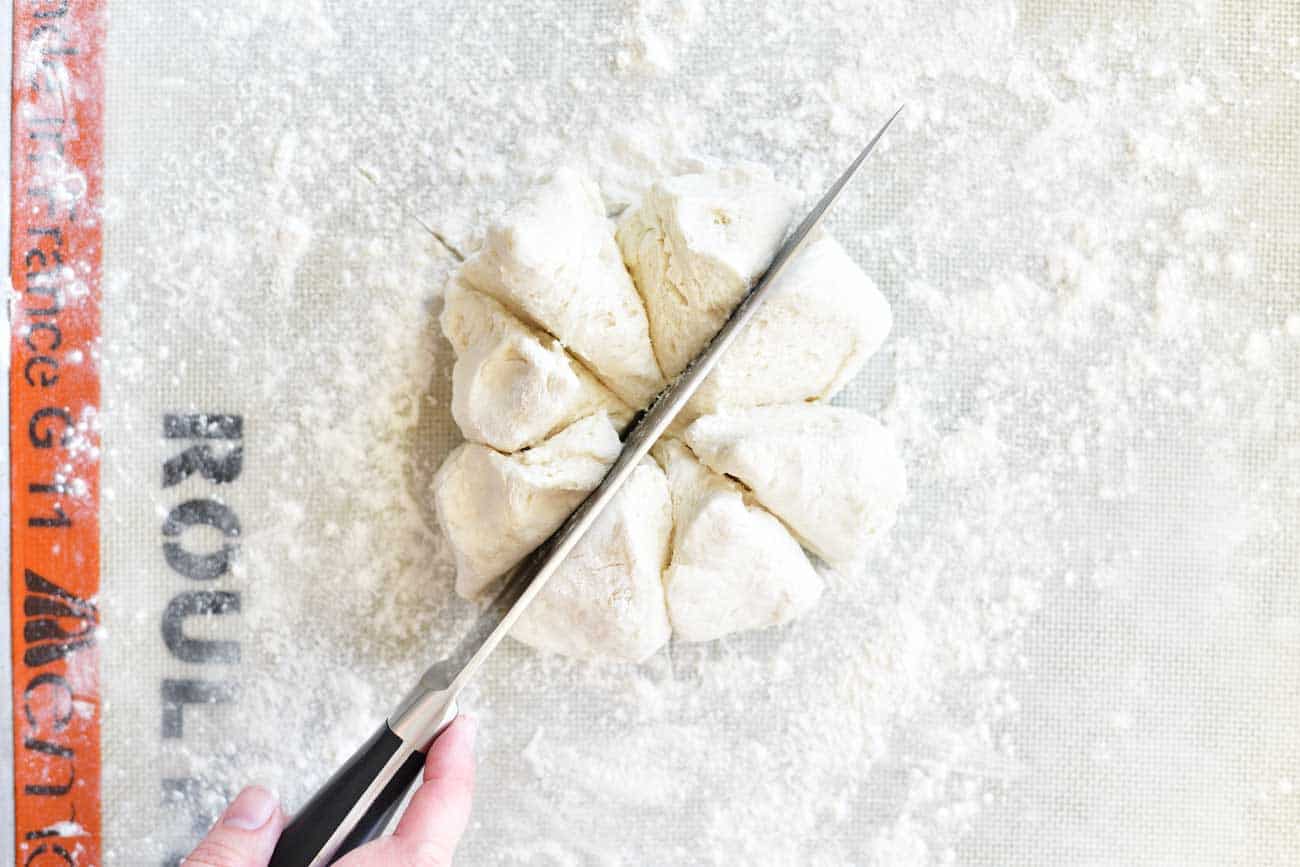 Use a sharp knife to cut the dough into eight pieces. 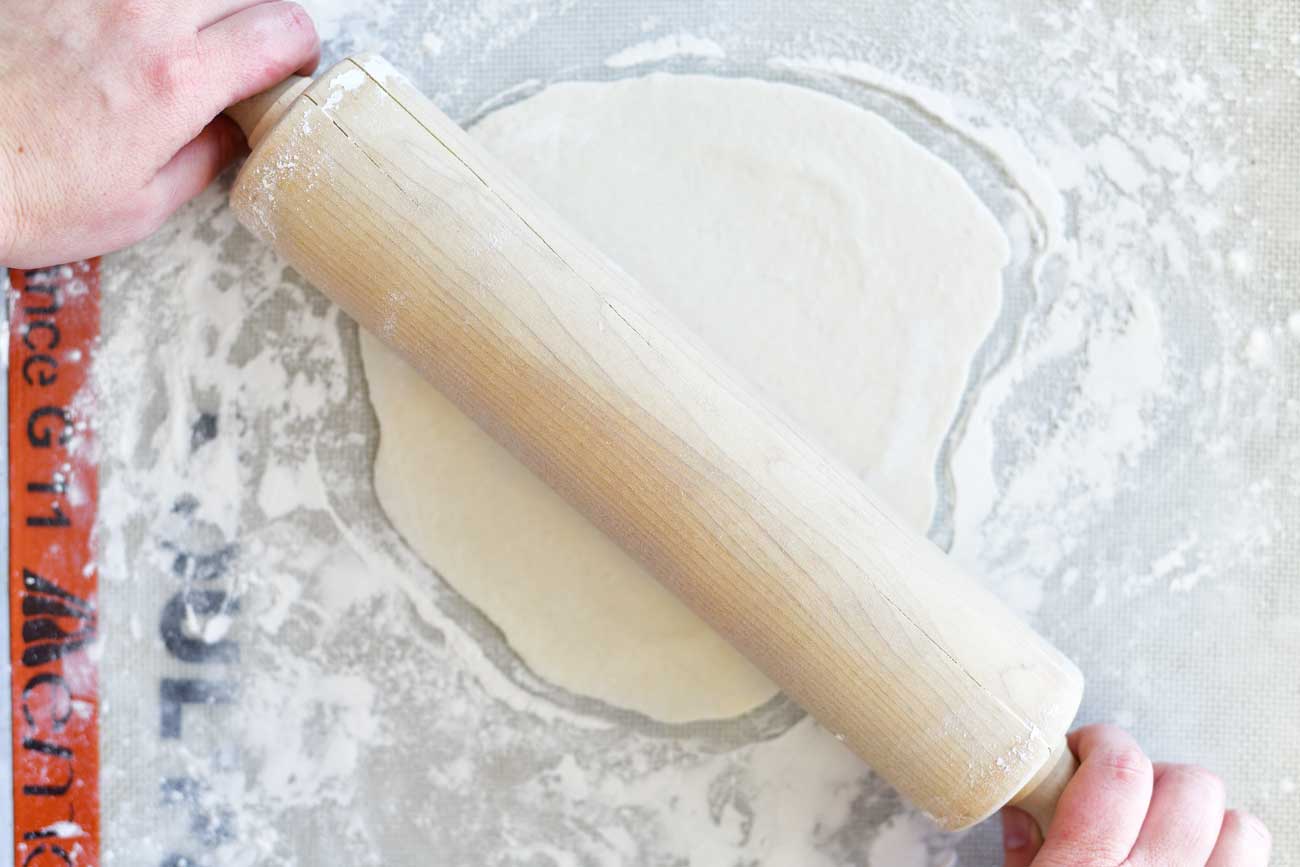 Use a rolling pin to flatten the dough pieces into round(ish) circles. Set aside. 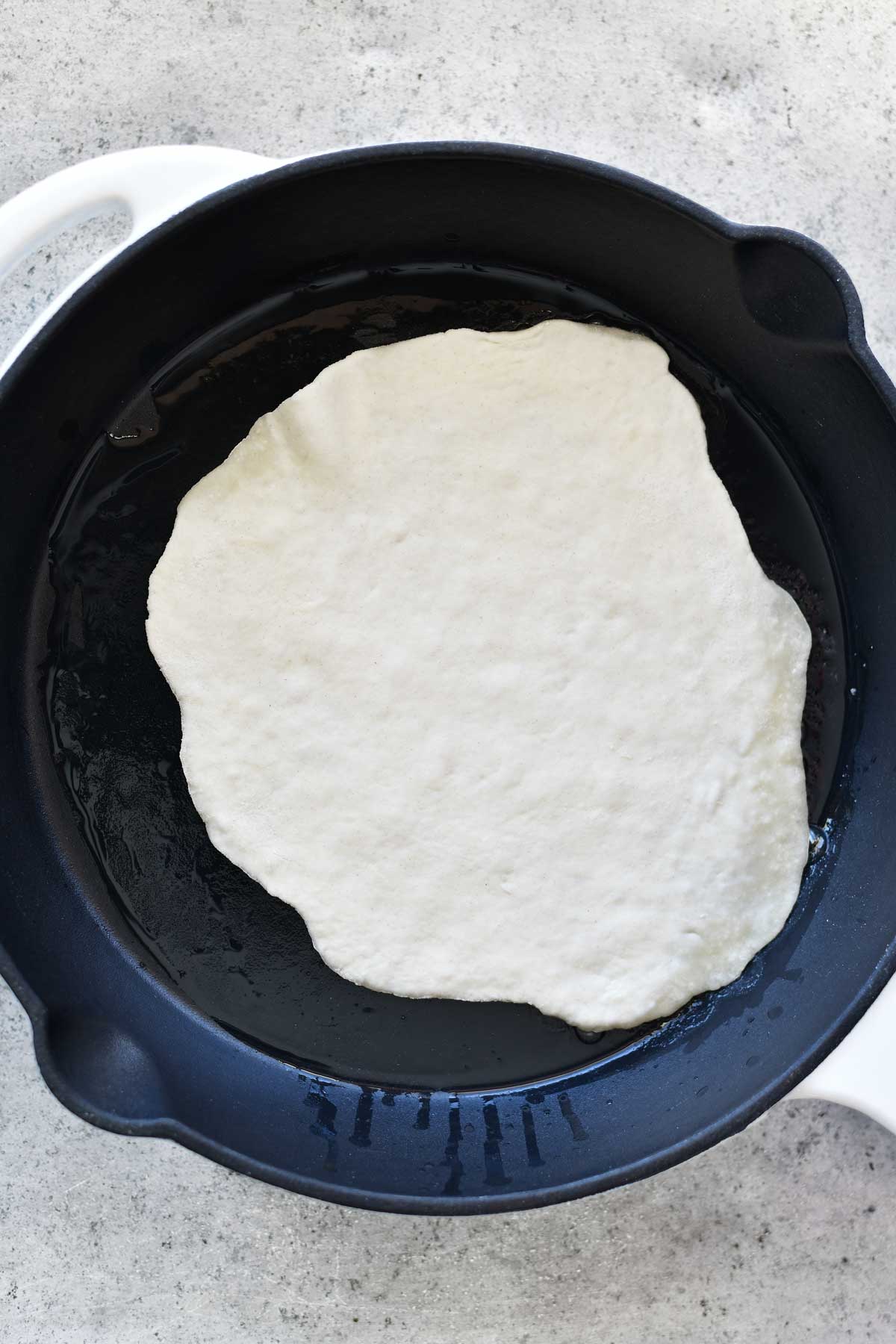 I like to use a cast iron skillet to make this two-ingredient dough naan flatbread but it would work in a regular skillet as well.

Simply grease the hot pan with olive oil and carefully place a circle of dough in the pan. The dough will start to puff up. 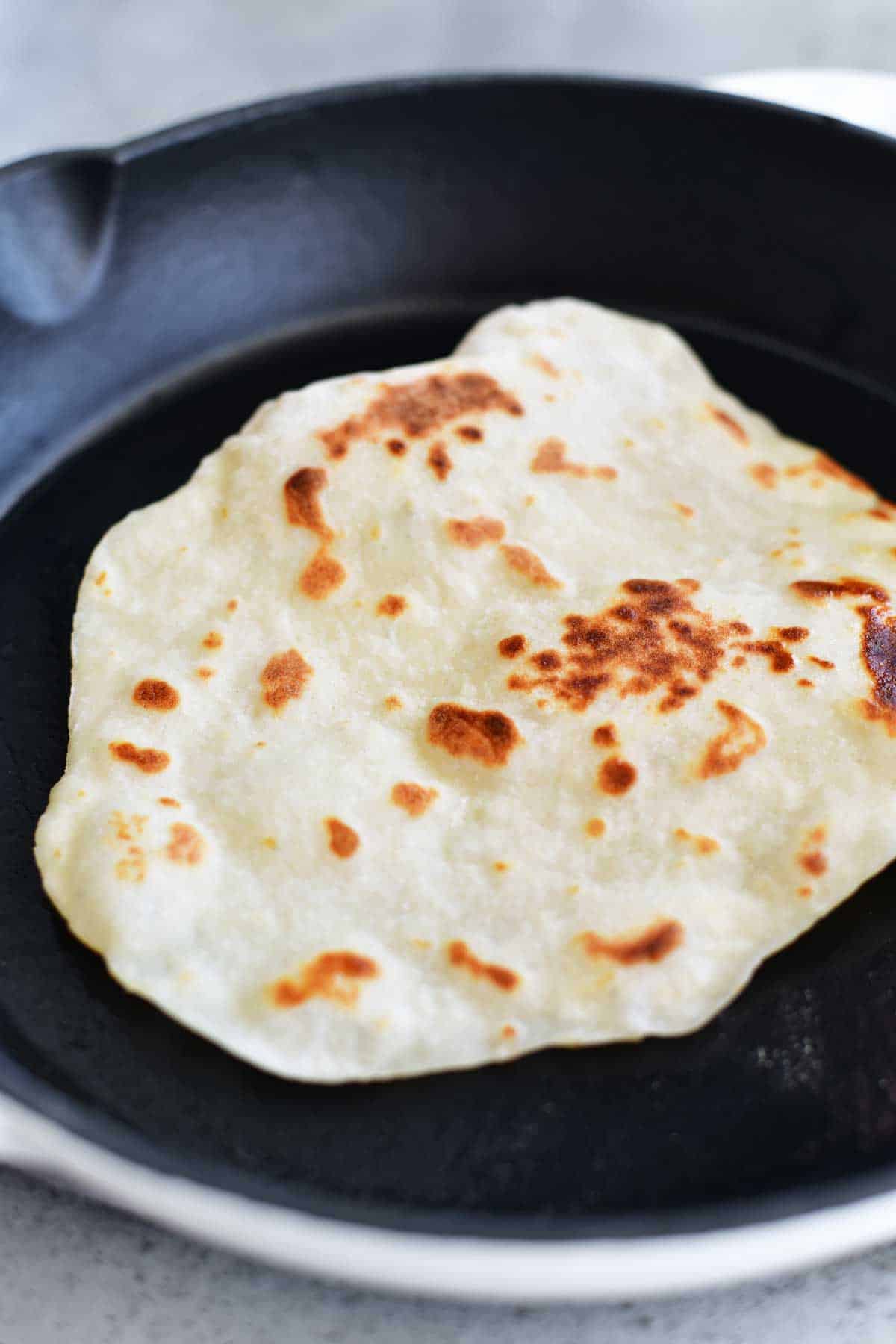 Once the naan flatbread is browned on the bottom, flip it over to the other side can cook. 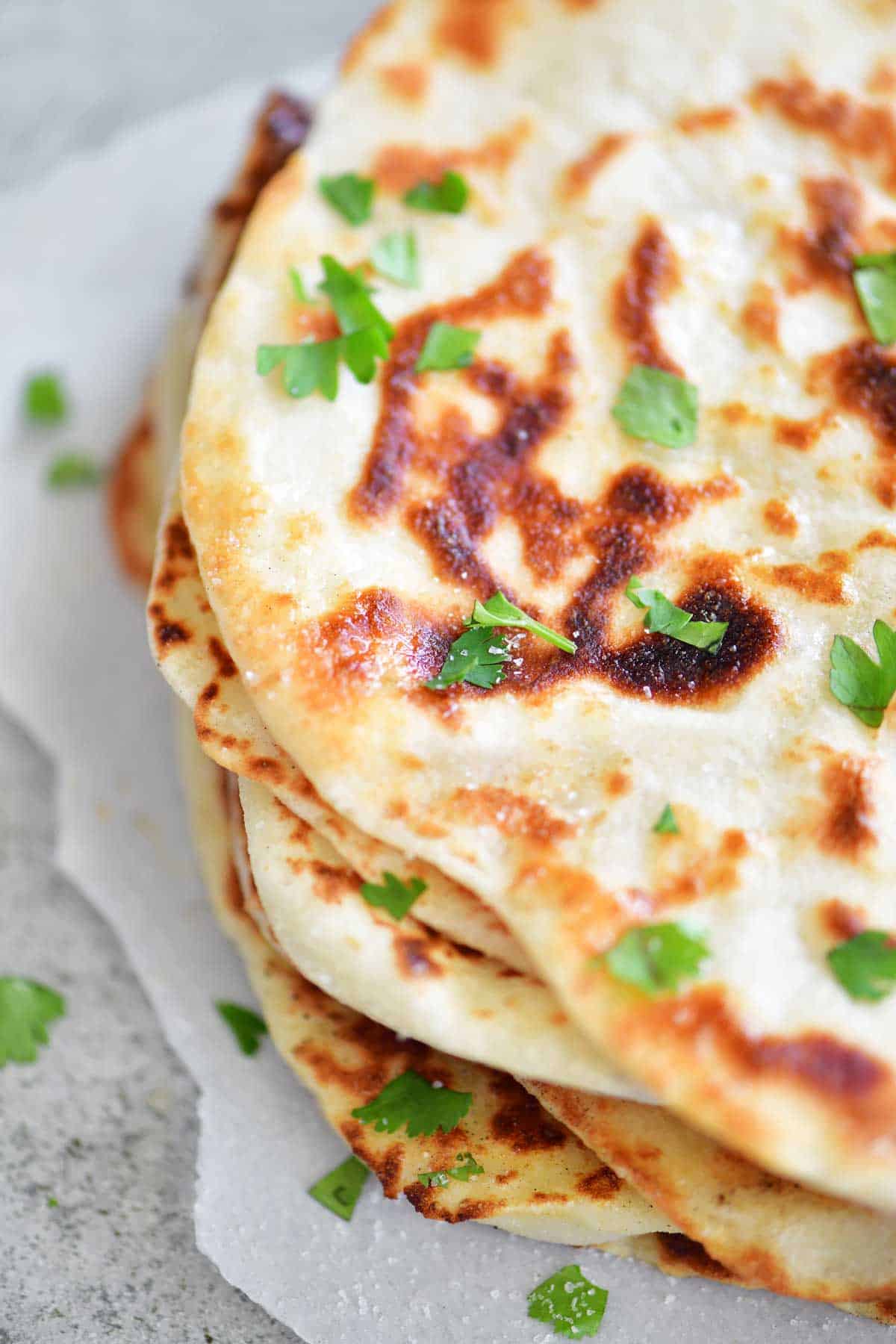 Our favorite way to eat the naan flatbread is while it is still warm brushed with butter and sprinkled with salt (or garlic salt) and chopped cilantro.

If you want to make mini pizzas, top the naan flatbread with pizza sauce, cheese, and meat. Bake at 425˚F until the cheese is melted.

2) What brand of plain Greek yogurt do you suggest? You can use whatever kind is available at your local grocery store. I’ve made two ingredient dough with Fage, Oikos, and the store brand and haven’t noticed a difference.

4) What should I do if the dough is sticky and won’t form a ball? Knead in a little more flour at a time until it is workable.

5) Can I make this two-ingredient dough naan flatbread WITHOUT a stand mixer? Yes! Stir the self-rising flour and Greek yogurt together until combined. Turn it out onto a floured surface and knead until smooth.

6) How can I make this recipe WITHOUT a dough hook? Use the paddle attachment on your mixer to combine the self-rising flour and Greek yogurt. Turn it out onto a floured surface and knead until smooth. 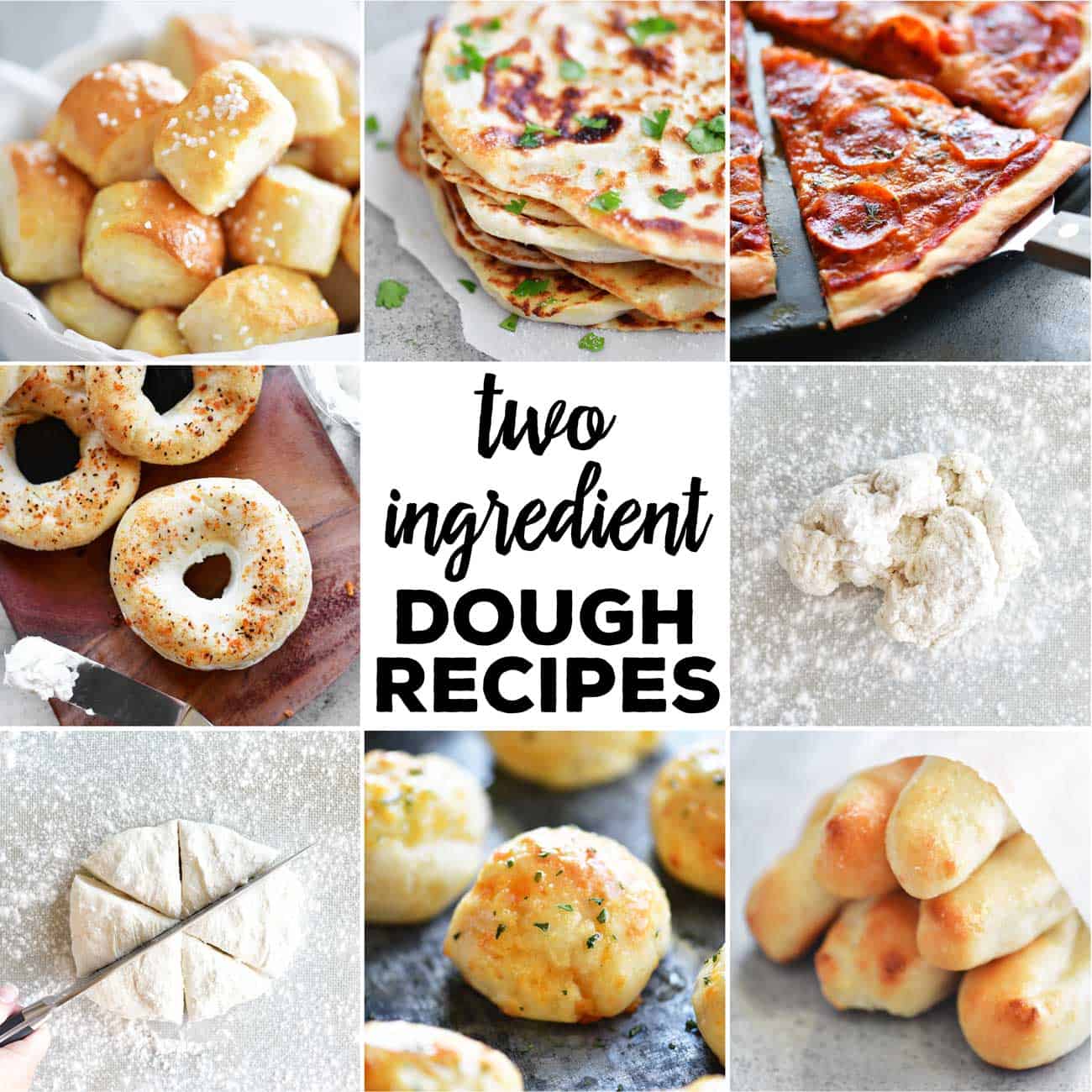 See FAQs in the blog post for additional tips as well as a self-rising flour recipe, if needed. 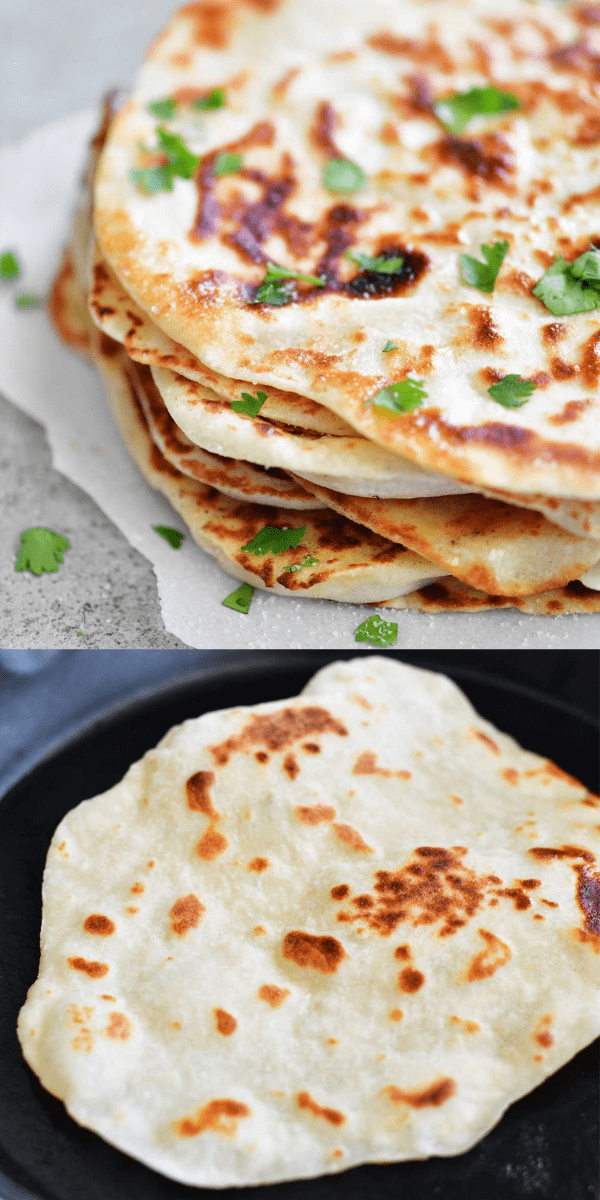