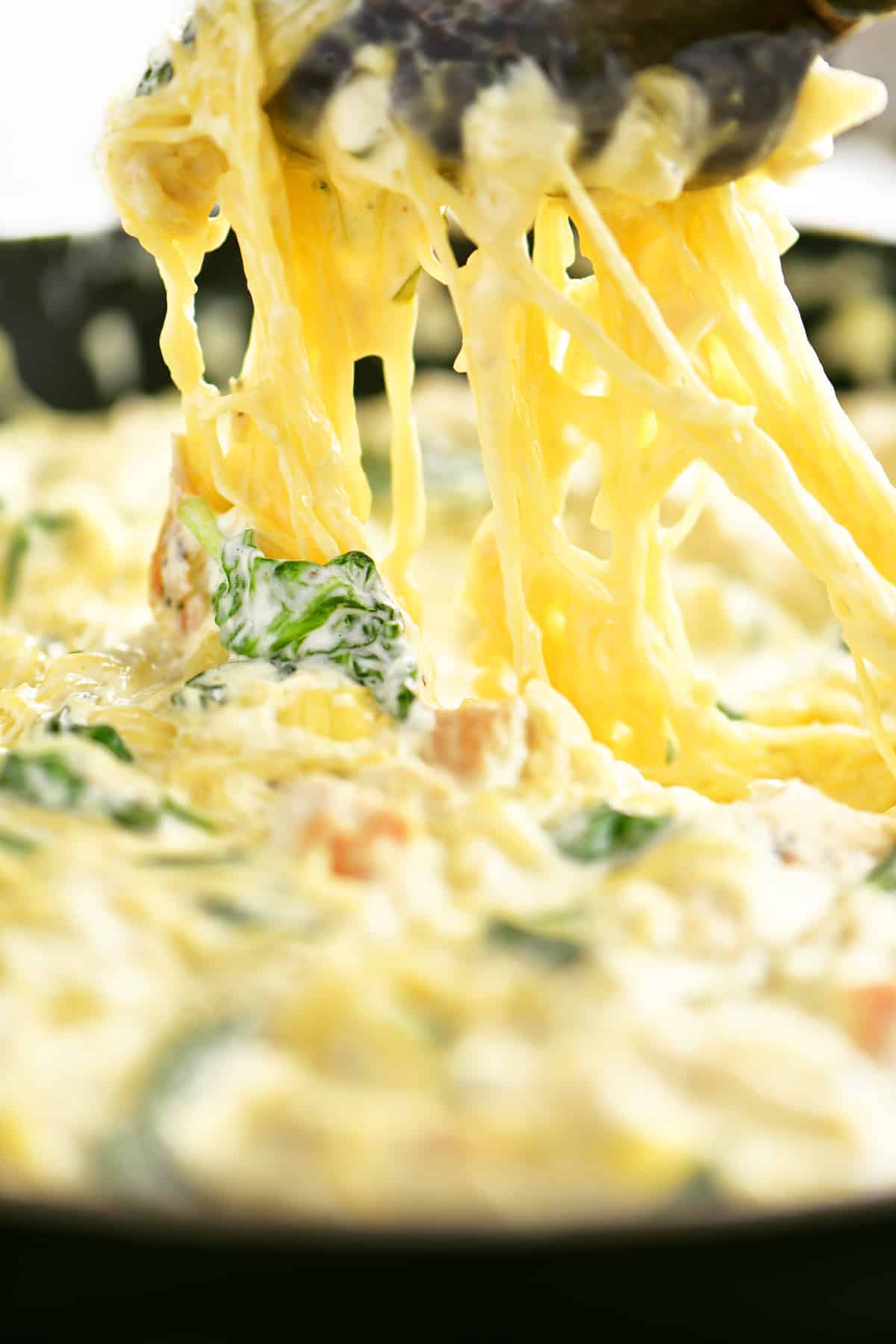 This spinach artichoke spaghetti squash as a sauce that is similar to the chicken alfredo version but it has the addition of the baby spinach and artichoke hearts.

Where is the Spinach Artichoke Spaghetti Squash recipe? In this post, I will share step-by-step instructions with photos for how to make this easy meal, as well as answering FAQs about the recipe and sharing a short video showing the recipe in motion. But you can go directly to the recipe by scrolling down to the bottom of the post.

How To Make Spaghetti Squash 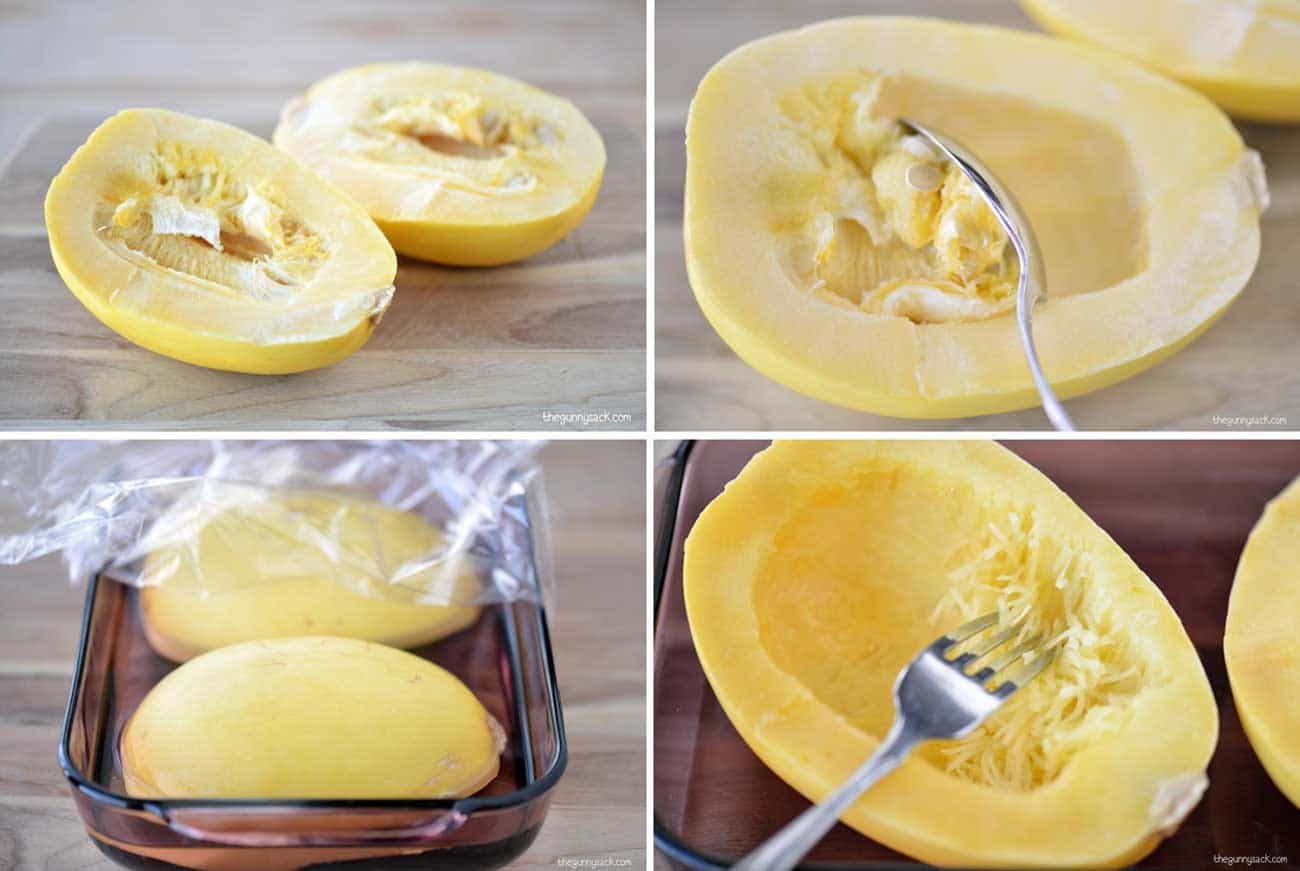 You can find my microwave recipe here: How To Cook Spaghetti Squash In The Microwave

You can find my Instant Pot Spaghetti Squash recipe here.

How To Make Spinach Artichoke Spaghetti Squash with Chicken 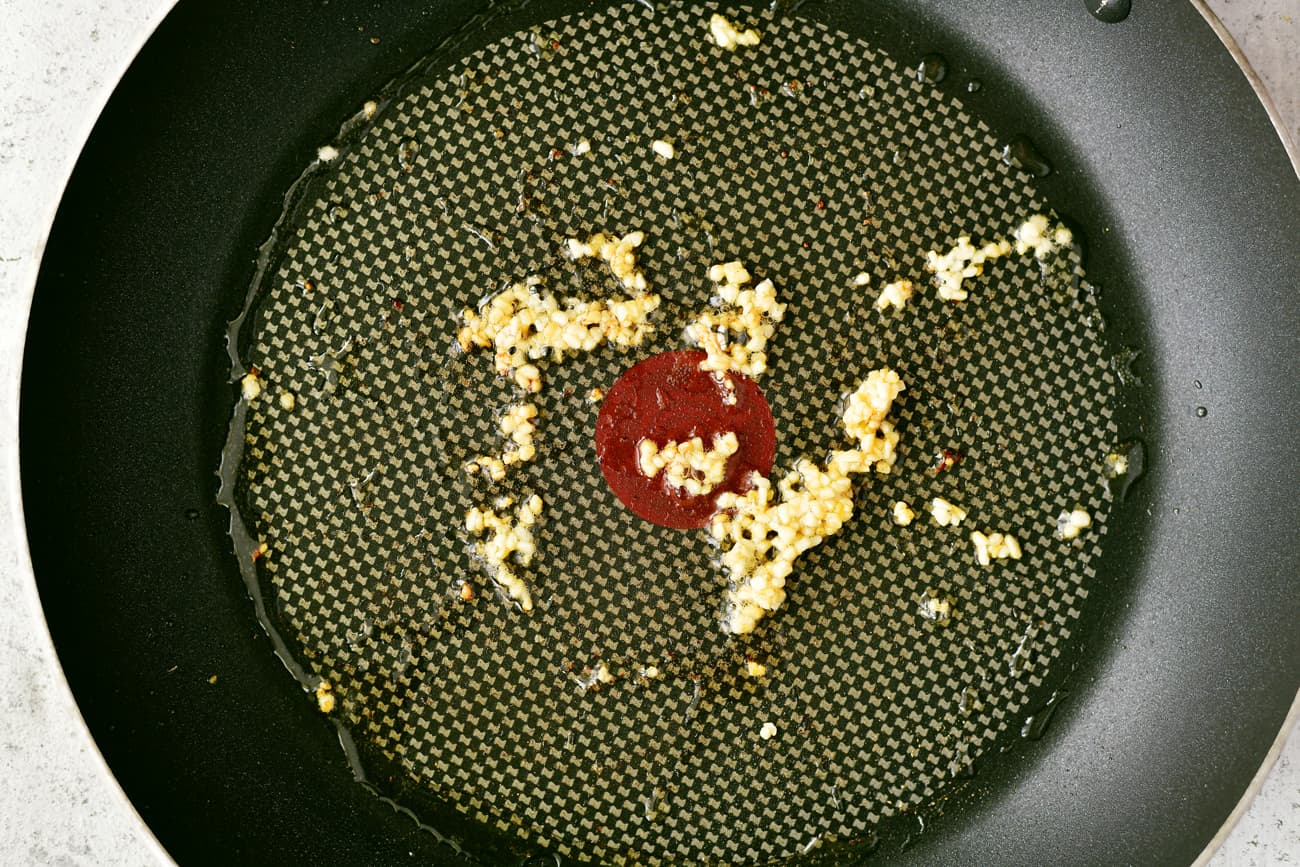 Start by sauteing some minced garlic in olive oil in a large skillet.

For fresh garlic, use four cloves.

I like to buy my garlic already minced, in a jar and ready to be used. If measuring minced garlic, use two teaspoons.

If you prefer to use dried minced garlic or garlic powder, use one teaspoon. 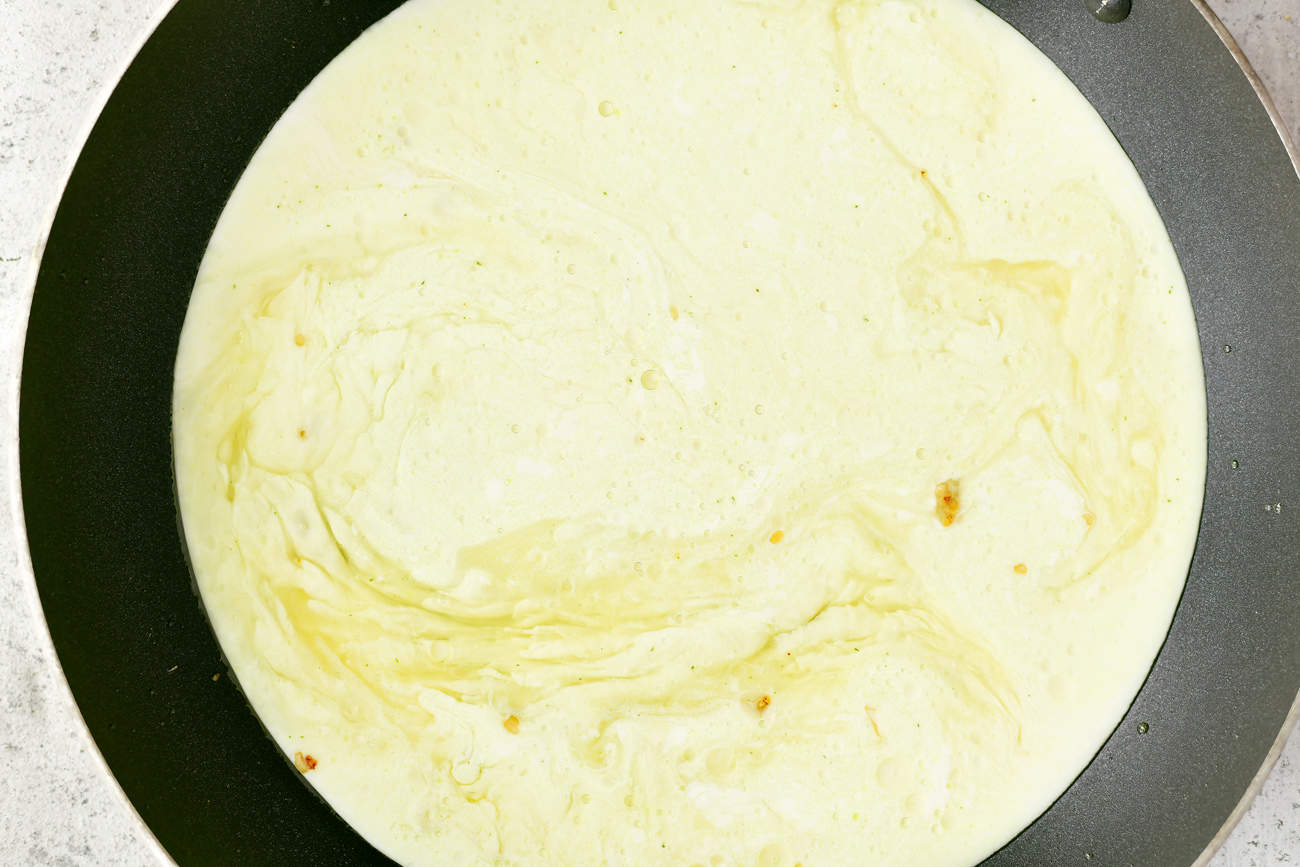 Next, add the chicken broth and half-n-half and bring to a simmer (when you see it start to bubble a little but before it starts a full-on boil).

For those of you from other countries, half-n-half might be known as half cream in your country. It is a mixture of whole milk and light cream.

If you prefer to use heavy cream, that would work as well for this recipe. 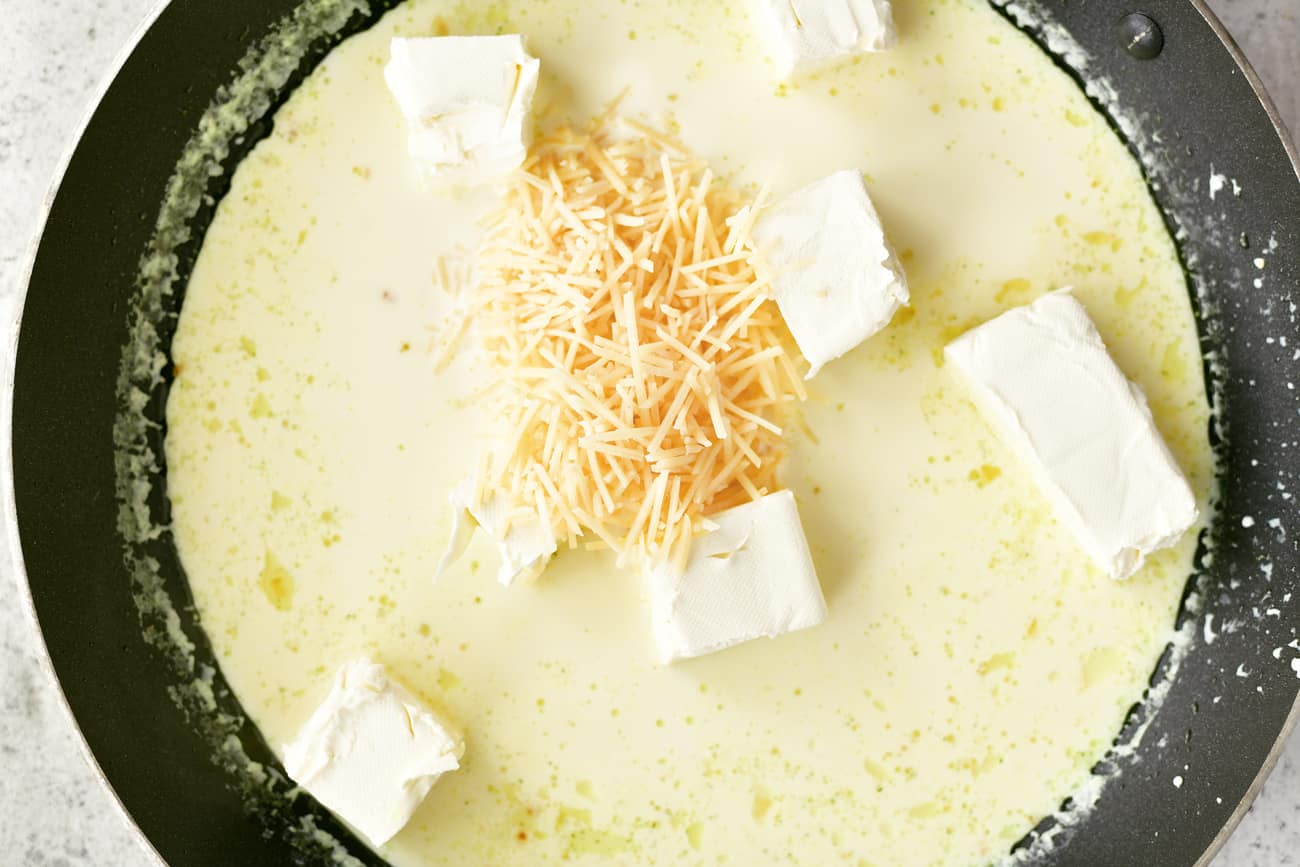 Once the liquids are hot, add the cream cheese and shredded Parmesan cheese. 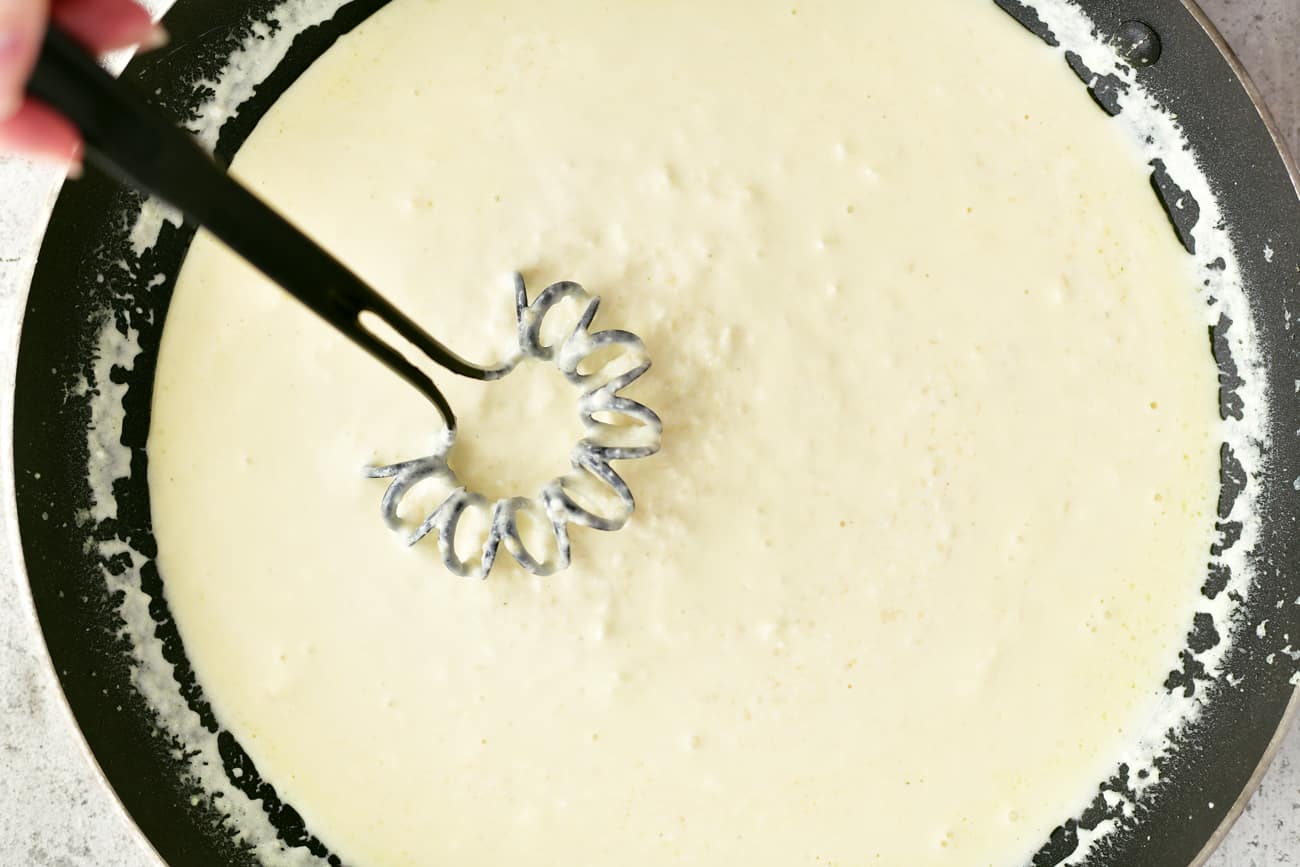 Slowly stir the cheeses until they melt into the liquid. Stir with a nylon or silicone whisk (so that you don’t scratch your non-stick pan) until most of the bigger pieces are gone. 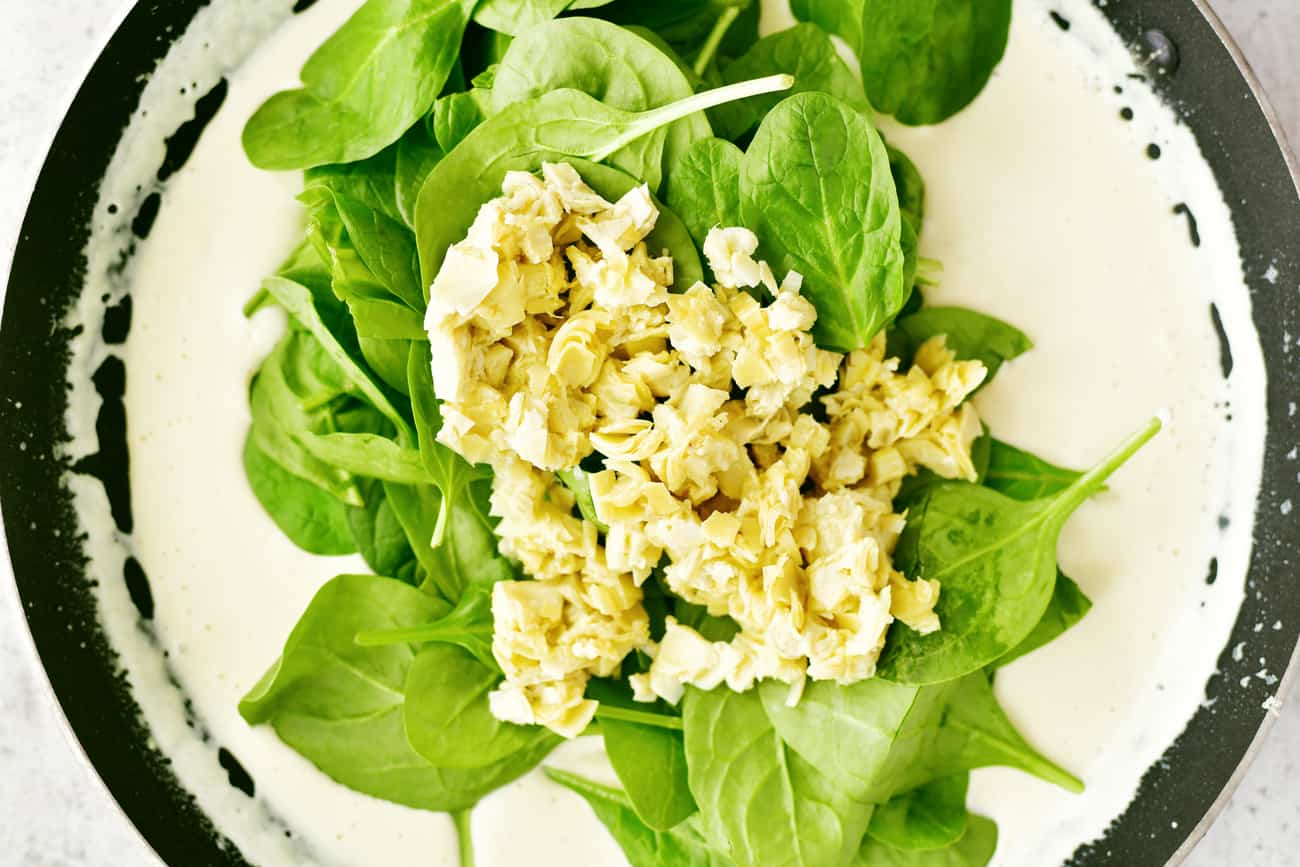 Now that the sauce is ready, add the baby spinach and chopped artichokes.

I used two cups of packed, fresh spinach for this recipe. Feel free to use more if you want!

Also, if you want to use frozen spinach, you’ll only need about 1/4 cup thawed and drained to get two cups of packed, fresh spinach. 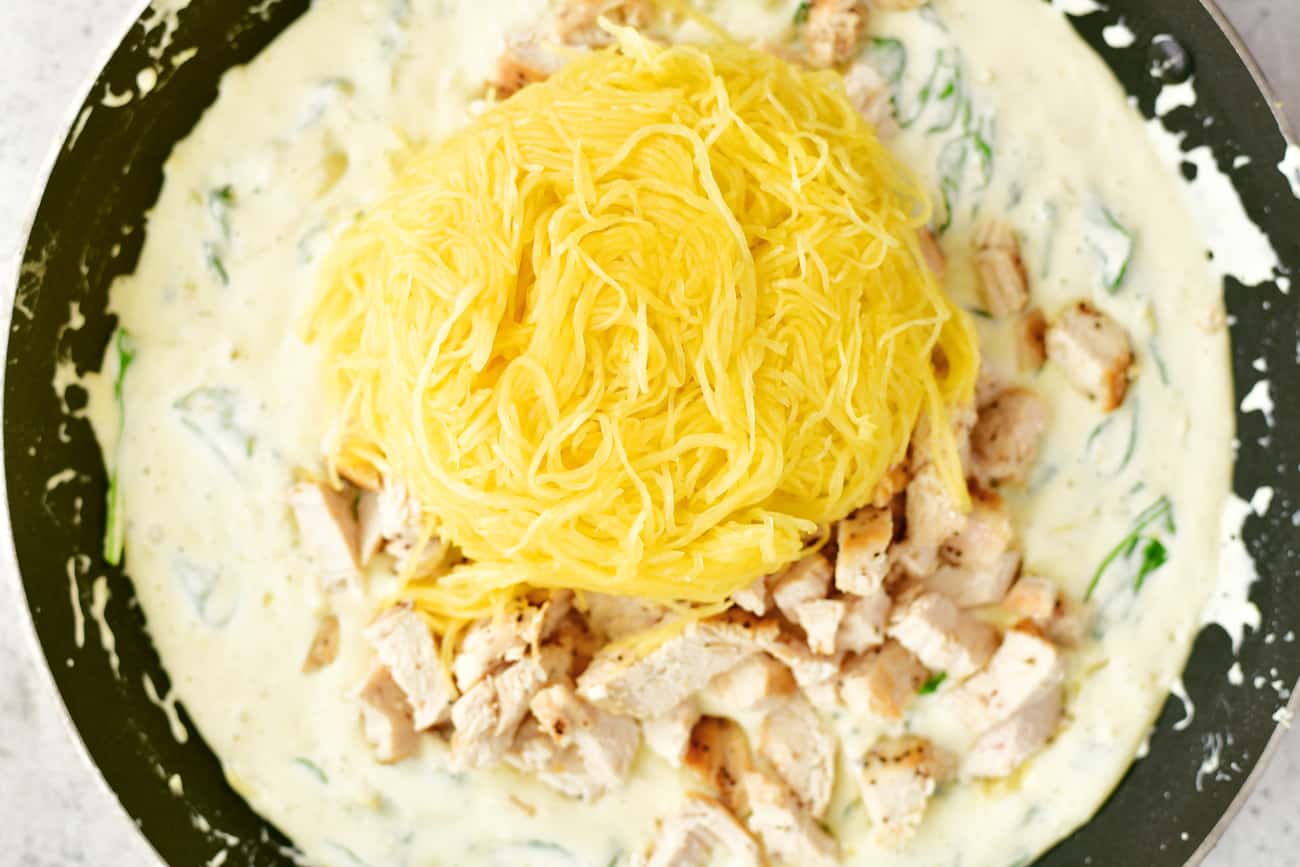 I cooked my chicken on the stovetop for this recipe but you can use grilled chicken, oven baked chicken, rotisserie chicken, or even canned chicken. 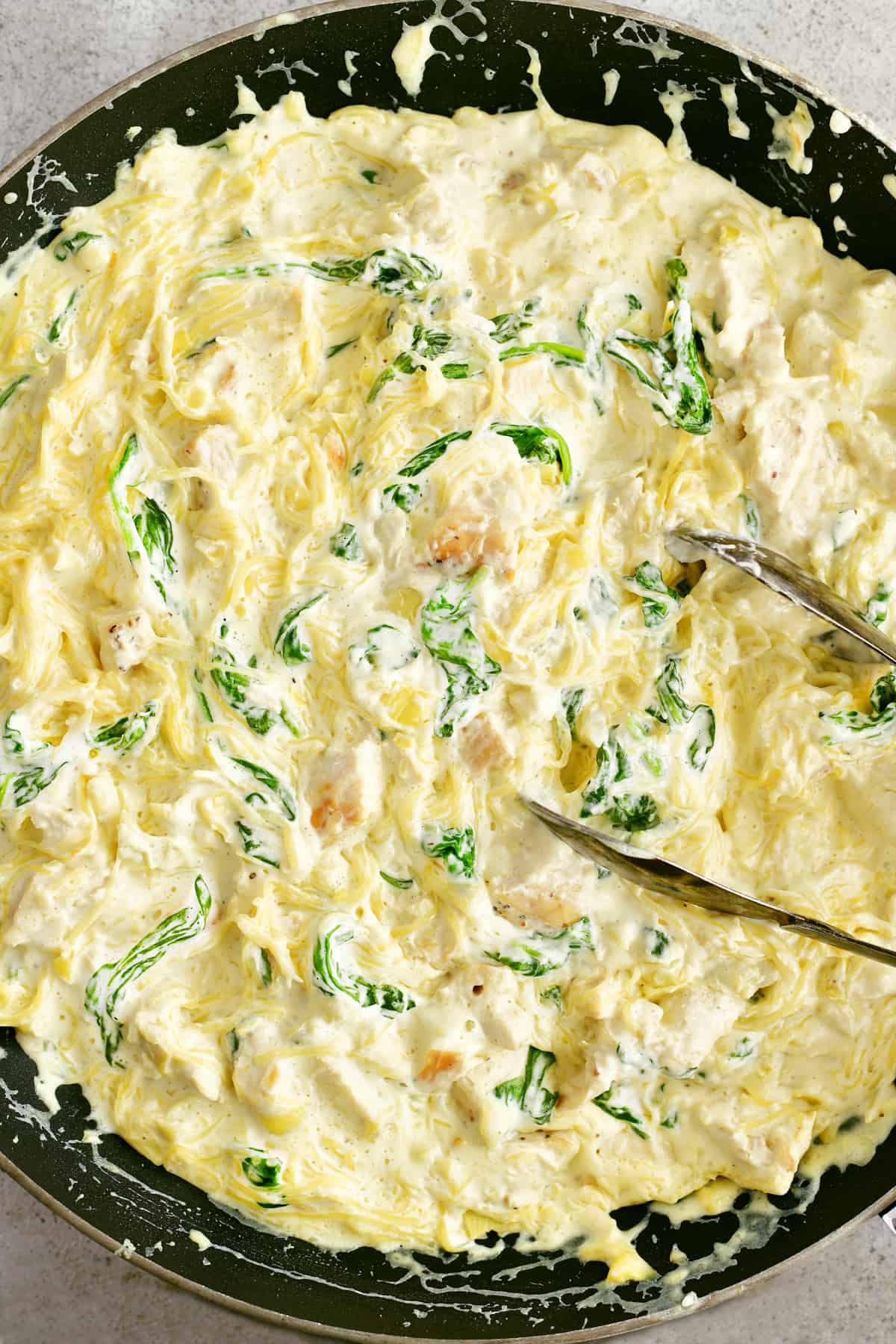 Step Seven: Finish It Off

Season with salt and pepper to taste. Serve with additional shredded Parmesan. 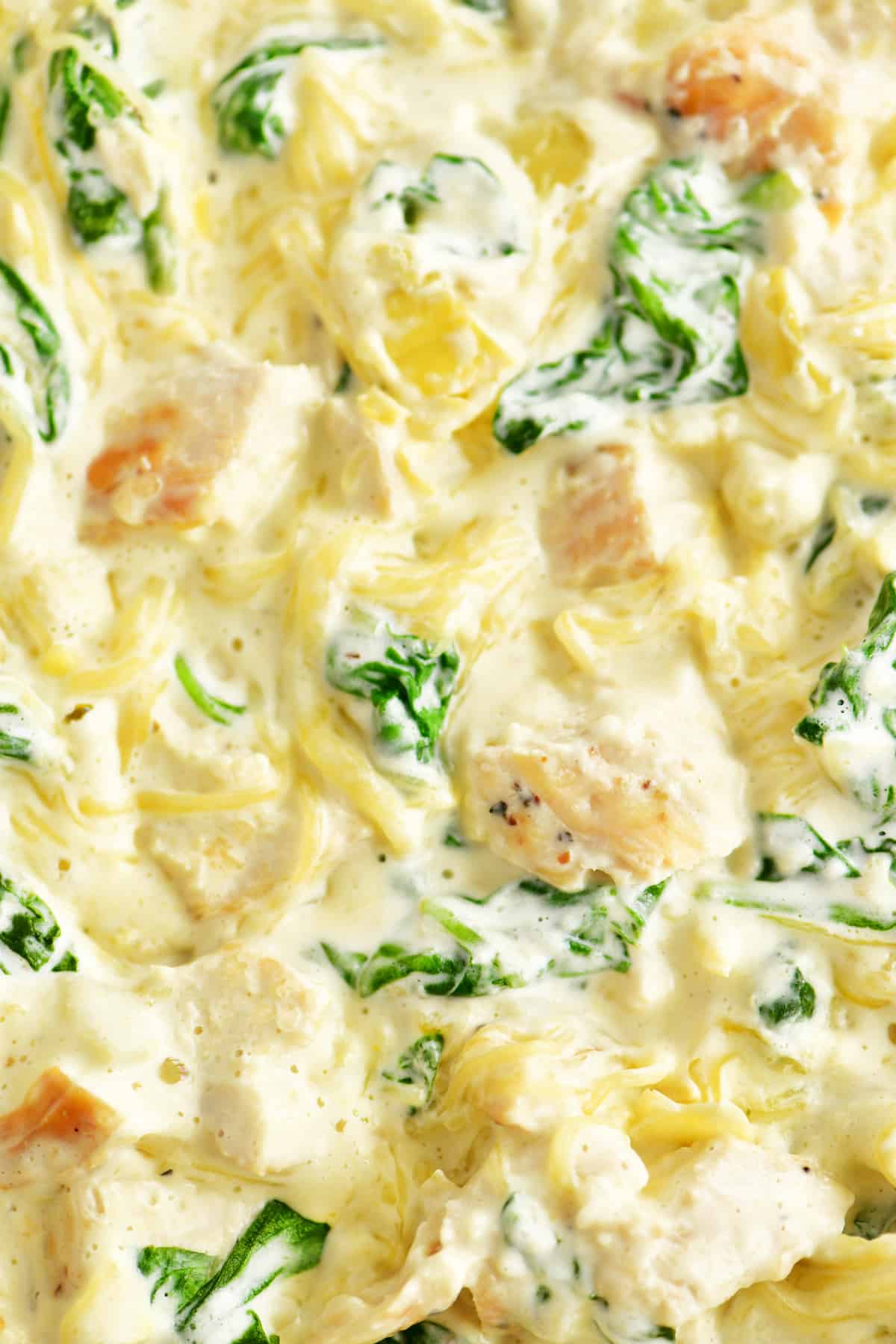 1. How can I lower the fat and/or calories in this recipe? Try making this with fat-free half-n-half, low-fat cream cheese BUT keep in mind that any substitutions may change the flavor and texture of the spinach artichoke spaghetti squash.

2. Is this recipe gluten-free? Yes

3. What about a meatless version? Yes, this spinach artichoke spaghetti squash would still be good without the cubed chicken.

5. We don’t like spaghetti squash. What can we use instead? Use cooked angel hair pasta instead.

6. What else can I add to to the spinach artichoke spaghetti squash? You can add more spinach and cubed chicken. Or feel free to add other vegetables such as steamed broccoli or cauliflower.

7. What should I do with the leftovers? Divide the spinach artichoke spaghetti squash into servings, put them in airtight containers and place in the fridge or freezer for a quick meal for one. 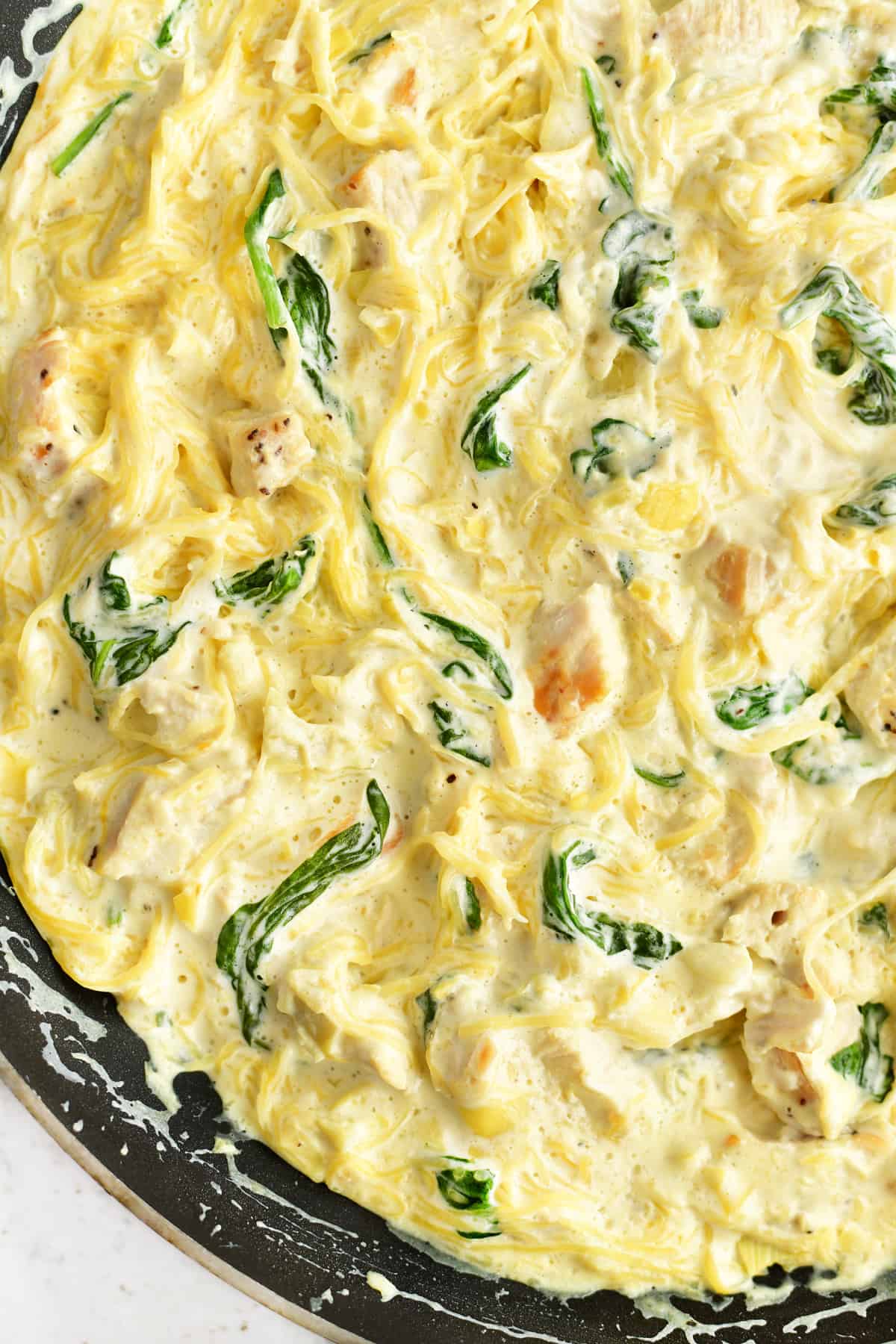 Don’t worry! We’ve got you covered. Try one of the following recipes next.

Spaghetti Squash with Meatballs from The Gunny Sack: Skip the carbs and try this recipe for spaghetti squash with meatballs. This healthy dinner recipe for squash boats is a great way to eat extra vegetables!

See blog post for additional tips and answers to FAQs. 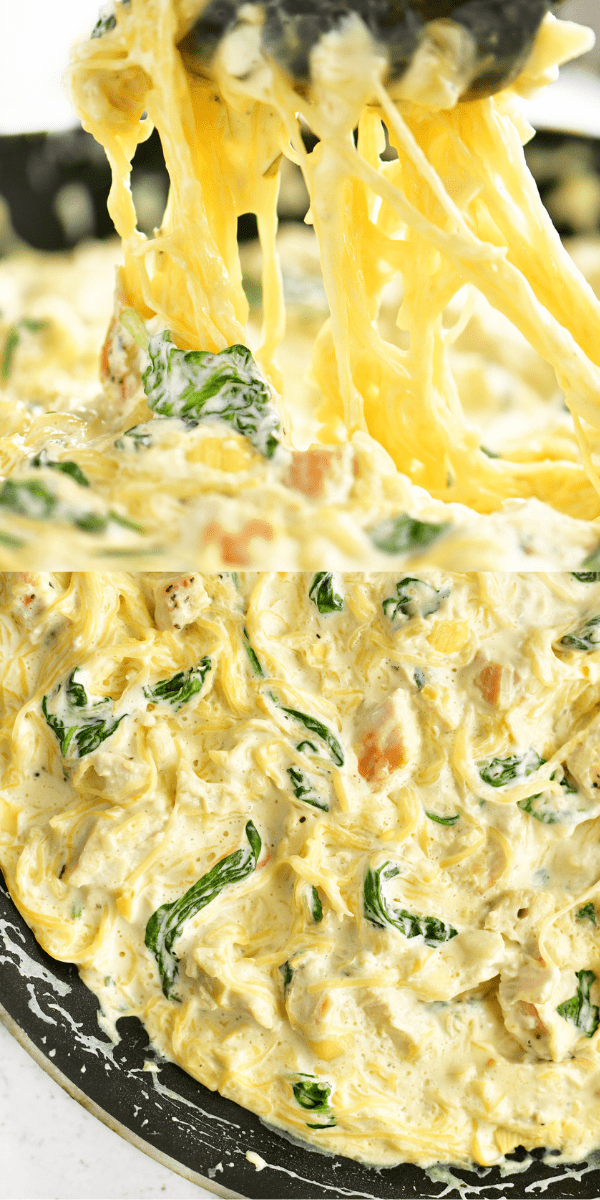