Home » Recipes » Breakfast » How To Cook Bacon In The Oven 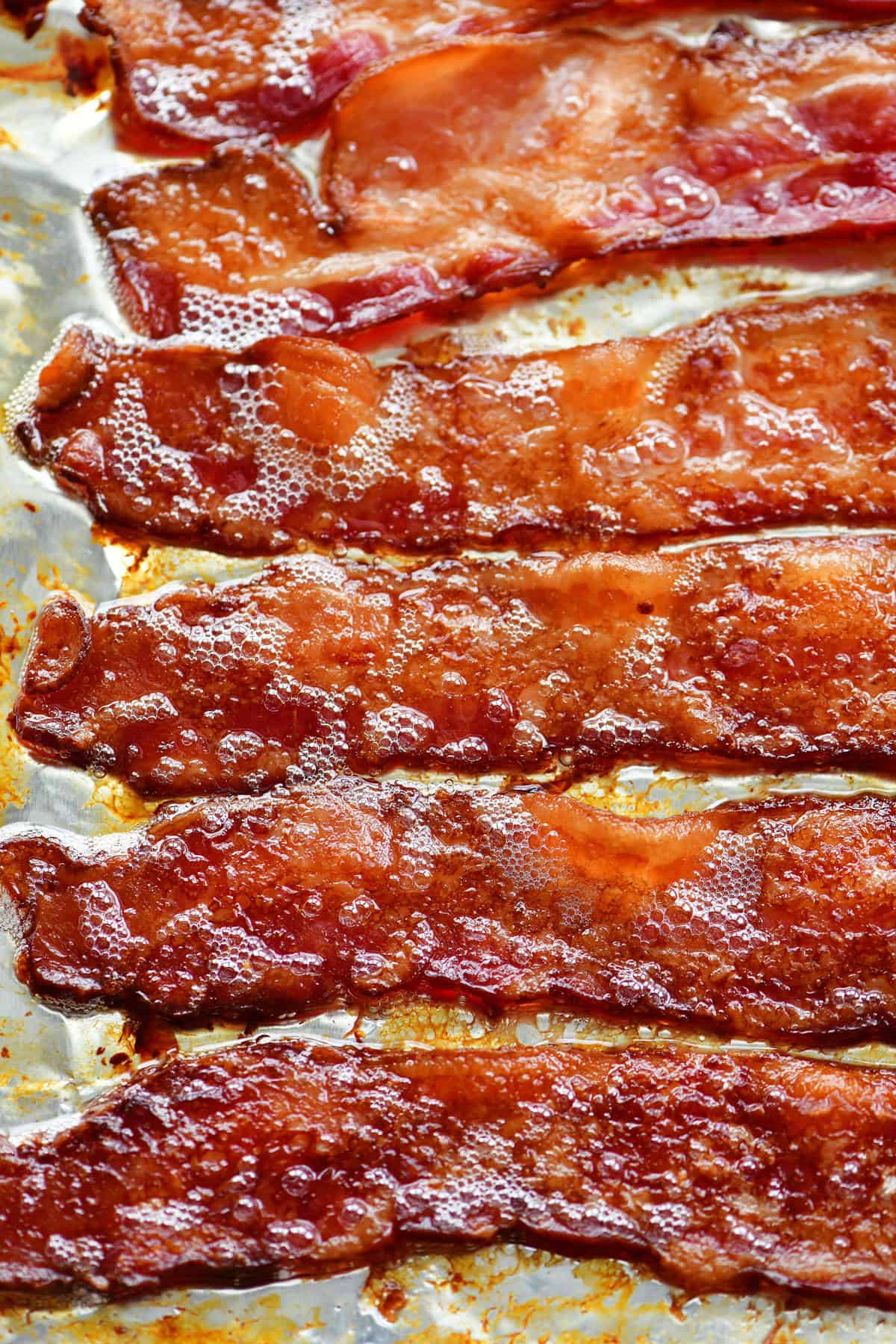 Bacon is on the very short list of my family’s absolute favorite things. We usually have store-bought, fully-baked bacon in the fridge and that works in a pinch but when we want a special treat I cook bacon in the oven.

Oven cooked bacon fries in its own grease like it would in a frying pan but without the big mess. It is perfectly crispy and melt-in-your-mouth delicious!

Where is the recipe for how to cook bacon in the oven? In this post, I will share step-by-step instructions with photos for how to make the bacon, as well as answering FAQs about the recipe and sharing a short video showing the recipe in motion. But you can go directly to the recipe by scrolling down to the bottom of the post.

What Bacon Should I Buy 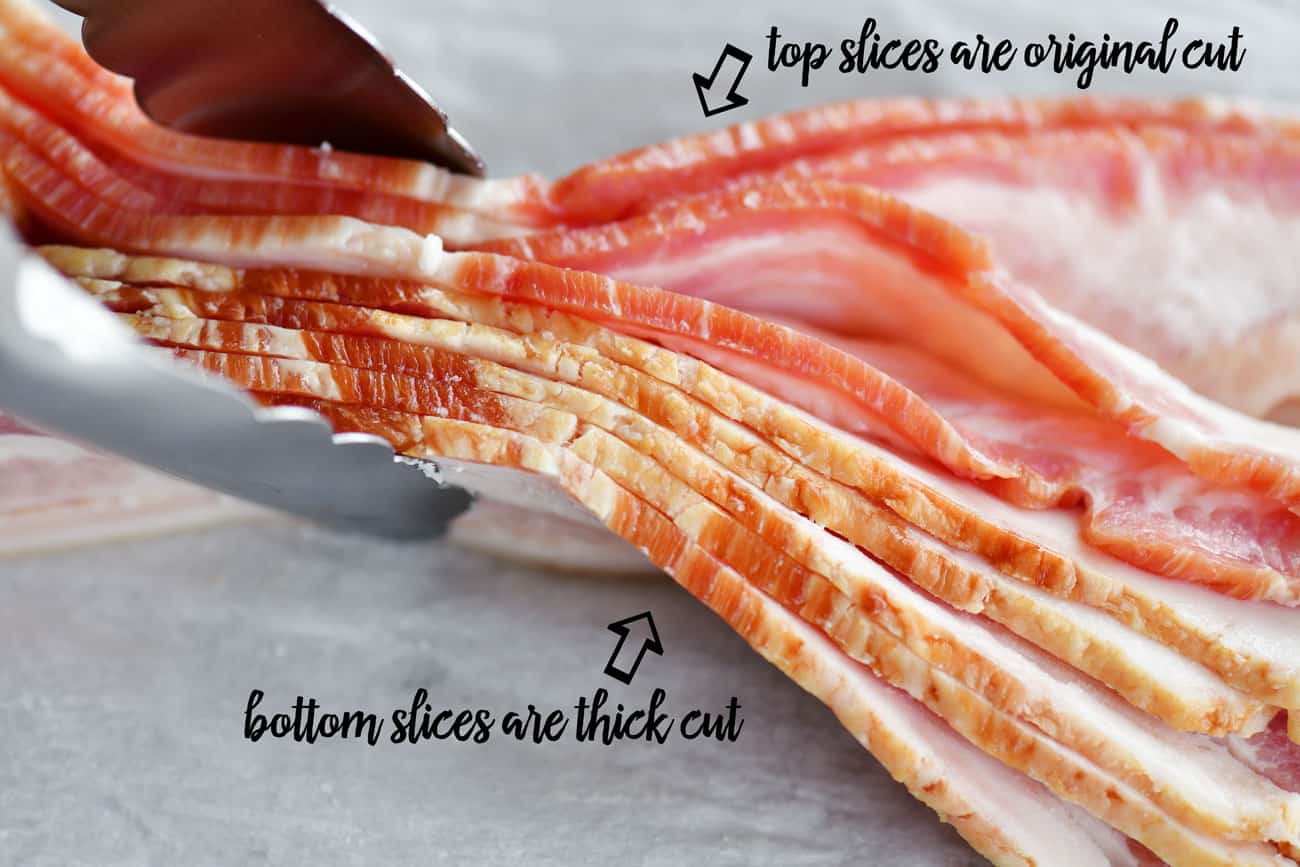 Our local grocery stores typically sell two cuts of bacon: original or classic cut (thin) and thick cut. The class cut or thin cut is the most common bacon choice.

There are about 18 slices of original cut bacon in a 16 oz package and only about 12 slices in the 16 oz package of thick cut bacon. Both cuts are delicious but we prefer the thick cut because you get something more substantial to bite into.

Traditionally cured bacon is cured with salt and sodium nitrates. The nitrates help to preserve the color and flavor as well as extend the shelf life. But there is concern that high consumption of nitrates could increase your risk of gastric cancer.

Uncured bacon is still cured (even though the package may say uncured) but it is done differently. Sea salt and natural nitrates from celery are used to cure it. From what I’ve read celery nitrates may not be any better for us than sodium nitrates.

Pork bacon comes from the belly of the pig. Turkey bacon is a combination of white meat, dark meat and added flavors to make it taste like bacon. Neither one is healthy and my family prefers the taste and texture of pork bacon.

How To Cook Bacon In The Oven 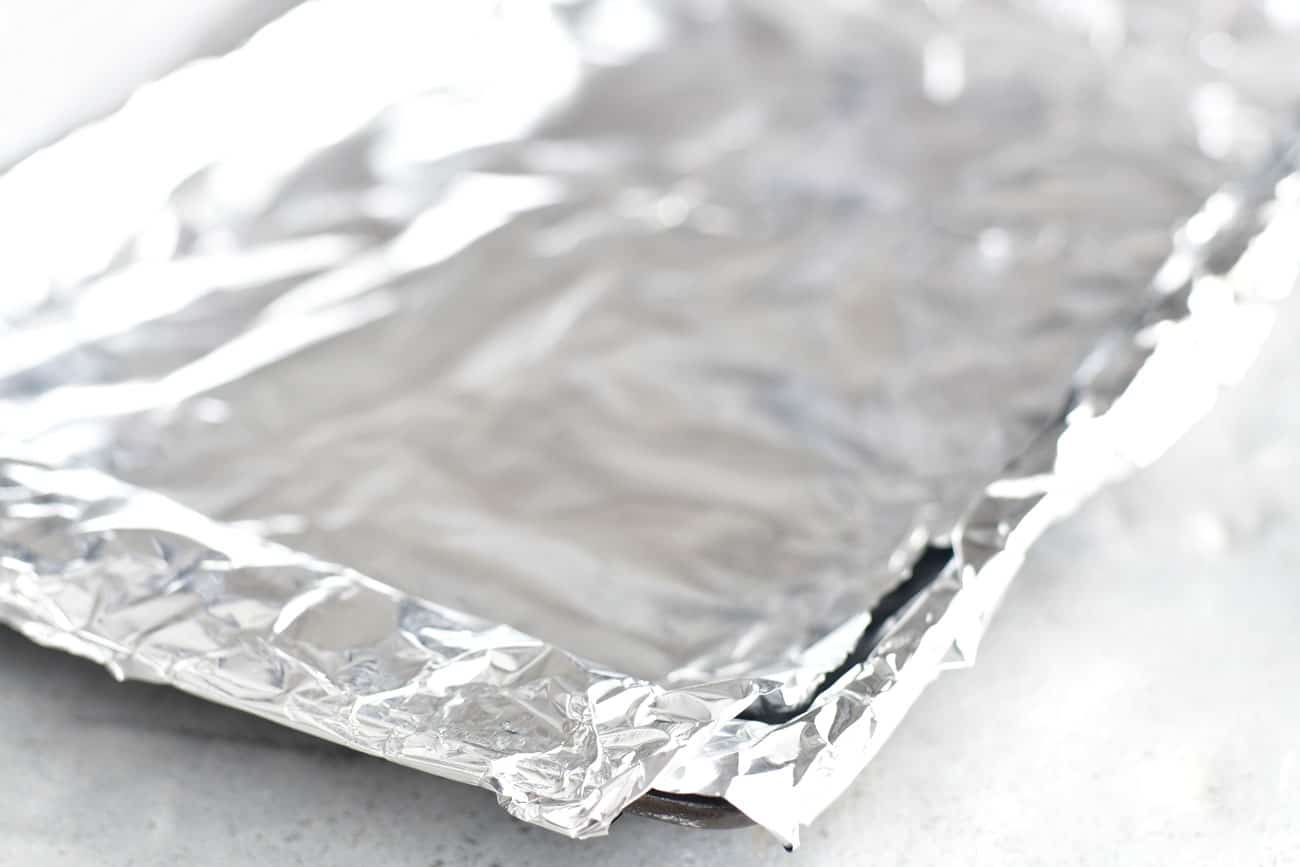 The answer for how to cook bacon in the oven starts with thinking about to the cleanup. Cleaning up bacon grease is the worst part of cooking bacon no matter what method you use. It is dangerously hot right after cooking and gets thick and gloopy once it cools. The bacon grease is smelly and there isn’t any good place to dispose of it.

So, my easy cleanup tip when cooking bacon in the oven is to line the pan with a few sheets of heavy-duty foil! After the cooked bacon has been removed from the pan, allow the bacon grease to cool and solidify. Then remove the grease covered foil from the pan and simply throw it in the garbage. 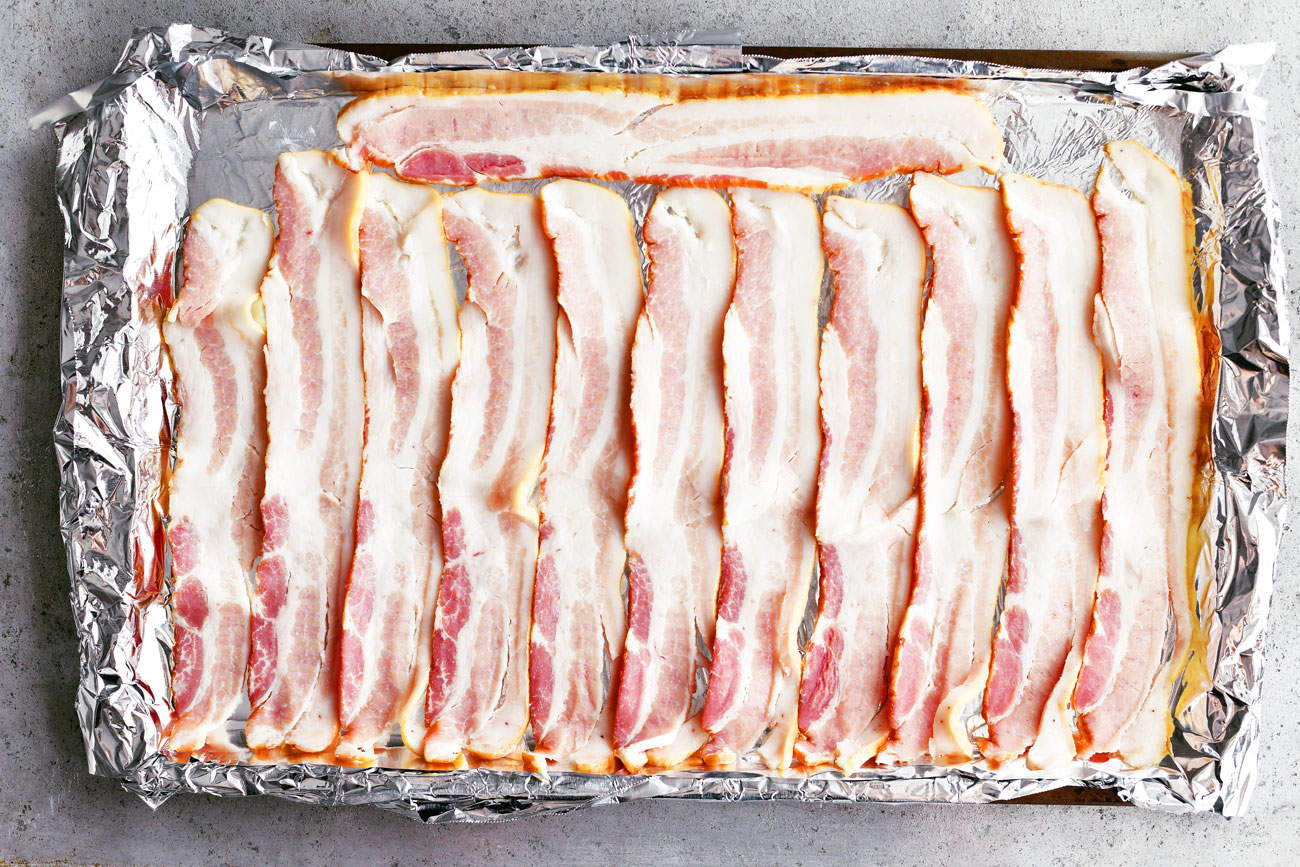 When filling the pan with bacon, add as many slices as you can. It is okay if the bacon slices are touching since they will shrink.

My pan only allows me to line up eleven slices and the package has twelve slices. So to fit the last slice I wrinkle up the eleven slices a little and stick the twelfth slice along the edge.

Cook the bacon in the oven at 425˚F for 15-35 minutes, depending on the thickness of your bacon and your desired crispiness. You can flip the bacon over halfway through cooking to get it evenly crispy on both sides.

Remove from the oven and transfer the bacon to a paper towel covered plate to drain.

How Long Should You Cook Bacon In The Oven?

How long bacon should be cooked in the oven depends entirely on how well you like your bacon cooked. If you ever want to have a friendly argument with a group of people start discussing the “right” way to cook bacon.

The fantastic thing about cooking bacon in the oven is that it allows you to remove it when it gets to that perfect crispiness you desire! Lots of recipes say to cook bacon for 15-20 minutes, yet we bake thick cut bacon for closer to 40 minutes in our oven.

After putting the bacon in the oven, set the time for 12 minutes for thin cut bacon, 15 minutes for medium cut bacon and 20 minutes and check it to see what you think. Use tongs to flip the bacon over if desired (flipping the bacon halfway through cooking allows it to get evenly crispy on both sides) and continue cooking it until it is as crispy as you want it checking it every 5 or 10 minutes.

Thinner cuts of bacon will take less time than thicker cuts. Also, keep in mind that ovens vary and the kind of pan you use can make a difference in how long it takes. 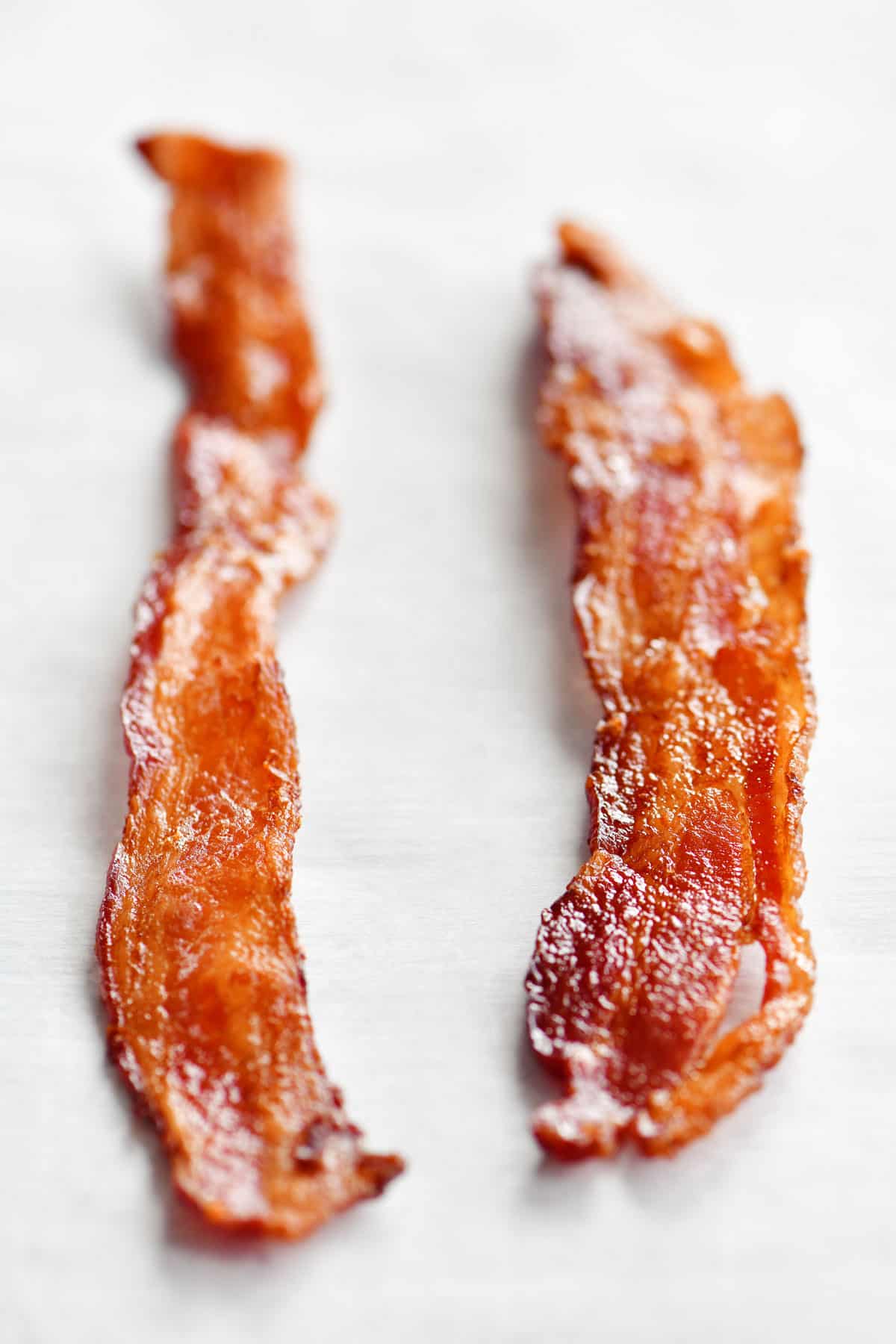 After sharing how to cook bacon in the oven, I wanted to show you a side-by-side look at the difference between the two cuts of oven fried bacon. The slice of bacon on the left is the original cut bacon and the slice on the right is the thick cut bacon.

As you can see, the original cut is thinner in width and thickness but longer in length. The thick cut bacon is wider and thicker but a little shorter.

They are both good but the thickness of the thick cut bacon means there is more fried bacon goodness. My husband calls it candied bacon (even though there is no added sugar involved) and says that the best way to describe it is that it melts in your mouth! 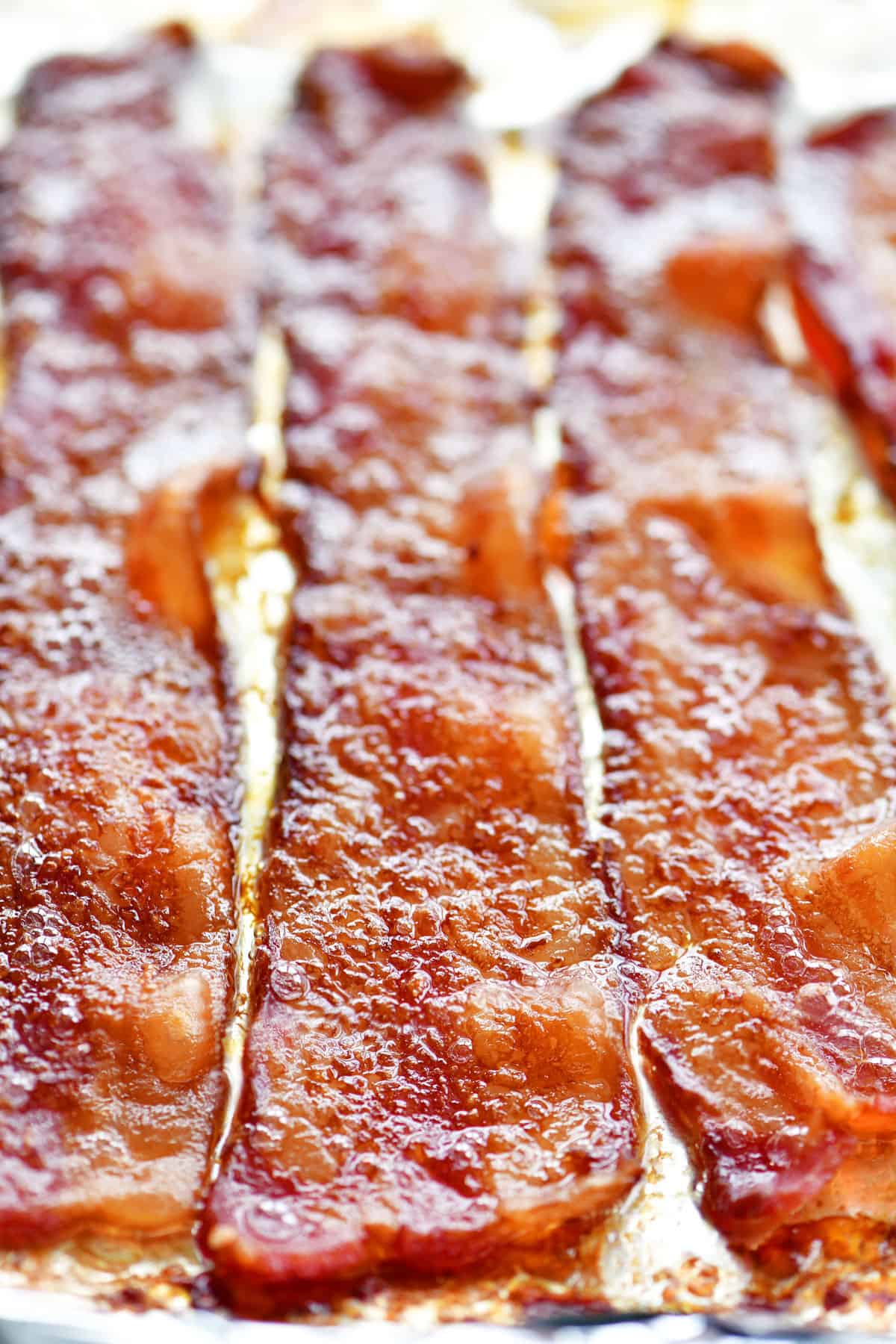 FAQs About How To Cook Bacon In The Oven

1. Does bacon splatter in the oven? When you cook bacon in the oven, it doesn’t splatter all over like frying it in a pan does. It just sizzles and bubbles in its own juices.

2. How do you prepare bacon in advance? Oven cooked bacon is my favorite way of preparing bacon in advance! You cook a whole pound at once and prepare other dishes while it is cooking.

3. How can I cook the bacon on a rack in the oven? Prepare the rimmed baking sheet by lining it with foil. Add a baking rack to the pan and line the bacon up on the rack. Bake at 425˚F for 15-20 minutes or until desired crispiness.

Want Recipes That Use Bacon? Try One Of These:

Bacon Crusted Mozzarella Sticks have cheese on the inside with a crispy bacon outside. They are the ultimate party food; an appetizer everyone will love.

This Bacon Egg Cheese Bagel Sandwich meal prep recipe give you breakfast for the week! Bake muffin tin scrambled eggs and store them in the fridge. For breakfast, warm the baked scrambled eggs in the microwave, add to a toasted bagel with cheese and bacon.

This Loaded Baked Potato Dip recipe is easy to make. A creamy dip with bacon is the perfect party appetizer when served with potato chips or waffle fries!

*See blog post for tips and answers to FAQs.