Home » Recipes » Side » Slow Cooker Corn On The Cob

Slow Cooker Corn On The Cob is a hands-off way to make corn on the cob ahead of time and keep it warm too. Use multiple crockpots to make corn for a crowd. 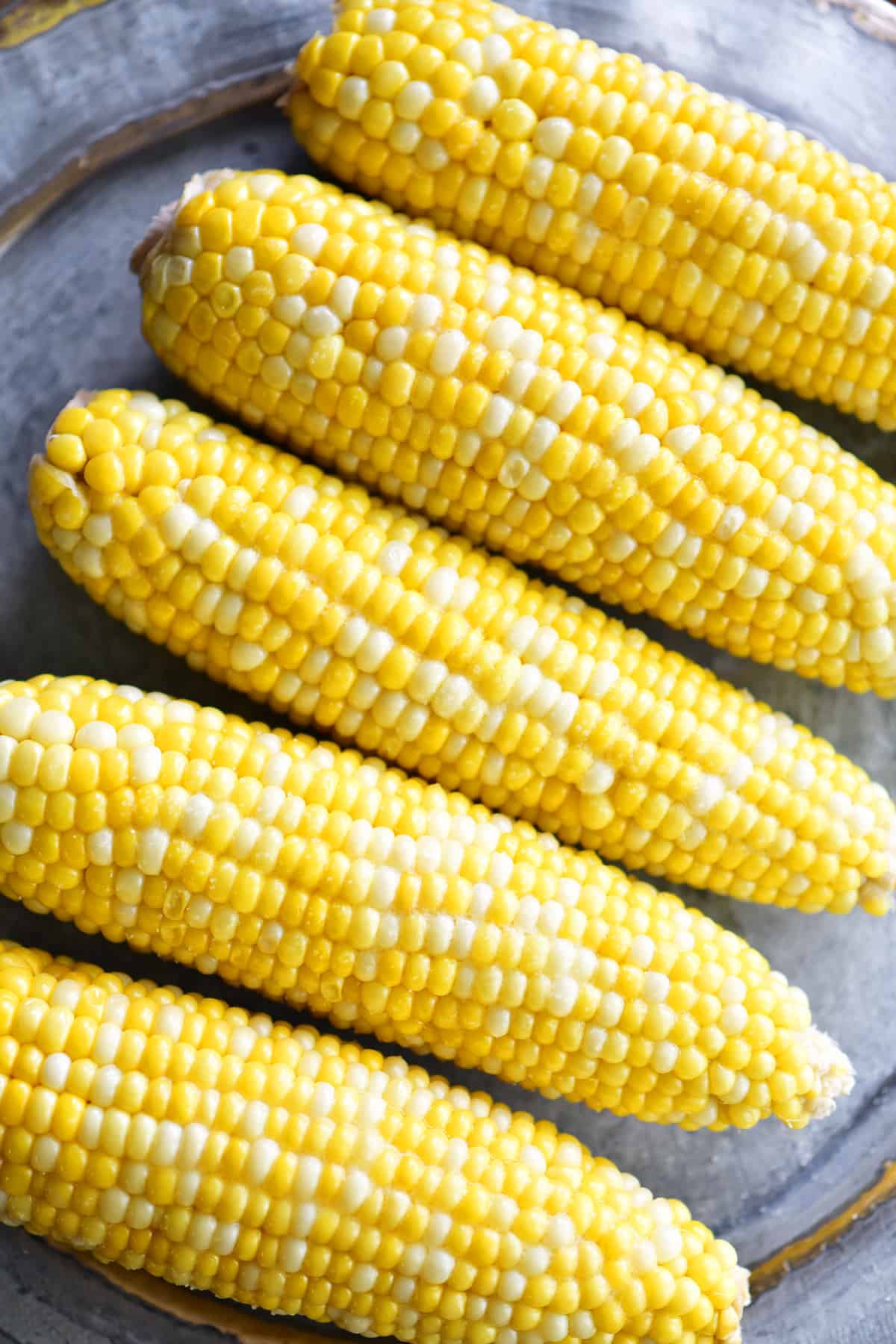 Where is the slow cooker corn on the cob recipe? In this post, I will share step-by-step instructions with photos for how to make the corn on the cob, as well as answering FAQs about the recipe and sharing a short video showing the recipe in motion. But you can go directly to the recipe by scrolling down to the bottom of the post.

How To Make Slow Cooker Corn On The Cob

Now that we’ve got the best corn on the cob, let’s cook it in the slow cooker! 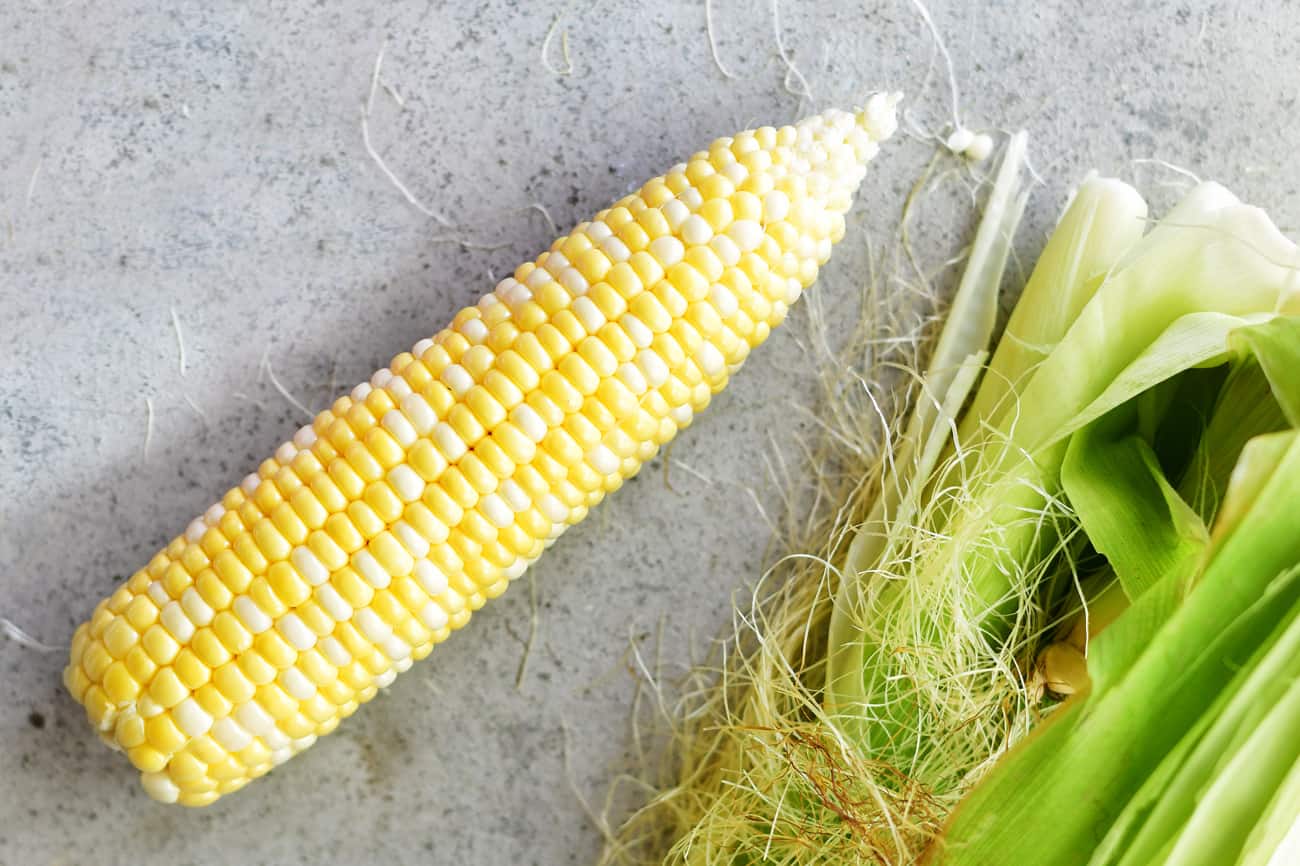 Start by peeling the corn on the cob. Firmly grab a few of the husks and some of the silks at the top of the cob and pull them downward and off. Continue peeling until all of the husks have been removed.

Then, remove any remaining silks and discard. 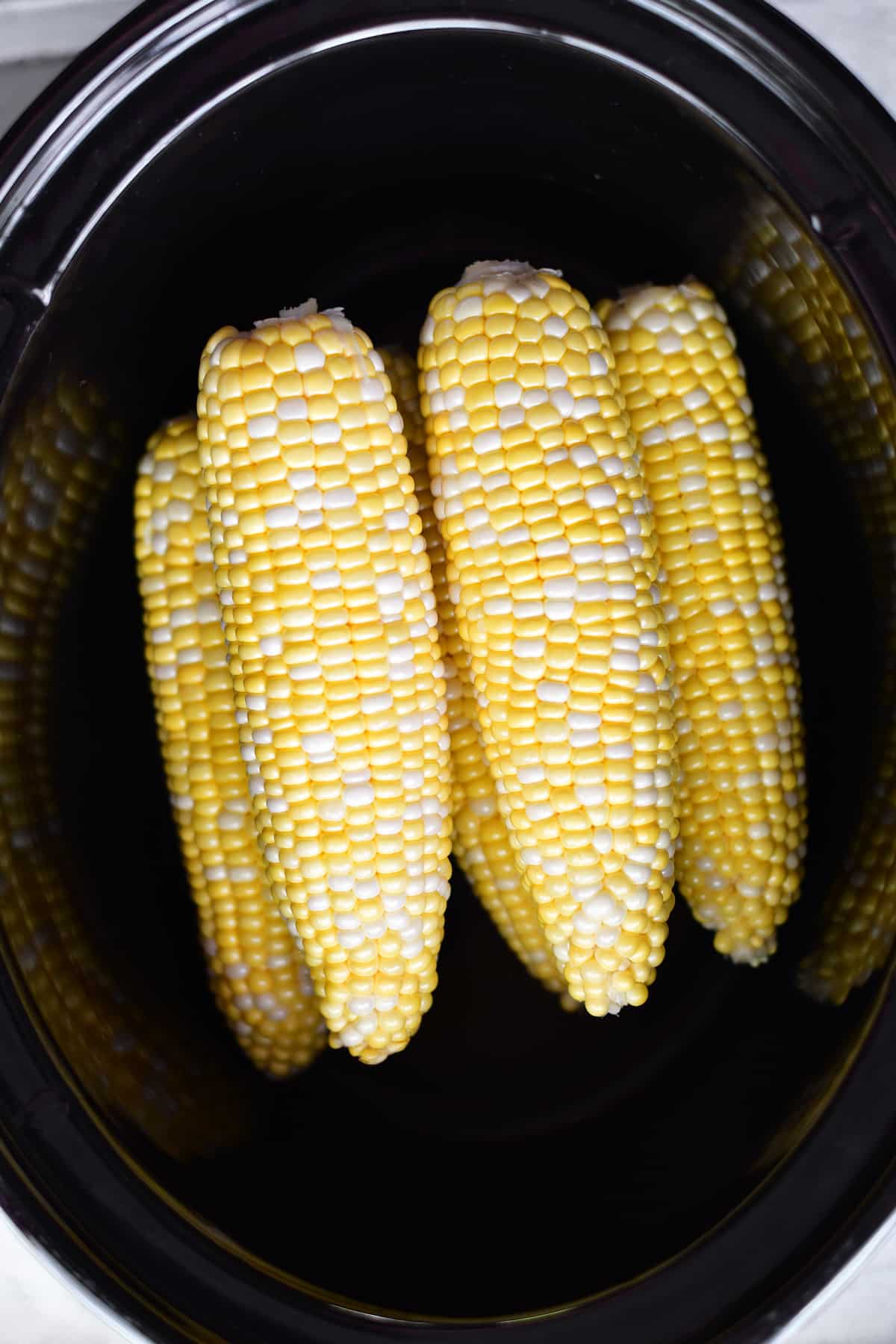 Stack the peeled corn on the cob in a large slow cooker.

If you want to fit more corn in your crock pot, you can cut or break the cobs in half so that all of the empty spaces can be filled.

When making corn on the cob for a crowd, use a large slow cooker like this roasting oven or multiple crock pots. 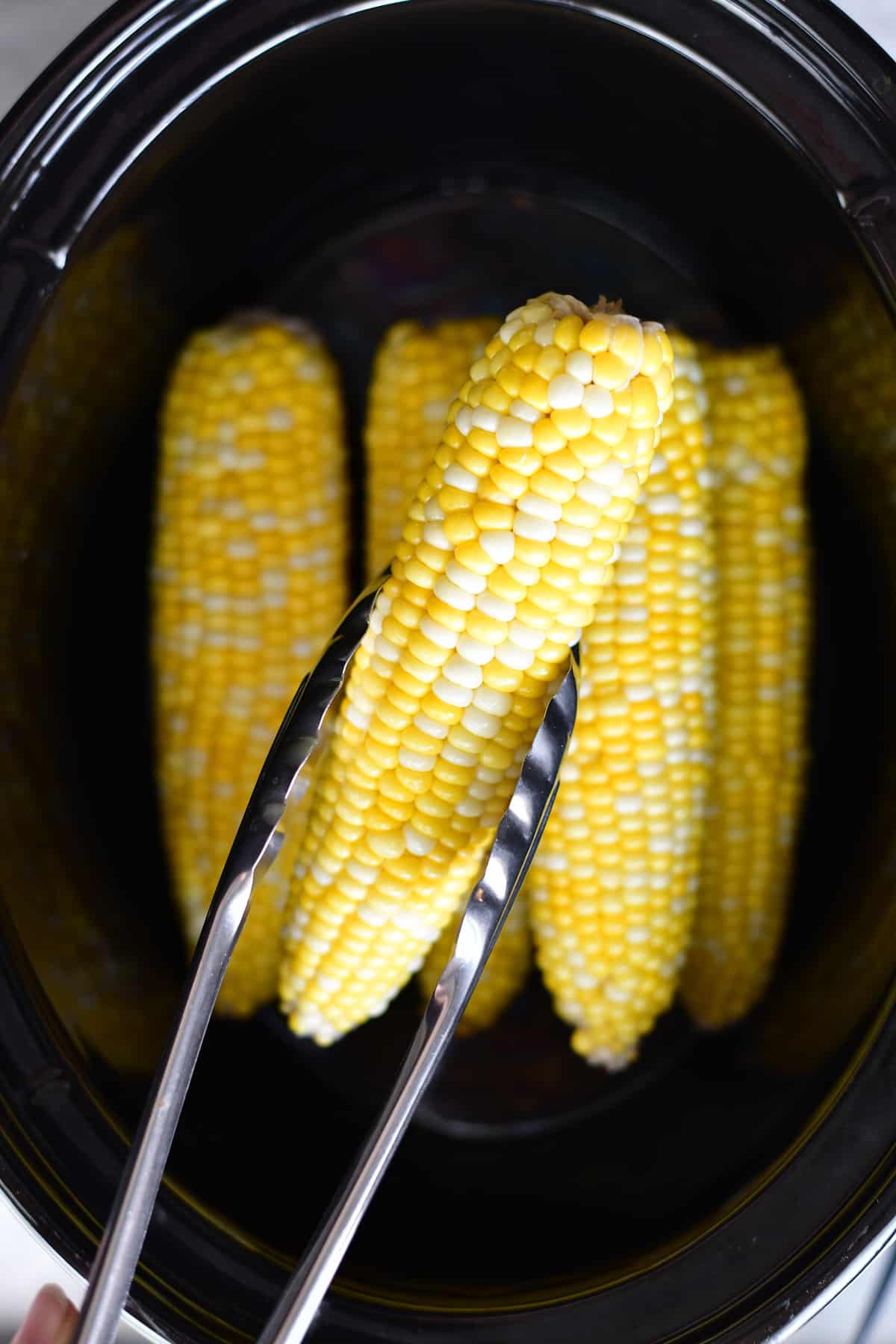 Add a little water to the slow cooker. The water will steam the corn on the cob and keep it from drying out. Then, put the lid on and cook the corn on high for 2-3 hours until hot and tender. 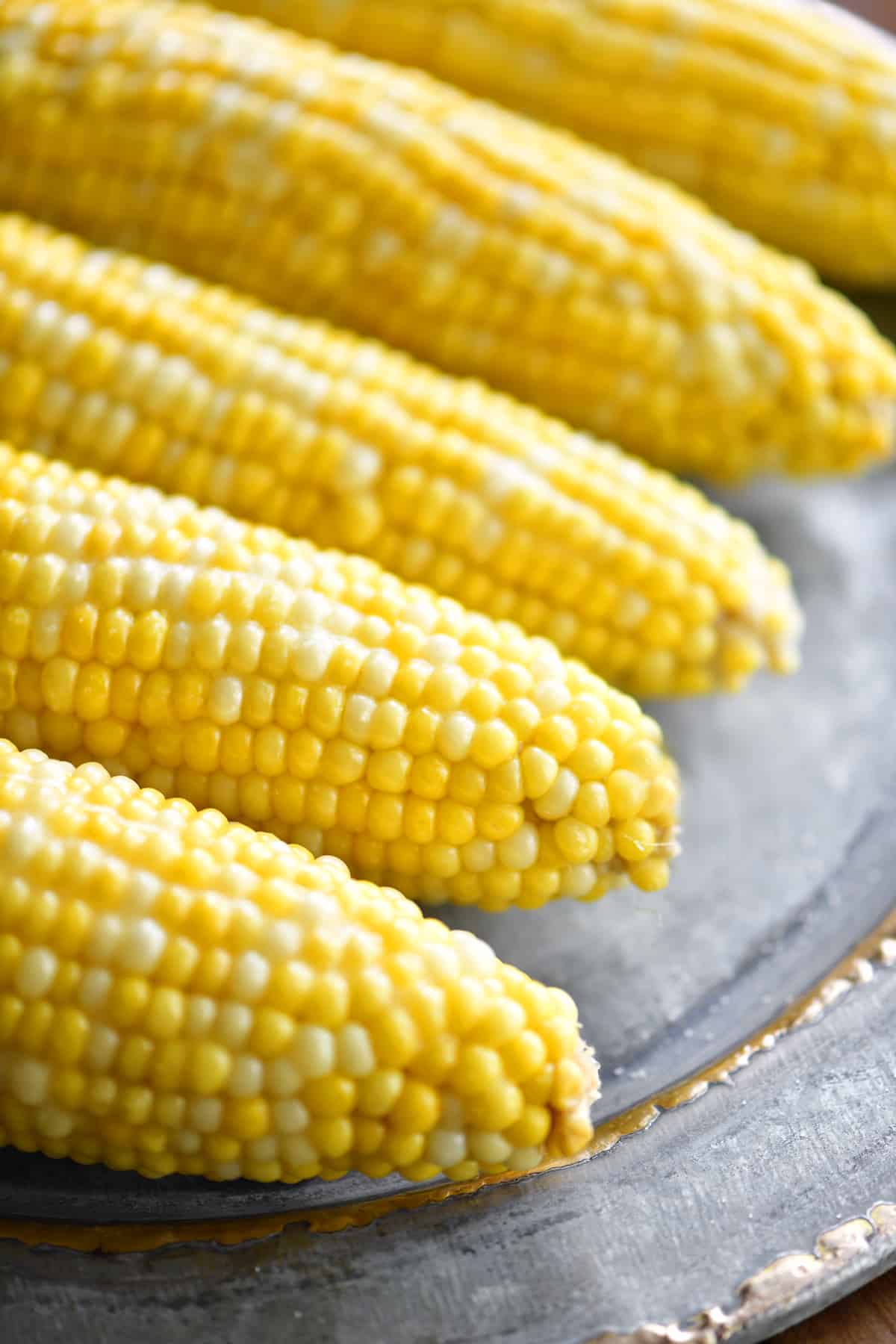 Once the corn on the cob is hot, it is ready to eat with plenty of salt and butter!

You can serve it right out of the slow cooker when serving buffet style or transfer the corn to a platter when dining at the table. 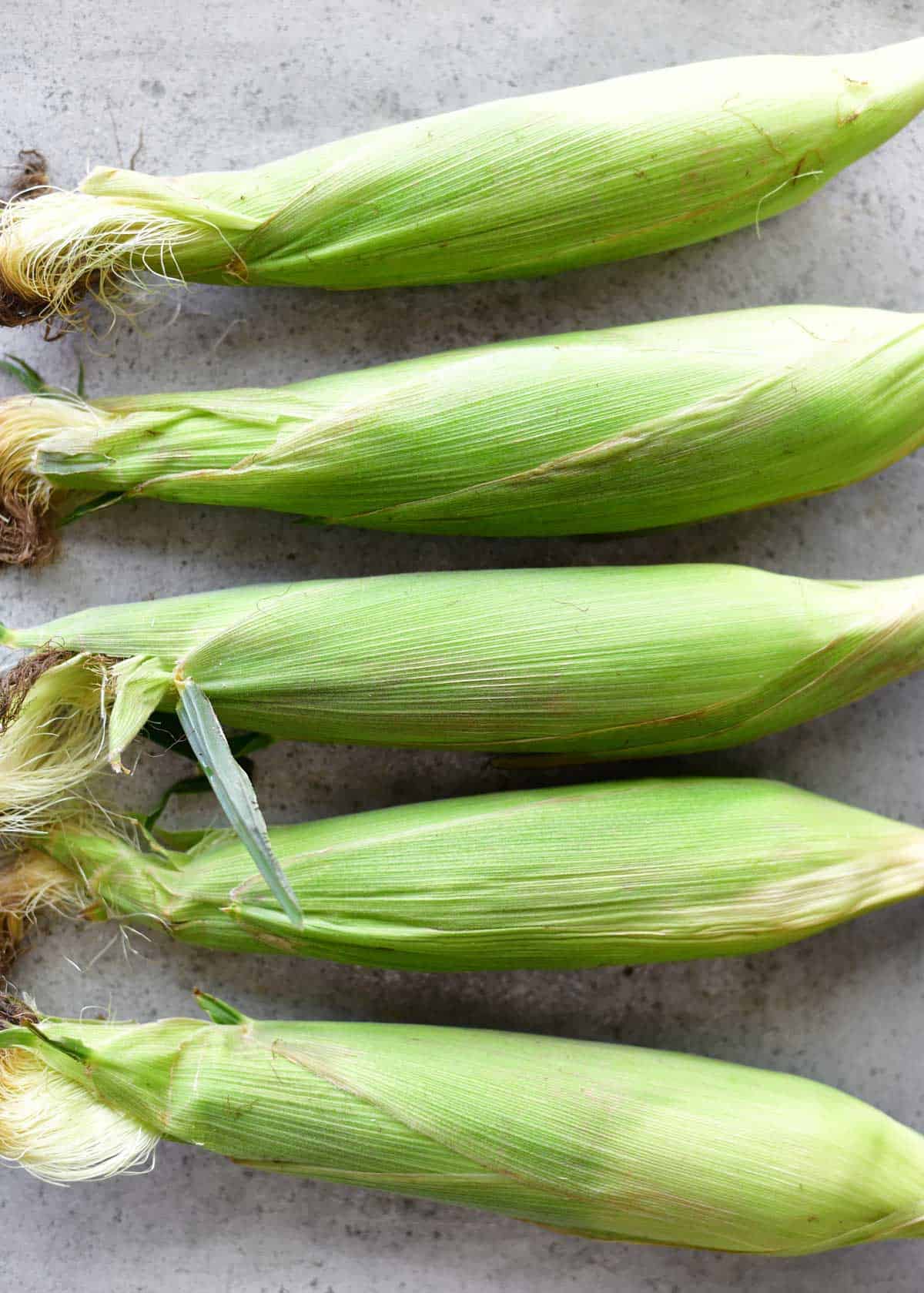 Can You Prepare Corn On The Cob In Advance?

Yes, you can definitely prepare corn on the cob in advance! The best way to do so is to cook in a slow cooker. Since it takes 2-3 hours to cook, you can spend that time getting other things ready for the party.

Peeling the corn is the most time-consuming hands-on part so get that out of the way early in the day or even the day before. Store the peeled corn loosely in a plastic bag in the fridge to keep it moist until ready to use (but don’t store it in the fridge for more than two days).

Then, a few hours before eating, put the corn in the crockpot, following the recipe below.

How Do You Keep Corn Warm For A Party?

The best way to keep corn warm for a party is in a slow cooker. Once the corn is cooked, turn the slow cooker to the warm or low setting, depending on your slow cooker, and remove the lid. If there isn’t already water in the bottom of the slow cooker, add a cup of hot water.

Using the slow cooker without the lid will allow the steam and heat to rise and escape keeping the corn warm without overcooking it. This warming method can be used no matter how you cooked the corn on the cob in the first place.

Always keep in mind that the best way to eat corn is immediately after it has been cooked, so don’t plan on keeping it warm in the slow cooker for a long period of time. 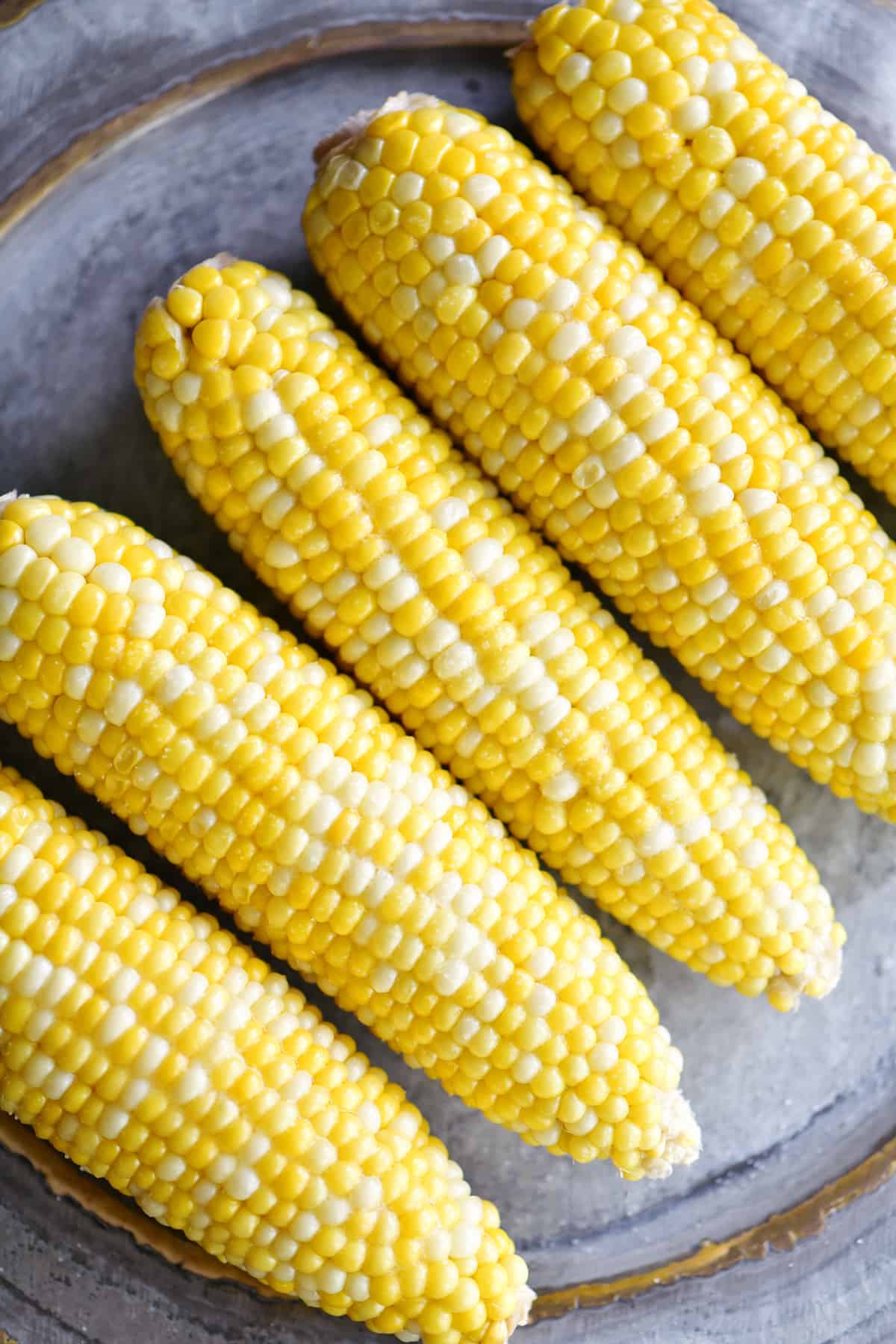 A frequently asked question is can I wrap slow cooker corn on the cob in foil? Yes, you can wrap it in foil but it is unnecessary.

The reason for wrapping corn on the cob in foil is to steam the corn but cooking it in the slow cooker with a little water and a lid does that for you. We suggest that you can make slow cooker corn with no foil and save the foil for something else!

What To Serve With Corn On The Cob

Here are a few of our favorite main dishes to serve with corn on the cob.

Butter Burgers On The Grill