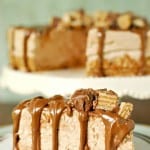 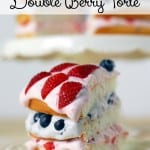 I made this red, white and blue, Double Berry Torte as part of a sponsored post for Socialstars, using strawberries and blueberries from the Walmart Produce department. Summer is the season of fresh fruit and it is something we wait for all year. Of course, you can buy fruit all year long, but once summer comes […] 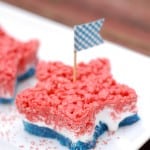 These patriotic, star-shaped, Ooey Gooey Red White and Blue Bars have a blue cake mix crust with soft marshmallow cream in the middle and red Rice Krispies treats on top. They are perfect for Memorial Day, 4th of July and Labor Day. With summer about to kickoff, I just couldn’t resist making another variety of […] 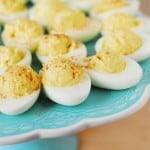 Spicy Deviled Eggs are the perfect way to use hard boiled eggs. Serve them as a party appetizer. This recipe is easy to make and so delicious! Disclosure: I have been compensated for this sponsored post by MIRACLE WHIP, as part of the Mom It Forward Blogger Network. With Easter just around the corner, everyone […] 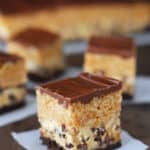 Chocolate Chip Cookie Dough Scotcharoos Bars are a dough bar with layers of cake mix cookies and scotcharoos with eggless cookie dough in the middle! I wasn’t sure what to make for my second cookie dough recipe. I did some brainstorming and then looked online and found that all of the great ideas I came […] 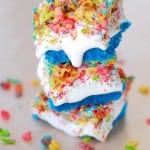 Funfetti Ooey Gooey Bars are fun to eat with a rainbow of colors. It’s a combo of a cake mix cookie bars recipe and Fruity Pebbles Bars recipe! Disclosure: Smuckers sent me free samples of some new products and I use the cake mix in this post. #smuckersfirsttaste I had big baking plans last week […] 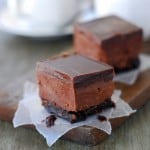 Chocolate Truffle Fudge Bars are melt-in-your-mouth delicious. These triple chocolate bars have a brownie base, a chocolate truffle layer and smooth chocolate frosting on top. A couple of weeks ago, I made some bars that were going to be served after church on Sunday. I didn’t know what to make, but as a food blogger, […] 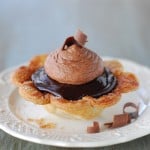 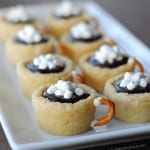 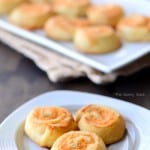 Disclosure: I am associated with Pillsbury through the holiday bloggers event. Pillsbury paid for my expenses and provided me with Pillsbury Dough Products to use while at General Mills. All opinions are 100% my own. This easy appetizer recipe for Sriracha Chicken Pinwheels using Pillsbury® Crescents is perfect for sharing at parties! T his year […] 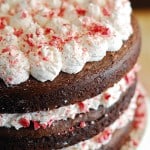 Chocolate and peppermint are the perfect combination for holiday desserts! This Chocolate Peppermint Torte recipe is a layer cake filled with peppermint cream frosting. With Christmas just around the corner, it is time for a holiday version of one of my favorite desserts: a torte (or cream filled layer cake). There were a few flavors […] 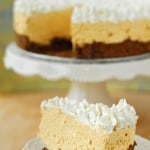 This Pumpkin Silk Pie is a delicious holiday dessert recipe that is easy to make. Pumpkin dessert recipes are perfect for holiday parties and this pie is a fun alternative to the traditional pumpkin pie. This post is sponsored by Nielsen-Massey. All opinions are 100% my own. Today I am sharing a dessert recipe for a […] 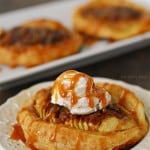 Everyone loves apple desserts during the holidays! Today I’m sharing a recipe for individual apple tarts made with a puff pastry crust.Every autumn we celebrate fall birthdays with a group of friends by going out to dinner and spending the evening together. Although we do get together with our families throughout the year, every autumn […] 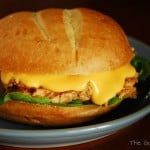 Although slow cookers can be used year round, the fall and winter months are perfect for warm meals from the Crock Pot. So, I’ve gathered more than 70 slow cooker and Crock Pot recipes to give you some inspiration for what to make for a family dinner or a holiday meal. There is everything from […]

Slow Cooker Pumpkin Cobbler is an easy way to make dessert! Just put everything in the crockpot and walk away. We are already more than halfway through October! Can you believe it? The weather has gotten cold here and it is way to early for that. I was hoping for a long, beautiful fall but […]

Pumpkin Recipes are everywhere this fall! Here are 50 Pumpkin Desserts to inspire some fall baking! I hope you are enjoying autumn as much as we are. We’ve had gorgeous weather so far and have been trying to spend time outside whenever we can. I’ve been making pumpkin desserts and I have a pumpkin scented […] 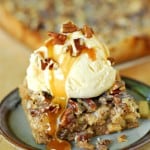 These apple bars are easy to make with a cake mix crust! This is my first of many apple recipes this fall. One of my favorite things about fall is apple desserts and apple recipes! Every year we spend a day or two at apple orchards in the area. They are already open for the […] 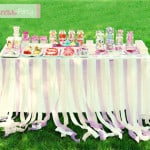 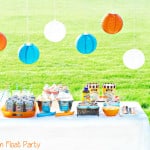 Root beer floats and summer go hand-in-hand! This ice cream float summer party is a fun twist on the traditional ice cream social. Today is the first day of summer and is there a better way to celebrate than with ice cream? I hosted an Ice Cream Float Party to kick the summer off to […] 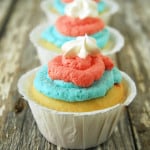 I’ve gathered together 20 patriotic crafts and recipes of my own and one from our Time To Sparkle link Party for Memorial Day and Independence Day. Happy Memorial Day! I hope you have having a wonderful weekend! We are planning to go to by inlaws house for a barbeque. I am so excited for all […] 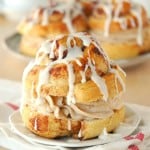 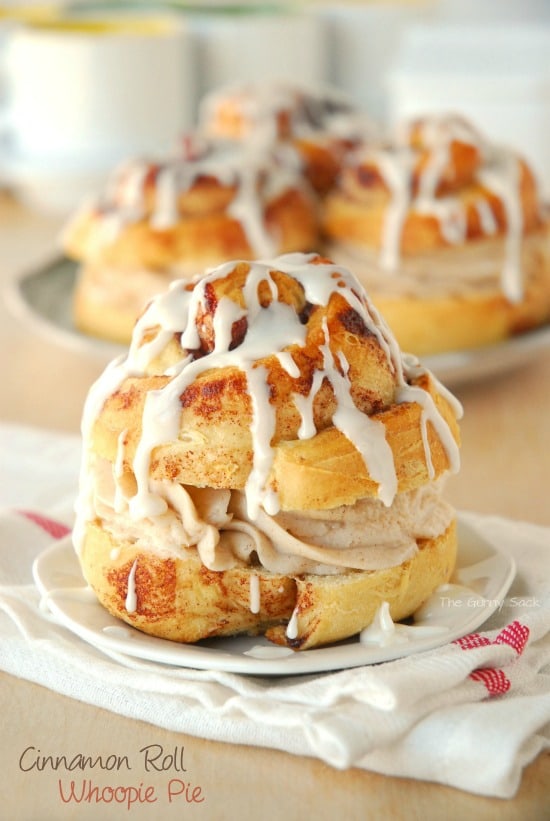 There is midwest gas station that I go to that has a great bakery. They make cinnamon rolls that have the most delicious cinnamon frosting on them. That frosting inspired me to try making my own version. Since I wanted to make cinnamon roll whoopie pies, I wanted my frosting to be more sturdy. Plus, I’ve had a lifelong obsession with buttercream so that had to be included and since cream cheese is the cinnamon roll frosting of choice that is in there too!

When I was a kid, the Target stores in our area sold baked goods from McGlynn Bakery. From what I remember, there was a small bakery counter at the front of the store where you could buy treats on your way out and they had huge frosted sugar cookies. You know, the kind with big piles of buttercream frosting in cute little shapes! I think they sold them for $1.00 a piece. I would save my money so that when I had the opportunity to go to Target with my mom, I could buy myself a frosted cookie! Yum! 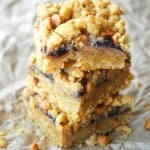 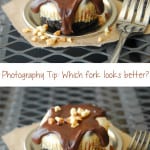 Here are some quick easy food photography tips for making food the focal point. It is about perspective and using small dishes and utensils. I have a never-ending fascination with photography and more specifically with how the photographer made the picture. I could spend countless hours learning about the process. I want to know what […] 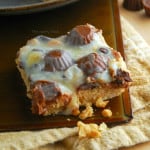 Peanut butter cookie bar recipe is topped with Reese’s Peanut Butter Cup Minis. This is another cake mix recipe that is easy to make and tastes delicious! It’s still National Peanut Month so let the peanut butter love continue, right? I made these bars a couple of weeks ago to bring to a friend’s house. […]

I wrote this post as part of a paid campaign with Plaid Crafts and The Blueprint Social. The opinions in this post are my own.     Are you ready for the start of the holiday season? With Thanksgiving next week and our first dusting of snow this week (it already melted), I am getting […]

I was recently asked to bring a dessert to a special occasion and I wanted to bring something pumpkin flavored. I found a recipe in a cookbook but the dessert said to make the topping with uncooked eggs whites. So, I decided to do a little research online to see if I could find a […] 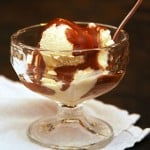 For those of you that don’t already know, I have a few addictions. They include coffee, chocolate and Diet Dr. Pepper! My husband is an even bigger Diet Dr. Pepper fan than I am and it is almost always available at our house. I decided to try combining 2 of my favorites: chocolate and Dr. […]

This post has been compensated as part of a social shopper insights study for Collective Bias™ and Smarties #CBias #SocialFabric    The 4th of July was pretty simple for us this year.  It was really hot so we met my family at a lake in the morning.  We had to stay in the water to […] 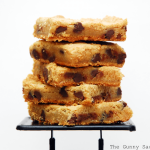 Last week, we had an estate/garage sale at my mom’s house.  My kids really wanted to do a lemonade stand for the sale, but it was cold and windy out… not lemonade weather!!  I know how much they look forward to setting up a little booth whenever we have a sale so I made them […]